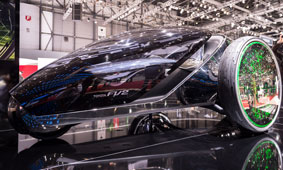 The Toyota FV2 concept has made its European debut at the 2014 Geneva Motor Show.

The future mobility concept was unveiled at the Tokyo motor show in 2013, and is designed to capture the spirit of Toyota’s fun-to-drive philosophy.

As you can see from the pictures, the FV2 doesn’t have a steering wheel. Instead, the car is operated by the driver shifting his or her body to move the vehicle forwards, backwards, left or right. It mirrors or responds instantly.

It also uses intelligent transport system technology to connect the driver with a variety of local safety information. Transmitted from other vehicles and infrastructure, this aids the driver with dangers such as blind spots or at at junctions.

Using voice and image recognition to determine the driver’s mood, the future concept picks up your preferences and habits, and learns to anticipate your needs and intentions. It will also accumulate a driving history to suggest routes and even determine the level of assistance needed based on the driver’s skill.

An augmented reality (AR) display can be shown on the windscreen and the body colour and exterior display can be changed at will to match the mood of the driver, creating an intimate relationship between car and driver that may well be the future of car personalisation.