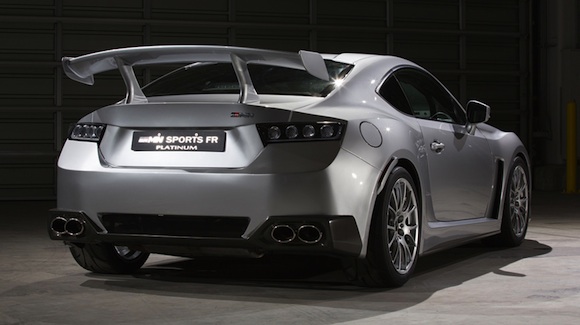 Gazoo Racing opened the Tokyo Auto Salon in style today by taking the wraps off its latest boldest Toyota GT86 concept yet. At the same time it confirmed its plans to compete in this year’s Nurburgring 24 Hours race.

Officially titled the GRMN Sports FR Concept Platinum, this new GT86 special is an updated version of the one that appeared at the Goodwood Festival of Speed last summer. And it’s every bit as powerful as its all-out styling suggests.

Using both a supercharger and turbocharger, the engine pumps out a mighty 326bhp. The reworked design’s just as strong, featuring an entirely new front end,  Supra-style LED headlamps and wide side skirts with scooped-out brake cooling vents.

The rear end gains a vast spoiler mounted on a reshaped bootlid. There’s also a new bumper with a diffuser to help generate track-hugging downforce, and a quad-tailpipe array, ringed with chrome. The LED tail lights are another retro-reference to the classic Supra IV.

On the inside, the concept gets a roll cage, four-point racing-style seat belts and all-new white leather bucket seats.

To handle the massive hike in power, the car’s suspension and brakes have also been upgraded, and it rides on racing-style alloy wheels.

Meanwhile, Gazoo also announced that it will take part in the ADAC Nurburgring 24 Hours in the spring, in updated versions of its GT86 and Lexus LFA race cars.

We’ll be publishing more on Toyota’s stars of the Tokyo Auto Salon through the day, so stay tuned.