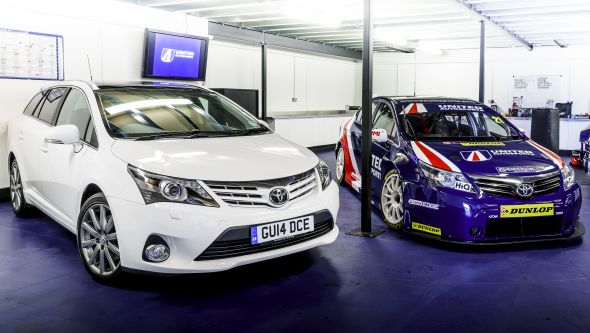 Such was the response to our recreation of a classic Corolla advert that we decided to continue the comparison between race- and road-going Toyota Avensis models back in the workshop of the United Autosports team. It would also prepare us for supporting the team this weekend in the seventh round of the British Touring Car Championship (BTCC) at Knockhill, Scotland.

The construction of an Avensis BTCC car begins with the same five-star safety rated monocoque passenger cell as the road-going equivalent, complete with identical quantities of high-tensile steel and number of spot welds. The only real structural difference is the inclusion of an all-encompassing roll-cage, installed by the race team to strict touring car regulations but with small, allowable differences in order to fit inside each vehicle.

Even the doors begin as identical units but are later extensively lightened because the roll-cage now provides adequate side-impact protection. However, it is not possible to reduce the kerb weight too far; BTCC regulations dictate that the front side windows must use original glass, and there is a minimum overall target weight of 1195kg.

Staying inside, the driving environment of an Avensis BTCC car is both reassuringly familiar and frighteningly complicated. An original soft-touch dashboard is installed but it has become little more than a bulkhead cover, shorn of the road car’s generous equipment and ergonomic layout in favour of confusing buttons around the steering wheel, one large bank of engine-related controls near the centre console, and a digital display that consolidates all major displays into a single, brightly-lit unit.

With regards to bodywork, the biggest departure from standard relates to how the engine, transmission, suspension and brakes are mounted; which is why Toyota only supplies the bodyshell from the A-pillar backwards. So whereas the production Avensis uses an established MacPherson strut front and double wishbone rear suspension setup, the race car has to comply with regulations and adopts standardised tubular subframe structures at both ends.

These subframes are used by all competitors in the BTCC and feature identical gearbox, suspension, wheel, tyre and brake components to level the playing field, so to speak. The way these subframes connect to the roll-cage is specified, and the only modifications allowed to the structures are in the construction of brackets to which the car’s external bodywork and light units can be mounted.

Standardisation is evident in the engine formula, too. A stock 2.0-litre turbo unit is available to lease or purchase from TOCA-BTCC but this United Autosports Avensis runs Toyota’s own 3ZR-based unit specially developed for the series and mated to the regulation six-speed Xtrac sequential gearbox via a unique bell housing.

Toyota went this extra mile to develop its own race engine because its ZR family of compact, lightweight petrol powerplants is already among the latest to deliver step-change benefits from Toyota Optimal Drive technologies. And it is only a short leap from maximising combustion efficiency for economy to optimising combustion for outright performance. No wonder that regular Avensis models suck fuel from their 60-litre tank at a rate as miserly as 72.4mpg on the extra-urban cycle, and the BTCC racer is equipped with a mid-mounted 80-litre fuel cell that is topped up via a quick-release filler beneath the offside rear light lens.

And that got us thinking. Whereas most of us would be delighted to fuel the race car for an opportunity to put it through its paces around a circuit, the thought of doing that for our everyday commute would soon grate on us. Similarly, the idea of being strapped into a race seat is very appealing but you wouldn’t choose that position over the comfort of heated and perforated leather seats over a long distance.

So while the genetics of these two cars are very closely linked, we can’t help feeling that we would prefer to have the Avensis road car in the garage and then lend our full support to the United Autosports team at each event in the BTCC calendar. Which, of course, we would have arrived at in comfort and safety and with wallet-pleasing frugality…