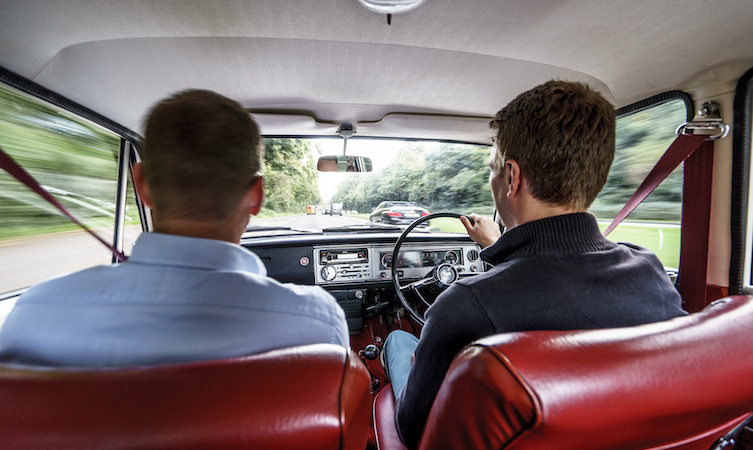 We’ve already detailed our trip to The Hague, in the Netherlands, to see the world’s oldest Toyota, the Toyoda AA, at the Louwman Museum. Read on to see what it was like to get there in our classic 1966 Toyota Corona.

Toyota entered the UK car market on 1 October 1965 with the official yet modest launch of the Toyota Corona. The svelte four-door saloon was honed for high-speed aerodynamic efficiency, wrapping a distinctive ‘Arrow Line’ silhouette around the sofa-like comfort of a luxurious interior.

Contemporary advertising proclaimed that each Corona was double-checked a hundred times before leaving the factory. And that the same procedure was then repeated before being exported. This attention to detail set new standards in build quality and reliability – attributes that remain synonymous with all Toyota vehicles.

Yet the 1965 Toyota Corona didn’t arrive in Britain with an astronomical price tag. The saloon model cost £777 including purchase tax and the estate version could be driven away for £829 – roughly equivalent to the price of a mid-range Toyota Yaris today.

Contemporary 1965 sales figures for this inaugural Toyota no longer exist but we do know that 5,488 Corona models were sold between 1965 and 1976, increasing to a grand total of 10,218 units by 1981 when the Corona line was discontinued in the UK. Among the first-generation cars, only three are known to still exist in the UK – and it is our understanding that the one now owned by Toyota (GB) as the spiritual grandparent within our heritage collection, is the oldest of the trio.

We could think of no finer way to continue our celebration of 50 years in the UK than to take Britain’s oldest Toyota on a road trip to meet the world’s oldest Toyota, an incredibly rare Toyoda Model AA from the very first year of vehicle production. As much as Toyota would also like to claim ownership of this sole surviving original example of the Model AA, the unrestored car is privately owned and now resides in the Louwman Museum in the Netherlands.

Watch the special stop-motion video below to see highlights of the road trip.

Driving a 50-year-old car is a very different experience to that of a modern machine. Across country, the Corona’s slow ratio, unassisted steering has your arms flailing around the pencil-thin wheel if you dare push past a genteel pace, while the apparent lack of brake power is another effective speed deterrent. The brake switch clicks audibly with the lightest of caresses but it feels like the brakes themselves require a written invitation to work: nothing less than a forceful shove on the middle pedal provides an appreciable degree of deceleration.

On the other hand, gentle encouragement into a motorway cruise reveals compliant suspension, cabin ambience that still allows for comfortable conversation, and relaxing straight-line stability. The floor-hinged throttle offers an incredibly shallow range of movement through the linkage – approximately one inch between idle and full throttle – but the pedal is also as convenient to use as a static footrest.

More than anything else, it is the Corona’s illogical quirks that really endear you to the experience of driving this car. There are no stalks protruding from the steering column, so pull toggles are used to control the lights, ventilation fan and windscreen wipers. There is a button on the floor next to the clutch pedal to activate the main beam, which therefore means it is impossible to change gear and dip the lights at the same time.

Despite, or perhaps because of, these eccentricities, our Toyota Corona proved to be a fascinating companion that drew admiring glances from all sorts of fellow travellers. Normal fluid checks were all the preparation it needed for the trip, and irrespective of traffic the temperature gauge stayed resolutely in the middle.

In fact, after stretching its legs into mainland Europe to meet its ancestor we are convinced the Corona has been given a new lease of life. Perhaps it really is true that 50 is the new 30.