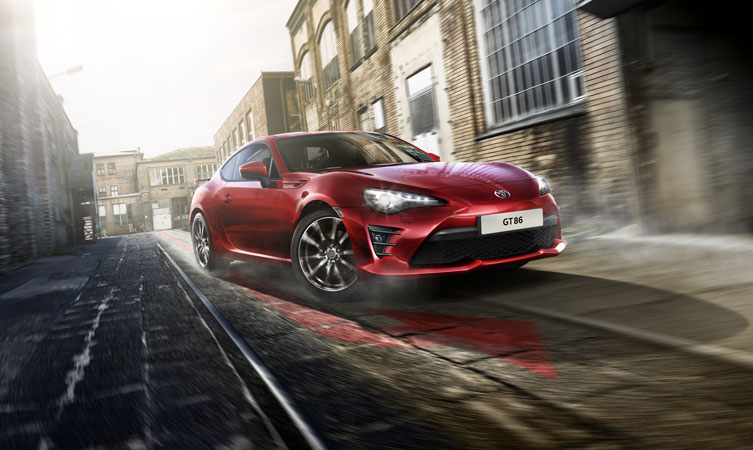 When a car has attracted so much praise and won so many awards for its driver-appeal as the Toyota GT86, you might think that there’s little room for improvement. Think again. A new, 2017 GT86 is about to be launched, promising an even better experience behind the wheel.

This is not a cosmetic facelift: when it comes to dynamic character, “we’ve remade everything,” the car’s chief designer, Tetsuya Tada (pictured below), declared.

Top priority for Tada-san’s development team has been to further hone the handling of the classic front engine/rear-wheel drive coupe. This has included tuning the electronic control systems, resulting in a new selectable “track” mode that lets the driver tap into the GT86’s full potential by adjusting the level of stability and traction control, including a “fully off” option.

The word “track” is used with justification, the logic system having been fine-tuned with the benefit of data gathered from the GT86’s racing performance in the full-on challenge of the 24 Hours of Nürburgring.

Chassis quality has also come under close scrutiny: “The biggest point I wanted to improve was the car’s responsiveness – on and off acceleration, turning in and turning out, and the speed and naturalness of its reactions,” said Tada-san.

“This has partly come from modifying the dampers and springs, but the biggest point of influence has been in aerodynamics and the way this affects the suspension.”

The work invested in this area can be seen in the car’s styling changes – new features that are not just about looking good, but which have a specific dynamic purpose. This even includes the new “teeth” featured along the bottom edge of the lower grille in the redesigned nose section, which help smooth the airflow There is also a new, deeper rear bumper design and aero-stabilising fins have been introduced on the side of the car.

Under the skin the body structure has been made stiffer, particularly at the rear where additional spot welding has been introduced and key components have been made thicker. The Showa shock absorbers have been retuned for better handling and ride comfort.

True to the spirit of the dynamic improvements to the GT86, the cockpit has been revised to create a more connected feel between driver and car. Central to this is the new three-spoke steering wheel, the smallest yet deigned for a production Toyota (diameter 362mm). The wheel’s cross-section has also been precision-calculated to provide the best possible grip and feel. Auxiliary audio and display controls have been added to the wheel and, as a finishing touch, the centre boss features a prominent silver 86 logo.

A new 4.2-inch TFT multi-information display is included in the instrument binnacle’s triple-dial arrangement with a switchable menu that provides familiar journey distance and fuel economy information plus more performance-focused data, such as power and torque curves, stopwatch and a G-force monitor. In a small but telling detail, the tachometer has been reoriented so that 7,000rpm – the point of peak power delivery – sits invitingly at the top of the dial.

The instrument panel has a one-piece design with a black finish with new carbon-fibre-pattern detailing.

The GT86’s “face” has been sharpened with new headlight units that create a stronger horizontal emphasis. LEDs are used for both low and high-beam and the turn indicators have been relocated from the front bumper to within the headlamp clusters, presented as a range of individual orange LEDs that harmonise with angled arrangement of the white daytime running lights.

The rear lights have been reworked, too, again generating a stronger horizontal effect with new light guides for the LED tail lights.

The 2017 GT86 is offered in a simplified range that features two versions: GT86 and GT86 Pro, both of which are powered by the established 197bhp 2.0-litre “boxer” engine with six-speed manual or automatic transmission.

The GT86 Pro adds heated front seats, leather and Alcantara upholstery, a leather driver’s armrest and a sporting suede-effect finish for the dashboard and door trims. It also gains a rear spoiler, finished in matt grey (if customers prefer, this can be deleted at no extra cost).

Key options include black cloth upholstery with red inserts on the seats and door trims for the GT86, and a similar treatment for the part-leather and Alcantara seat and door coverings in the GT86 Pro.

The new 2017 Toyota GT86 goes on sale at the beginning of October. Prices are detailed below.