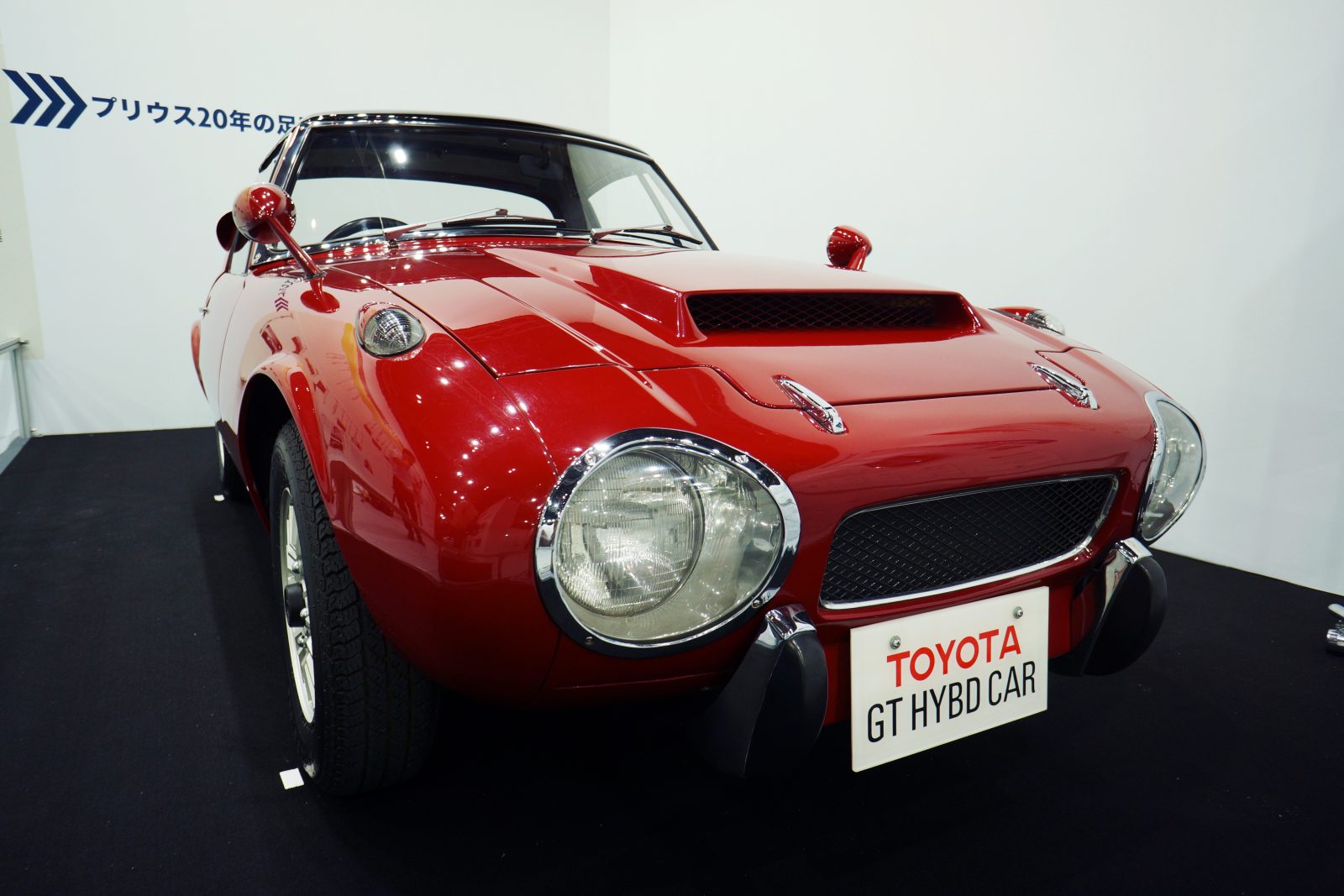 Unveiled in 1977 in the brief calm between two world oil crises, the Toyota Sports 800 Gas-Turbine Hybrid concept marked an important chapter in the history and development of our hybrid powertrain.

It illustrated the progress that Toyota had already made in 12 years of research and development into the economy potential of vehicles with dual power sources. And while there was still much to learn in the 20 years before the launch of the first-generation Prius, the powertrain found in the little coupe bears a striking similarity to the hybrid system that has now been installed in more than 14 million vehicles.

But before we talk about the Sports 800…

From the start of official studies in 1965, it took a decade for Toyota’s hybrid powertrain project to produce something truly tangible for the public. That landmark moment was the unveiling of the Toyota Century Gas-Turbine Hybrid prototype (below), revealed at the 21st Tokyo Motor Show in October 1975.

As you can see, there was nothing particularly remarkable about the appearance of this Century. However, under the bonnet, the flagship model’s V8 had been replaced with a gas-turbine engine. Unlike other jet-powered experimental vehicles of the time, it was not connected mechanically with the rest of the drivetrain. Instead, it was used as a means to charge a bank of batteries that in turn powered two electric motors, one for each of the front wheels.

It was therefore the dual power source – the collaborative effort of both an internal combustion engine (ICE) and electric drivetrain – that made this car a hybrid. And it was the basic structure of this self-charging system that set Toyota off on its hybrid engineering adventure.

Why were gas-turbines chosen as the ICE in Toyota’s first hybrid prototypes? Jet engines typically have a high output and can run on almost any combustible fuel. They are also compact and light and therefore help redress the issues associated with carrying a large battery pack.

These qualities were probably not successfully conveyed in such an exclusive flagship saloon. So the engineers continued their development, downsizing and repackaging the system (above) into one of the smallest, lightest and coolest Toyota models of recent years – the diminutive Sports 800.

Revealed at the Tokyo motor show in October 1977, the Sports 800 Gas-Turbine Hybrid prototype sent the message that Toyota’s hybrid technology was improving and that it was becoming more attainable. But you could also say that it was by no means perfect.

The production Sports 800 was known for its giant-killing performance, yet the Sports 800 Gas-Turbine Hybrid was almost double the weight (1000kg versus 580kg) and offered one third less power (30bhp versus 45bhp). No economy figures were ever released for the prototype but considering the relatively narrow power band and high thirst of a jet engine, it probably wasn’t that economical to run.

Similar to the set-up seen in the Century prototype, there was no mechanical connection between the gas-turbine and the driven wheels. But in order to transfer torque to the wheels, the above schematic shows that mechanical power from the gas-turbine first had to be converted into electrical energy by a generator. This energy was then converted from a fixed DC input voltage to a variable DC output voltage by a chopper inside the electricity control unit, which, in turn distributed that current either to the boot-mounted battery or the electric motor.

A more straightforward, single electric motor set-up was used on the Sports 800 Gas-Turbine Hybrid prototype in order to retain the car’s classic front-engine, rear-wheel drive configuration (see above layout). Torque was sent through a clutchless, two-speed transmission into a mechanical differential, which then distributed the drive power between the wheels.

Following the Tokyo Motor Show in 1977, the little Sports 800 Gas-Turbine Hybrid dropped off the international radar but it made a surprising re-appearance in a special nostalgia-themed showcase at the 2009 Tokyo Motor Show. We do not know what had happened to this car from a developmental perspective in those 32 years. However, comparing the before photo (see lead image), with the more recent photos used within the rest of this article, it had sprouted a large bonnet vent, alloy wheels and a black roof panel.

Where did the hybrid programme go after 1977?

It was at this point that Toyota’s further development of the ICE-electric hybrid system separated from the development of the gas-turbine engine. The former famously went on to adopt fuel-efficient petrol engines running on the Atkinson combustion cycle, while the more favourable torque characteristics of the latter escalated the gas-turbine powerplant to the point where it gained official certification for bus-use.

Ultimately, Toyota’s gas-turbine project never saw commercial use and was terminated after the creation of the sophisticated GTV grand tourer concept (see above) displayed at the Tokyo motor show in 1987. But the project left one final hurrah in that the GTV’s innovative continuously variable transmission formed the basis for the transmission found in the Prius.