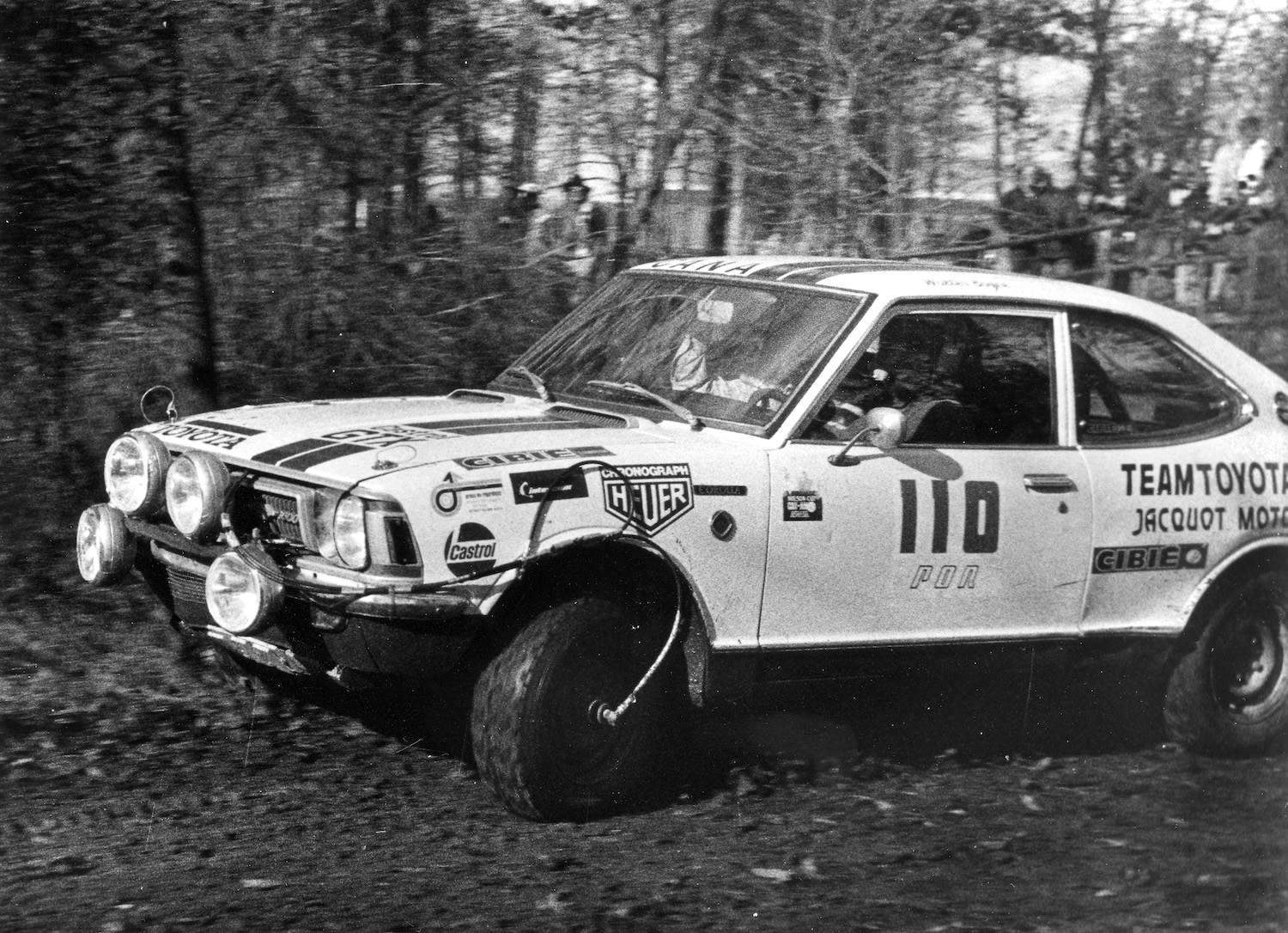 Over more than two decades, Team Toyota Europe (the precursor to Toyota Gazoo Racing) established the brand as a force in the World Rally Championship (WRC), beginning with Hannu Mikkola’s 1975 victory in Finland. Less widely known is that Toyota’s first WRC win was achieved by two Canadians rallying in the USA, in the very first year that the World Championship was contested. At the Press-on-Regardless (POR) Rally in 1973, Walter Boyce and co-driver Doug Woods steered their privately entered Corolla 1600 Coupé to victory on the roads of Michigan.

Walter had already won the first of five straight Canadian national rally championships when in May 1971, he bought a Corolla from Toyota Canada to compete in the British Columbia Centennial Rally. He retired from the gruelling Trans-Canada event after a problem surfaced with the engine mounts, but fixed the issue and won the Canadian championship for Toyota that year.

As a privateer, Walter and his crew prepared the car themselves, using the facilities of local Toyota dealer, Jacquot Motors. By 1973, Walter had his second Corolla and had upgraded the engine to a 2T-B with twin downdraught carburettors, added a fifth gear and modified the front suspension. The finishing touch was a wider set of steel wheels from an early Chevrolet Corvair.

Walter and Doug were fresh from victory on the Critérium du Québec when they headed south of the border for the ’73 edition of the prestigious POR, where they had competed each year since 1969.

Work commitments kept Walter away from the recce, during which Doug made pace notes with another Canadian driver, Randy Black, who would later win two Canadian championships of his own. Doug was familiar with pace notes from having rallied in Europe that summer but remarkably, when Walter took the POR start on Halloween in Detroit’s Belle Isle, it would be the first time he had used them.

The Press-on-Regardless rally was a World Championship event, but of the European-based factory teams, only the Polski-Fiat outfit made the transatlantic trip. A win was there for the taking, but far from assured on the tough road conditions of Lower Michigan and its Upper Peninsula.

“The Michigan truck trails were opened for the logging industry,” Walter remembers. “They were natural roads and had some extremely sandy spots, usually in Lower Michigan. You always wanted to put those soft sections behind you because they could be challenging, but I didn’t mind the sand. If you came across a really deep rut, then you just didn’t put your wheels in it. And you didn’t lift off. The ruts could be rails to keep you on the road!”

The 1973 POR was a test of endurance as well as speed. Crews had to tackle no fewer than 80 special stages over four days of competition and a 1,700-mile route. The previous year’s rally had been won by a four-wheel-drive Jeep Wagoneer, but this time both of the works-supported Jeeps retired.

“Doug assured me that we were going to win,” Walter continues. “He was an outstanding mentor, team manager, coach, and co-driver. He had every confidence that I could do as he directed through the pace notes, keep us both safe and go like hell!

“The POR had a reputation for biting people, and it was not until after the very last stage of the rally that I started to feel comfortable. All we had to do was complete the road section to the finish, but then we had a problem when a small, $2 heater hose failed. My crew chief, Robin Tyler, had trouble getting the hose on. In the end, I just jammed it on.”

The #110 Corolla survived, and Walter and Doug took the victory ramp to claim theirs and Toyota’s first WRC victory.

“We had achieved something unique,” says Walter Boyce. “Almost immediately I received a congratulatory telegram from Toyota in Japan. My wife Leslie and I enjoyed a wonderful couple of weeks there as Toyota’s guests. I’m not sure why Doug wasn’t invited, but he should have been – my success at the POR could not have happened without him. I remember struggling home through customs with about 40kg of Toyota Racing Development (TRD) parts in each piece of hand luggage!”

In a contemporary event report, Motor Sport magazine said of Walter Boyce’s performance on the 1973 POR: “Boyce is no big fish in a small pond; he is a smooth, tidy, fast driver who ought to do very well indeed if given the opportunity to broaden his horizons and pit his ability against that of European professionals.”

Walter never got his chance in a works car against the world elite, but for ’74 he built a twin-cam Toyota Celica with which he contested the two North American rounds of the WRC – the POR and Canada’s Rally of the Rideau Lakes. At the latter, he and British co-driver Stuart Gray finished third behind rally greats, Sandro Munari and Simo Lampinen.

Walter later sold the custom-built Celica to Toyota Canada, for whom Taisto Heinonen won Canadian championships, before rallying a number of different machines on both sides of the border. In 1986, his last season before retirement, Walter won Group A of the US-based SCCA Pro Rally Championship and a Group A North American Championship. He was inducted into the Canadian Motorsport Hall of Fame in 2003.

Speaking to us from his home in Ottawa, Walter Boyce looks back on his time rallying Toyotas with great fondness.

“The Corolla was a very balanced car, very responsive, and the quality of assembly was very high,” he says. “The car was overbuilt – you could put 50% more horsepower or stress through any component it without concern about lubrication, or a connecting rod issue, or weakness of anything at all. The clamshell T-type transmission was also the nicest I’ve ever worked on, so much so that we used it in the Celica as well.

“When a car comes out of the garage and goes to the rally, there’s no reason why it shouldn’t finish if you’ve done your work right. Sometimes you need a little bit of experience and luck, but the Corolla was a very sturdy platform, even though it was basic by modern standards. I’ve seen a vintage Corolla driving around Ottawa in recent years and I can’t believe how small it is compared with today’s cars!”