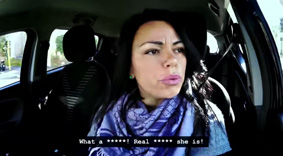 Driving a car in traffic is a stressful experience – 93% of drivers in a recent survey stated they found driving more stressful than other means of transportation. The research also identified three main factors that make driving stressful – the brain works harder, anger builds up and frustration significantly increases.

To understand the causes of stress on the roads, i2 media research at Goldsmiths University of London, one of the UK’s most prestigious universities, conducted a study in partnership with Toyota to analyse drivers’ emotions when driving hybrid and non-hybrid cars in heavy traffic. The study took place in Rome, one of the world’s worst cities for traffic.

When asked to reflect on their emotions driving hybrid cars compared to non-hybrids, over 80% per cent of the study sample reported feeling less angry, frustrated, or stressed, or happier and calmer in a hybrid car relative to a non-hybrid car.

The study was conducted with a cross-section of drivers all of whom regularly drive in traffic in Rome. The study was designed by Professor Jonathan Freeman, Managing Director of i2 media research in the Department of Psychology at Goldsmiths. It evaluated participants’ facial expressions and voice characteristics to determine how emotional (stressed or happy) they really were after driving a petrol or diesel and a Hybrid car.

Professor Jonathan Freeman says, “The Traffic Stress Report has generated a rich source of data. For example, it is interesting to see that when asked to reflect on both experiences, drivers reported being happier and calmer when driving a Hybrid rather than a petrol or diesel car in heavy traffic.”

More than 2 in 3 of the European population live in cities, with expected +10 per cent increase towards 2050. This means a significant amount of anticipated road rage will be experienced on the road over the years.

“The type of vehicle being driven appears to impact drivers’ emotions when they have to drive through heavy traffic. Interestingly, self-reported negative emotions were significantly reduced in the Hybrid vehicles relative to the non-Hybrid vehicles. Indeed, when we interviewed our participants after the experiment, they reported enjoying driving a Hybrid more than a non-hybrid.”

Overall, the research shows that driving a Hybrid car can provide for a happier and more enjoyable driving experience, with participants reporting that they tended to feel more ‘secure’, ‘enthusiastic’ and ‘strong’ compared to how they felt in non-Hybrid cars which tended to make them feel ‘jittery’, ‘distressed’ and ‘upset’.

Where next?
#LoveHybrid? These owners do
Hybrid Cars: An Introduction
8 things you didn’t know about know about hybrid