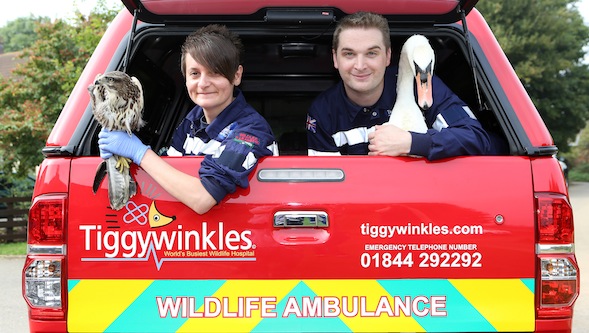 Toyota has donated a Toyota Hilux Double Cab to the Tiggywinkles wildlife hospital, to assist in its work rescuing and caring for injured, sick and orphaned animals. The ‘Invincible’ model pickup replaces the hospital’s trusty 4Runner model, which was provided by Toyota 20 years ago.

A registered charity, Tiggywinkles is based near Aylesbury and has been rescuing, treating and rehabilitating British wildlife for more than 30 years. Run entirely on donations, the charity deals with more than 10,000 animals in need each year and operates the world’s busiest wildlife hospital, tending to everything from hedgehogs and badgers to deer and swans.

The all-wheel drive Hilux Invincible Double Cab is ideally equipped to meet Tiggywinkles’ needs, which include transporting  team members to locations that are remote and hard to reach.

The vehicle has been specially adapted for its role. Ground clearance  has been increased and a snorkel exhaust unit has been fitted, and a Truckman top has been installed over the rear deck. A roof rack, high-mounted LED lighting bar, front winch, towbar and Tiggywinkles livery round off the modifications.

In spite of its go-anywhere abilities, the Invincible delivers car-like comfort and convenience. There is seating for up to five, and it comes complete with cruise control, electric windows, heated door mirrors, automatic air conditioning and Toyota Touch touchscreen multimedia system with Bluetooth and a rear-view camera. Safety is assured, thanks to front, side and curtain airbags, ABS and Vehicle Stability Control. Hilux’s legendary reputation for reliability provides further peace of mind.

Tiggywinkles Founder, Les Stocker, said: “We’re grateful for Toyota’s continued practical support for the work we do. Having a vehicle we can rely on to get our teams safely to where they’re needed, no matter what the conditions, is vital for our work. The new Hilux will be a great, lasting asset and will be of particular use when we need to transport the larger animals we care for.”

Thomas Rosselle, Toyota Manager, Corporate Social Responsibility and Environmental Affairs, added: “We’re delighted Tiggywinkles enjoyed two decades of faultless service from the 4Runner. When we heard that the time had come for the vehicle to be retired, we thought the Hilux would be the perfect replacement and we hope the charity enjoys many more successful years with its new Toyota.”

For further information about the Hilux range, visit the designated section of the Toyota UK website. Find out more about the work of Tiggywinkles here.