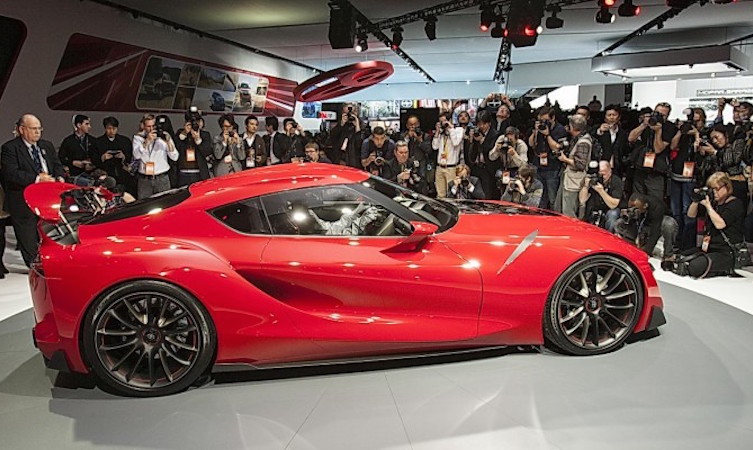 As traditional would have it, the Detroit motor show should be dominated by announcements from US-based carmakers, what with it being their ‘home’ event – but Toyota has ripped up the rulebook and stolen the headlines on more than one occasion.

Whether it’s a forward-looking design study, an innovative engineering showcase or a eye-catching sports coupe vision, Toyota concept cars have a rich history at the North America International Auto Show (to give it its formal title).

Scroll down to see the top Toyota concept cars revealed in Detroit since 2000.

The FT-1 is one of the most significant concepts unveiled by Toyota in recent years – and with such stunning styling and perfect proportions, it’s no surprise that it’s one of the most popular too. The design study, created by the US-based design studio CALTY, explored the possibility of a future Toyota sports car.

FT-1 debuted in Detroit in a vibrant red shade in 2014, before appearing again last year with new graphite grey paintwork. It’s also appeared on the Jay Leno’s Garage web series, in the Gran Turismo video game and made a surprise real-world appearance at a Cars and Coffee event in California.

Find out more about the Toyota FT-1 here

The Corolla Furia was revealed at the 2013 edition of the show, and signalled a significant shift in design for the Corolla – the world’s best-selling car. With its more angular front-end design and raked back windscreen it pointed to a more sporty and assertive direction for the model.

Toyota revealed the NS4, an advanced plug-in hybrid concept, at the 2012 show. It exemplified Toyota’s vision for future mobility, with a focus on next generation connectivity and safety.

It even had rain-resitant, anti-fog, UV-absorbing, anti-solar glass to provide the optimum safety and comfort to passengers.

Lighting the way to the Prius c model that is now on sale in the US and in Japan as the Prius Alpha, the wraps came off the Prius c concept at NAIAS in 2011.

The ‘c’ stands for ‘city’-centric as the car is more compact than the Prius.

Somewhat of a precursor to the Prius c, the FT-CH took its Detroit bow in 2010. It displayed luminescent green-yellow paintwork and was designed by ED², Toyota’s European design centre in the south of France.

Based on the diminutive Toyota iQ, the FT-EV was a testbed for electric vehicle technology within an existing Toyota model.

It displayed a re-worked ventless front-end design and had a purported battery-only range of 50 miles. Two further versions – the FT-EVii and FT-EViii were later made, and shown at the Tokyo motor show later in 2009 and in 2010 respectively.

Toyota opted to focus on engineering when producing the A-BAT concept for the 2008 Detroit motor show. Instead of using a traditional body-on-frame truck architecture, it had a car-like unibody platform for an improved ride and sharper driving dynamics. In another twist on the truck formula, it had a four-cylinder Hybrid Synergy Drive system under the hood, instead of a V8.

The Toyota FT-HS – or Future Toyota Hybrid Sport – was given its public premiere at the Detroit motor show in 2007. Designed by CALTY, the rear-wheel drive sports car had four seats in a 2+2 layout, and a targa-style retracting convertible roof.

Statements at the time suggested the car’s engineers aimed for a 400hp power output and a 0-60mph time of around 4 seconds – this would be achieved by using a 3.5-litre hybrid system and a capacitors created specifically for quick charging and increased performance – not totally unlike what is now used in the Toyota TS040 Hybrid World Endurance Championship car.

Looks closely and you’ll see that many of the concept’s styling touches were used in the Toyota GT86, which arrived on UK roads five years later in 2012.

‘Toyota has introduced living-room like space and style to the motoring world with its latest concept vehicle, the funky F3R.’ – so said the launch announcement of the F3R concept back in 2006.

The F3R is a creative and sporty take on the minivan, and was created by Calty and the Toyota’s California-based Advanced Product Strategy group. The car’s designer said at the time: “Younger people are hanging out in their cars. When they do that, the car becomes an entertainment area. The F3R expands on that concept. It’s a sophisticated extension of the home.”

Designed to combine the ride comfort, handling and fuel efficiency of a saloon with the utility, spaciousness and visibility of an SUV, the Toyota FT-SX made its debut in Detroit in 2005.

The niche-busting concept was given a simple but bold design treatment, and measured more than 15 feet in length and six feet in width. It also boasted all-wheel drive, 21-inch wheels and a ‘multi-function’ glass roof.

Although not intended for production, the FT-X gave a pointer toward Toyota’s future pick-up plans, with some styling touches that can be seen today in the likes of the US-market Tundra.

Packed with practical touches, the hybrid-powered FTX benefited from a double cab arrangement with wide-opening rear-hinged rear doors, removable rear seats, a loading ramp, and a multi-function unit concealed beneath the rear skid plate that houses an electric generator, air compressor and other system outlets.

If you’re looking back in the hydrogen-powered Mirai family tree, the FINE-S will feature somewhere. First shown in Detroit in 2003, the dynamic sports car featured with the promise of an early version of the Toyota fuel cell system.

The fuel cell system was located beneath the floor of the vehicle, creating a low centre of gravity to give excellent handling. Each of the four wheels could be powered independently.

At the time, the ccX was described as combining ‘the aggressive styling expected in a sports coupe with expansive cargo-hauling capability needed for light-duty work and play.’

Designed in Japan, the ccX was built in Italy at Forum Ricerche E Progetti. Most notable among its styling features is the roof – comprised of two large power sunroofs each made up of four glass panels. The roof panels tilt up individually, and then slide forwards and back towards the centre of the roofline, creating large openings over the entire passenger compartment and cargo area.