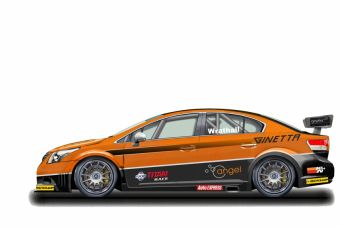 You’ve seen the NGTC Avensis undergoing wind tunnel testing, now we can reveal what engines the two teams fielding Avensis racers will be running under their bonnets.

The Dynojet Race Team’s Avensis BTCC car (artist’s impression pictured above) will be powered by a Toyota engine. To be raced this season by Frank Wrathall Jnr, the squad’s Avensis will use a 2.0-litre turbocharged power unit adapted from one of Toyota’s road-going range. The engine is currently under Toyota GB-funded development at the Northamptonshire laboratories of engineering consultancy X CTech R, whose technicians hope it will prove to be one of the lightest and most powerful engines on the grid of the Dunlop MSA British Touring Car Championship.

In addition to the turbocharger, the Toyota engine will feature a number of internal revisions which will boost power output from around 140 bhp in road specification to – it is hoped – 300-plus bhp.

X CTech R technical director Mark Faulkner said: “The Toyota 3ZR engine is a lightweight, compact package which we have optimised to ensure delivery of the required performance and durability. This is an exciting programme and will allow us to showcase our experience with turbocharged touring car engines. We are looking forward to working closely with Dynojet and Frank to get the very best out of the complete package.”

Dynojet Race Team chief Frank Wrathall Snr added: “The Avensis has been designed to the ‘Next Generation Touring Car’ rules, which means we could have opted for the stock TOCA engine, however we were enormously impressed by the plans put forward by X CTech R and felt that this was the right way for us to go, not least because it means our Avensis will be 100 per cent Toyota.”

Scott Brownlee, General Manager, Press & Public Affairs at Toyota (GB) PLC, said: “The decision to fund the development of a new Toyota BTCC engine is a direct response to requests we received from privateer teams and drivers wanting to race the NGTC Avensis. We are delighted to be supporting the Dynojet Racing Team in this way and hope very much that even though theirs is not a ‘works’ entry, it will help return the Toyota name to the forefront of the BTCC.”

Wrathall Jnr, 24 and from Garstang, Lancashire, believes the Toyota-powered Dynojet Race Team Avensis will more than live up to expectations: “All the elements are in place for it to be very competitive indeed and I’m excited to go behind the wheel for the first time and get a feel for the Avensis, which will be the first front-drive car I have raced.”

Frank cut his teeth in karting from the age of 12, collecting many awards including the Will Hoy Scholarship, named for the late former Toyota BTCC driver. Wrathall graduated to circuit racing in 2007, earning Rookie of the Year status in the Ginetta G20 Championship. After twice finishing as championship runner-up in Ginetta’s series for its G50 sports racer, Frank was crowned G50 Champion in 2010 thanks to five race wins, and also earned ‘Rising Star’ status with the British Racing Drivers Club.

Wrathall’s Toyota – which will be joined on the BTCC grid by an ‘NGTC’-engined Avensis run by Speedworks Motorsport for Tony Hughes – is being built by Buckingham-based track specialist GPR Motorsport.

The opening rounds of the Dunlop MSA British Touring Car Championship are scheduled for 3 April at Brands Hatch, Kent.