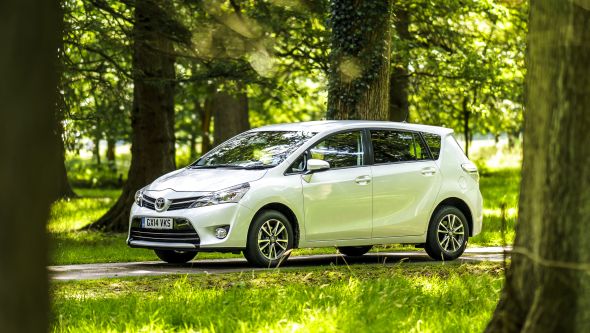 Family outings can be fraught affairs, especially during the school holidays. Which is perhaps why we have noticed a significant rise in the number of people searching our social media sites for more information on the Toyota Verso Icon, the mid-range specification variant.

In view of this we thought it was appropriate to reacquaint ourselves with this highly Verso-tile model, which was produced specifically for the demanding European market.

For many people, Toyota Verso Icon is the affordable sweet spot of the Verso range. Positioned as the second of four available trim levels, it marks the point at which seven seats, alloy wheels, cruise control, privacy glass, and dual-zone climate control comes as standard, and is the only grade where all engine and transmission options become available.

Icon is also the gateway to sought after optional extras such as the huge Skyview panoramic glass roof and multi-media Toyota Touch 2 with Go navigation system.

What immediately strikes you about Verso is the seeming conflict between its seven-seat practicality and the physical space it uses on the road. A masterful lesson in packaging, Verso is only marginally larger than a Toyota Auris hatchback but appears more imposing thanks to clever styling tricks that visually stretch the car’s width and length.

For instance, the upper grille runs the full distance between the headlights and includes a horizontal chrome strip that appears to pierce through the headlight surrounds. Then there is the strong character line that gently rises from the leading edge of the front bumper before dramatically sweeping upwards through the C-pillar to define the line of the roof-mounted rear spoiler.

More than just visually attractive, however, the Verso’s shape is designed to scythe through the air with minimal turbulence, leading to an impressive drag coefficient of Cd 0.29 (Auris is Cd 0.28) and a driving environment that is conducive to hearing conversation.

However, we wouldn’t blame parents for occasionally using the Toyota Verso Icon’s powerful six-speaker DAB sound system to drown out the hubbub of childish chatter, while keeping a close eye on their behaviour through the wide-angle mirror that drops down from the ceiling.

From a driver’s perspective, the design of the dashboard puts major controls like the gear lever within a short distance of the steering wheel – just like you find in the Toyota GT86.

The distance between the two front seats and three individually reclining and sliding seats in the middle row is the best-in-class. Which makes it all the more unusual that the second and third rows can be folded totally flat without needing to remove the headrests.

A total of 32 seating permutations can be generated by the Toyota Easy Flat seating system in Toyota Verso Icon, meaning that it is possible to accommodate up to seven people as well as luggage measuring up to 1,575mm long and 1,430mm wide. And for the times when it is not necessary to have all seven seats raised, the third row folds away to create a cavernous 440-litre boot space.

Engine and transmission choice is another highlight of the Toyota Verso Icon. Two Valvematic petrol engines and one D-4D diesel unit are available, all benefiting from Toyota Optimal Drive technologies for the best balance of performance and efficiency.

The range begins with an economical 1.6-litre 130bhp petrol engine mated to a six-speed manual gearbox (seen in these images), growing into a 1.8-litre 145bhp powerplant that is only paired with Toyota’s Multidrive S continuously variable transmission. The other alternative is a punchy 1.6-litre diesel offering 110bhp, 199 lb/ft torque and 62.8mpg combined fuel efficiency. It, too, comes with a six-speed gearbox and brings stop/start technology for the first time to the Verso range.

UPDATE: Toyota UK no longer offers the Toyota Verso Icon in its new car product range. However, it continues to be a sought-after model on the used car market. To search for approved used examples, check out our used car portal by clicking here.