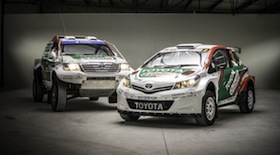 Toyota Motorsport South Africa has announced a strong line-up of drivers for its Hilux and Yaris models for the 2014 cross country and S2000 rally season.

The very Toyota Hilux that Giniel de Villiers and Dirk von Zitzewitz took to a fourth-place finish at this year’s Dakar Rally will be driven by reigning cross country champions Anthony Taylor and Dennis Murphy. Toyota will be chasing its eighth manufacturers’ championship and seventh in succession in the series.

Taylor and Murphy will be backed up by the Hilux of Leeroy Poulter and Rob Howie, who finished in 33rd position in their first Dakar earlier this year.

Poulter will also be racing in the Castrol Team Toyota Yaris in the S2000 class, alongside Elvéne Coetzee, while two-time former national champion Hergen Fekken makes his Toyota debut in the second Yaris. Carolyn Swan, who read the notes for now-retired Johnny Gemmell in 2013, returns to complete the new pairing. Toyota will be chasing its 12th drivers’/co-drivers’ championship and 22nd manufacturers’ championship in S2000.

Toyota Motorsport will again prepare and enter a third Yaris, in Imperial colours, for Giniel de Villiers and Greg Godrich. In their first season together, they finished fourth overall and third in S2000 in 2013.

Watch our video of Giniel de Villiers tackling the rally course at the Goodwood Festival of Speed below.