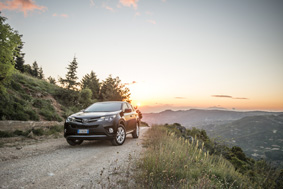 Launched as compact three-door model, this first urban SUV was very different to the traditional small 4x4s available at the time – and it wasted no time winning fans.

Initially, Toyota had expected to sell around 4,500 RAV4s a month. But when 8,000 orders were received in the first few weeks after its big reveal, Toyota knew it had a winning formula and doubled production volume.

Since those early days, more than 5.2 million RAV4s have found homes worldwide – a staggering 1.3 million of those here in Europe. And you won’t have to look to hard to find the evidence of their toughness. More than 90% of those early cars are still on the road.

So, 20 years down the road from launch, we are in Greece to celebrate the RAV4’s birthday with a three-day tour to show off the talents of the latest generation model.

The drive promises to be exciting but tough – with a mix of on- and off-road driving, from the clogged streets of Athens, over high mountain passes and on to some of the roughest rally stages on the international calendar.

Here’s how the action unfolded:

Day 1
After a short drive south from Athens airport we get stuck into to what will be the theme for the next few days – in a convoy of latest generation RAV4s we turn off the main highway onto a gravel road and into the heart of Greece’s stunning countryside.

The 12 mile drive on gravel roads proves no trouble for the RAV4 and although we’re on dusty, rocky roads, and the temperature is climbing towards 30 degrees C, we reach our destination without breaking sweat.

And the destination is a corker – The Temple of Poseidon at Sounion. The building sits almost alone, atop a rocky cliff that plunges 65m down to the sea. Built 2500 years ago it’s a spectacular location.

We then take the coastal road highway back up to Athens. It’s a bizarre feeling to be negotiating twisting gravel routes and then Athenian rush-hour traffic in the space of a couple of hours but the RAV4 feels every inch as at home on the loose stuff as it does in heavy traffic.

The Electronic Power Steering is improved in this latest model and proves just as good at helping the car switch lanes as it is at dodging boulders.

Day 2
It’s an early start , but you need to be quick to escape Athens before the morning traffic turns really nasty.

This morning’s route is a real treat as we’re heading west to the Peloponnese Peninsula. After about 60 miles of highway driving we head off-road into the mountainous interior, driving through fragrant olive groves, up steep, mountain passes, vineyards and most exciting of all and 12 mile stretch of gravel that goes from the Peloponnesian village of Klenia to the ruins of Mycenae, one of the major centres of Greek civilisation 4000 years ago.

This is a stage on the Acropolis Rally, one of the toughest events on the international calendar. It has reputation of being a car breaker, as the football-sized boulders that litter the roads are just as likely to rip a wheel off as cause a puncture. It’s hot, it’s dusty and in the RAV4 it’s great, great fun. The stage starts off twisting through an olive grove before blasting up the mountain, through a series of switchbacks. The end of the stage passes the citadel of Mycenae, with its famous Lion Gate. History, culture and rally fever on 12 miles of dirt roads. Awesome!

We move onto a wine growing region but the roads are still as rough. Out of the rally stage we rarely get the RAV4 above 2nd gear, but the scenery in this part of Greece is stunning and it’s certainly no chore picking our way through the landscape slowly.

Our destination at the end of day 2 is the village of Trikala. It’s 1000m above sea level but the route we are taking actually means we descend down into the village. Before that, however, we have the second of the day’s WRC stage to tackle – a fast, undulating blast through pine forests.

This is amazing fun. To think, many RAV4s are routinely used to take the kids to school or carry the weekly shop, yet here we are, tearing along a rally stage. This is in a standard RAV4; they haven’t been modified in any way in order to handle this rough treatment. The intelligent four-wheel drive delivers grip to the all four wheels when the system detects it is required. You can’t feel it – it just happens.

I’ve been a massive rally fan years – Carlos Sainz won in Greece in a Toyota while on his way to the World Rally Championship title – so this has been an amazing experience.

Our stop for the night features all four generations of RAV4. Seeing them side by side, it’s a little like the evolution of man image where each generation is bigger and has a stronger, more purposeful stance than the predecessor.

The original RAV4 was a three-door, petrol powered SUV alternative to a hot hatch, but with each generation, the car has grown and evolved to match changing needs of customers. So we now have the latest generation that is ideal for families wanting a stylish yet fashionable alternative to MPVs or estate cars. The day on these Greek WRC stages proves the latest RAV4 has lost none of the fun factor that inspired those first customers 20 years ago.

Day 3
For our final morning once more we’re traversing mountain tracks. Switch off the engine and the only sound you can hear this high up is the clinking of the goats’ bells. It’s a stunning place. Given the silence and solitude, you can understand why Greek monks built monasteries hewn into the cliff walls here (if not quite understand how). The route takes us down to the coast and then back to Athens.

It’s been an amazing tour, through stunning scenery, past ancient monuments in a comfortable, reliable and capable car. And an economical too – I’ve covered more than 350 miles on a single tank of diesel.

My RAV4 has stood up well to the test and given the history of the car so far. You’d need to be a brave (or foolish!) person to bet against the fact that it will still going strong in another 20 years…