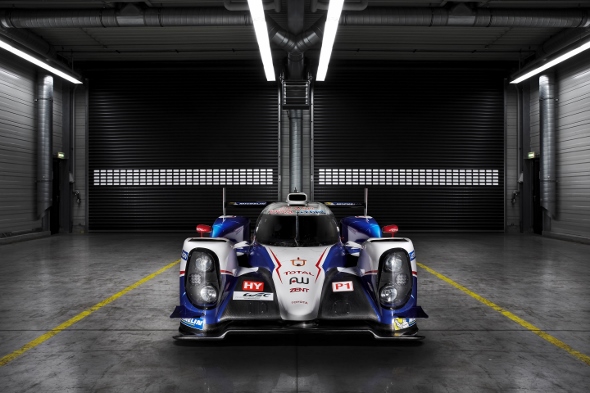 Here it is, Toyota Racing’s new TS040 Hybrid racer, the car that will take the team into the 2014 FIA World Endurance Championship.

Unveiled today at the world-famous Paul Ricard circuit in the South of France, the TS040 uses the most advanced hybrid technology in modern racing. It begins an official championship test session tomorrow, before making its competition debut at the season-opening Six Hours of Silverstone race on 20 April.

Under the skin is a  3.7-litre V8 petrol engine, that takes maximum power to 1,000PS (986bhp/736kW), and has been developed in line with revised WEC technical regulations, which put an emphasis on fuel economy. For the 2014 season, teams are required to use 25 per cent less fuel than in 2013, with savings achieved through changes to powertrains, aerodynamics and driving style.

The V8 engine in the TS040 Hybrid has been engineered at the Higashfuji technical centre, while the chassis has once again been designed, developed and manufactured by Toyota Motorsport (TMG) in Cologne, Germany.

TMG spent time optimising the airflow around the car using wind tunnels to reduce the car’s drag coefficient and improve fuel economy. The purpose of optimising airflow was also to increase downforce and grip, to make up for the use of thinner tyres.

The TS040 Hybrid has already completed 12 days of testing across Europe since January and it will undergo a further test following this week’s prologue event ahead of its first race.