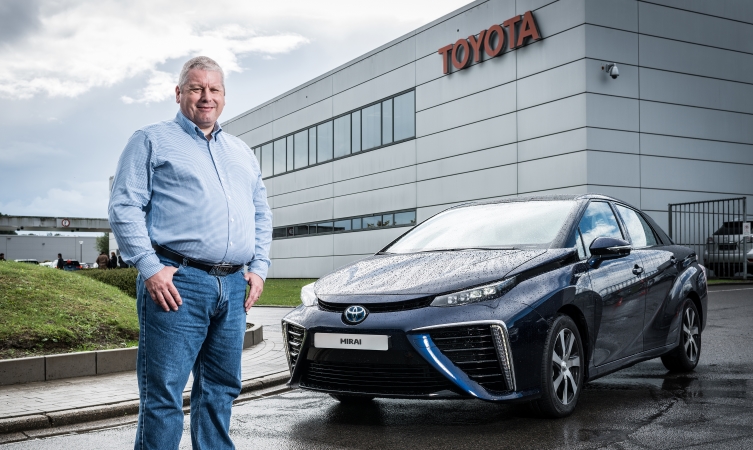 After experiencing all aspects of the Mirai on their continental adventure, we caught up with each of the lucky participants to get their first impressions of the future of motoring. Here we get the first impressions of Paul Groom, who joined us for the #HybridRoadTrip:

Toyota Blog: How did you end up driving the Mirai?
Paul Groom: My son Lee and I were invited by Toyota GB to visit their establishment in Brussels to see the soon-to-be-released Mirai hydrogen fuel cell car and the technology behind it.

TB: Why did you want to drive the Mirai?
PG: Prior to driving the Mirai I had no real experience of driving anything that is a true alternative to a petrol/diesel car, so this was a chance not to be missed. The Mirai’s petrol car-like range and quick refuelling could be a viable alternative for those that require more than just local transportation.

TB: What did you like about the exterior design?
PG: I liked the clean and modern lines, but felt that the blue example we drove hide the lines somewhat – lighter colours may suit it better. There is a clear family resemblance to the new Prius which will build brand image but may be an issue at the Mirai’s likely price point.

TB: What about the interior design?
PG: The interior design of the Mirai is very appealing, modern without being overboard futuristic just to reinforce its advanced technological platform. The materials used were high quality and there was a very upmarket feel to it.

TB: What were your impressions of Mirai’s build quality?
PG: Bulletproof! Almost literally, considering the information we were given about the hydrogen fuel tank testing. Although only in the Mirai for a short time the overriding impression was of a quality product.

TB: What was the first thing you felt when you sat behind the wheel?
PG: My first impression was ‘this is a really nice place to be.’

TB: How did the Mirai feel when you first accelerated from a standstill?
PG: Interestingly, my first move from standstill was in reverse but all went well! Despite the advanced hydrogen technology, everything was normal, but quieter. Power take up was very smooth with a firm response to the accelerator.

TB: How did it feel through the corners?
PG: The steering was direct and positive. Despite the very wet track there was a reassuring level of grip. The car is fairly heavy, but responded well.

TB: And how was it under braking?
PG: The brakes felt normal, and I mean that as a compliment. No sense of the regenerative braking affecting the feel from the brakes.

TB: What impressed you most about the Mirai?
PG: The quality of the Mirai was superb, but beyond that what impressed me was that there was no compromise to be made over driving a conventional car.

Driving the Mirai has not changed my opinion but rather reinforced it. Here is a technology that…could truly replace my diesel car.

TB: And what surprised you most?
PG: Just how normal everything was!

TB: Did Mirai change your opinion about the future of fuel cell cars?
PG: Driving the Mirai has not changed my opinion but rather reinforced it. Here is a technology that, once the hydrogen replenishment infrastructure is in place, could truly replace my diesel car.

TB: What are your expectations of the popularity of fuel cell cars?
PG: I expect fuel cell cars to be a great success. My only concerns are how quickly the hydrogen replenishment infrastructure can be put in place, and whether the cost can be brought nearer to that of ‘fossil cars’.

TB: Is there anything else you’d like to share?
PG: Having driven the Mirai, admittedly only for a short while, it left me a little disappointed with the Auris Hybrid that we then drove to Frankfurt. The Auris is a good car, but the fuel cell technology has to be a better way forward. Thanks again to the @ToyotaGB team for giving us the opportunity to try the Mirai, and for the great time Lee and I had on this road trip.