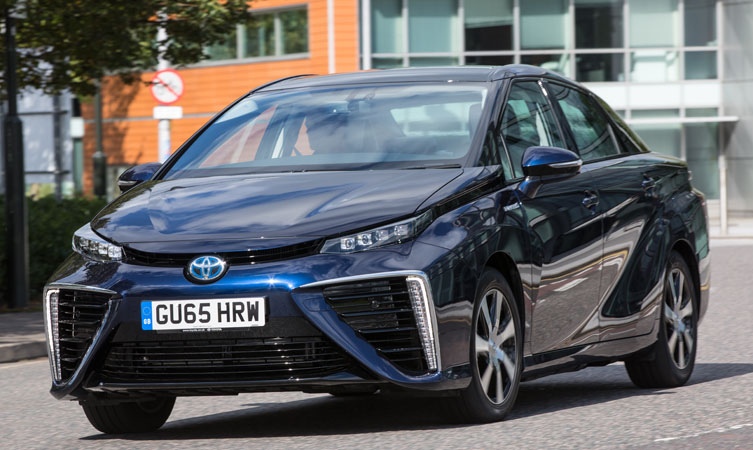 The Toyota Mirai is the world’s first mass-production fuel cell saloon. That means it is fuelled with hydrogen only, there is no combustion engine, and the only tailpipe emission is water vapour.

We’ve compiled the most popular questions you’ve been asking about the car into one Mirai FAQ. If you have a question that isn’t in this post, simply use the comments form below and we’ll answer it.

Where can you fill up the Toyota Mirai?

You can find hydrogen refuelling stations in the UK that have the capacity to fill up the Mirai at:

There are more stations coming online in the near future around the country.

We’ll keep you updated as and when more hydrogen refuelling stations come online.

What is the range of the Toyota Mirai?

The Toyota Mirai has a cruising range of around 340 miles. Instead of litres or gallons, the Mirai’s official fuel economy is stated in kilograms, because hydrogen is a gas, not a liquid. The amount of hydrogen in a certain volume will depend on pressure and temperature, so the best metric to use is the weight in kg. So the combined fuel consumption figure is 0.76kg per 100km.

How much does it cost to fill up?

Customers who lease the car will receive free fuel as part of their contract with Toyota.

For customers who buy a Mirai outright, it costs roughly £50 to fill up. Hydrogen is sold by the kilo and a kilo costs roughly £10. The Mirai tanks hold 5kg of fuel. Unlike charging an electric car, it takes between just three and five minutes to refuel.

Is it safe to store hydrogen in a car?

Hydrogen is as safe as any other fuel used in a car. It has been used as an energy carrier for decades, and there is a vast amount of know-how and experience within Toyota and elsewhere to handle it safely.

Over the past ten years hundreds of Toyota fuel cell vehicles have been thoroughly road tested. They have racked up millions of miles over all kinds of demanding terrain, from the freezing cold of northern Finland to the baking heat of southern Spain.

Where is the hydrogen stored in a Mirai?

The hydrogen is stored in two compact, ultra-tough tanks. Toyota has been working on their design in-house since 2000 and is more than satisfied with their strength and safety performance.

Are the hydrogen fuel tanks in a Toyota Mirai strong and safe enough?

The Mirai is as safe as any other Toyota. Its hydrogen fuel tanks are designed to withstand up to 225% of their operating pressure, which is a very high safety margin. They’ve even been shot at with high-velocity weapons.

The tanks’ main source of strength is their carbon fibre shell, over which there is a further layer of glass fibre. Should the car be involved in an accident, any damage to the hydrogen tank will be clearly visible on the glass fibre layer; tests can then be carried out to find out whether the carbon shell itself has been compromised. The whole tank is lined with plastic to seal in the hydrogen.

In the unlikely event of a leak, Mirai is fitted with highly sensitive sensors that can detect tiny amounts of hydrogen. These are placed in strategic locations for instant detection. Should a leak occur in the fuel system, the sensors will immediately shut down the safety valves and the vehicle itself.

As a third layer of safety, the cabin is strictly separated from the hydrogen compartment to prevent the ingress of any leaking hydrogen, which would instead gradually disperse into the atmosphere.

Is the process of getting hydrogen environmentally friendly?

The hydrogen that powers the Mirai can be obtained from a wide range of natural resources and man-made by-products, even sewage sludge. It can also be created from water, using natural, renewable energy sources such as solar and wind power.

The environmental impact of using hydrogen therefore depends on the carbon footprint of its production path.

Hydrogen is already used extensively in the chemical industry, which is familiar with its large-scale production, handling and distribution.

Can I drink the water that comes out of the Mirai?

The water is not intended for drinking because it can collect dirt and other impurities as it passes through the system: you wouldn’t drink a glass of water that had been standing outside exposed to the elements, after all. That said, the water that is produced by the system is pure H2O.

What does Mirai mean?

Mirai is the Japanese word for Future.

Where can I buy a Toyota Mirai?

The Toyota Mirai is sold directly by Toyota GB. You can sign up to show your interest on the Toyota website.