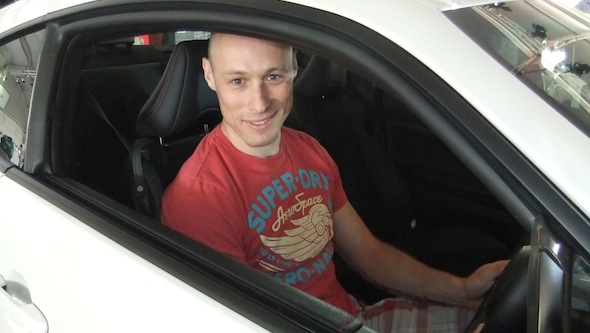 Taking the multi-award winning Toyota GT86 for a spin up the famous Goodwood hill climb course is a rare and special experience – but that’s exactly what 100 lucky competition winners have done today.

We spoke to them after their time behind the wheel to find out what they thought of the car and the drive. Here’s what they had to say…

“I’m such a big fan of the old AE86 Corolla, so I was really keen to test-drive the GT86. I thought it would probably be the spiritual successor of that car but I was surprised to discover that it’s so much more than that. I absolutely loved it, and though I didn’t get to give the car a real going-over you can immediately tell how good it is. It feels so natural to drive. I couldn’t fault it. In fact, I’m now seriously tempted to buy one.” Chris Ellis, Milton Keynes

“Having experienced the GT86 launch at the Moving Motor Show last year, I wanted to come back and drive it this year’s show because I’ve owned my current car for the past nine years and think it’s time to make a change. After my drive of the car I can really tell how far technology and responsiveness has improved in those nine years. The GT86 holds the road really well and the short, precise shift of the gearbox is very rewarding and feels properly mechanical.” Mike Gibbons, Dorset

“It’s responsive, holds the road well and it feels great. I would like to get out there and drive the course again. For me, the GT86 is not necessarily an everyday car – I actually have an Auris – but I’d love to have one. I like the fact that it still has a really good warranty.” Gary Banks, Newport, S. Wales

“It’s a special car for me, I’ve come from Belgium to visit Goodwood and luckily I’m getting the chance to drive the GT86 here as well. I’ve already driven it at home, and using a right-hand drive car was a bit of a challenge but it’s so much fun. I’d like to try the CSV3 version on a track but 200 horsepower is plenty for a road car.” Claeys Maurice, Brussels

“It really feels like you’re a part of the car; in it rather than on it. I like the GT86 because it’s responsive and distinctive, and there’s not a lot else like it on the market. I would personally like a little more performance from the car but I think it’s perfectly pitched at those that want to have driving fun.” Camden Reeve, Middlesex.

“I’ve got a Yaris for everyday driving and a Hilux for business, so I was intrigued to try a Toyota sportscar, and especially this TRD version. Once it’s wound up a bit it goes really well, and though the steering was heavier than I expected it does make you feel like you’re part of the car and actually doing something.” Shaun Matthews, Somerset

“I think the GT86 is a really nice-looking car, and having now driven it I think it’s a really well sorted one, too. The responsiveness was fantastic and it felt very solid going up the Hill. This is the first time I have driven a rear-wheel drive car but I felt very at ease with it.” Mick Healy, Leicestershire

“I was surprised at how quick [the GT86 CS-V3] was. Well, it’s going to be, isn’t it – it’s a race car! It was great fun to drive it up the Hill Climb, especially when my everyday car is a boring 1.6-litre diesel. This drive was an amazing experience… What a great day!” Peter Hardy, Kent

Read out other GT86 posts here, or find out more about the car at toyota.co.uk.