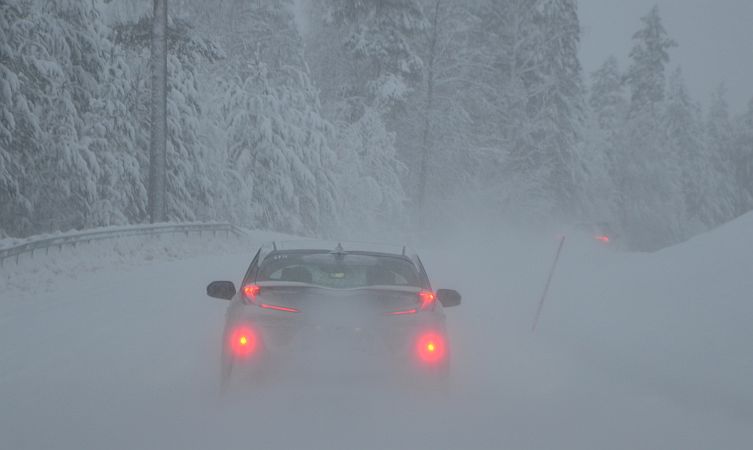 The pioneering Five Continents Drive team reached the midpoint of their winter journey last week, setting the scene for a ferry crossing over the Gulf of Finland and adventure in the heartland of Scandinavia.

Following a soothing two days exploring the medieval town of Riga, the team felt fully charged for the start of the third week. New adventurers were welcomed from far and wide, and our mission for the day was briefed by new vice captain Bart Morren. 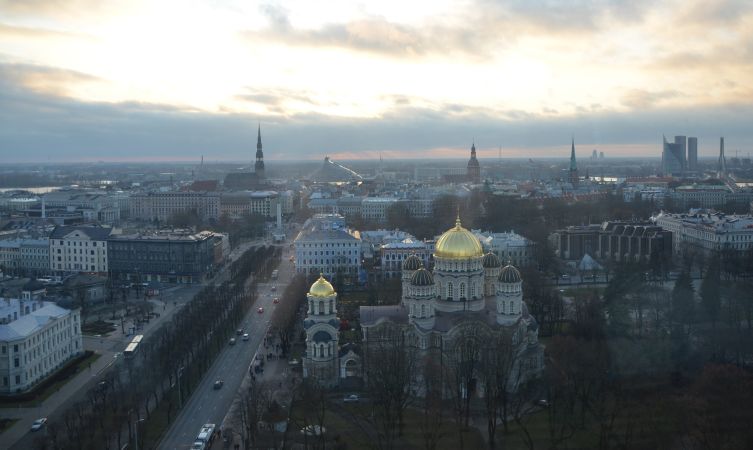 Remembering the mantra that ‘If you fail to prepare, you prepare to fail,’ a thorough safety check ensured the cars were ready to head out into the cold. Even the ground underneath the cars was examined for any suspicious spillages that might point to oil or fluid leaks. But with a group thumbs-up, the Yaris Hybrid set off to lead the convoy. 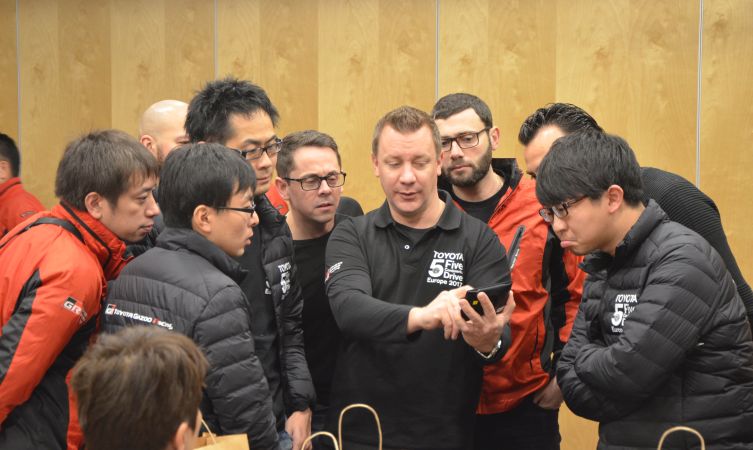 Taking the Via Baltica north out of Riga, the westerly treeline occasionally thinned to offer brief, shimmering glimpses of the beautiful Baltic sea. After a brief stop in the border village of Salacgrīva, we crossed over into Estonia. Here the road conditions improved noticeably, bringing smoother surfaces and a new speed limit of 90kph (56mph). It was a regulation the drivers of heavy goods vehicles had obviously not received the memo about as they continued to maintain their previous speeds and overtake into the direct path of oncoming vehicles. 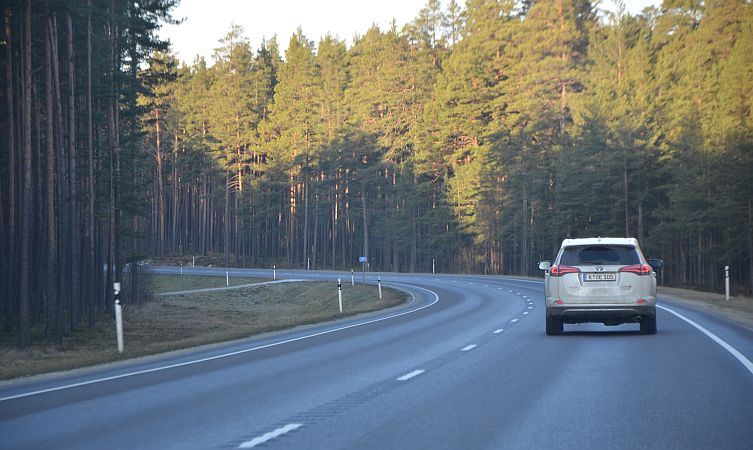 A wrong turn (yes, it does happen) gave the team an unplanned opportunity to test their studded winter tyres on an icy side road towards our destination in Tallinn. At the evening briefing we were reminded that this was but a small taster of the freezing conditions expected tomorrow in Finland. But in order to get there we needed to catch a ferry, and as the weather was not expected to be pleasant we were warned not to eat too much for breakfast…

Despite overnight winds threatening to blow our plans off-course, the morning ferry remained on schedule. So after a short drive through the city to the port, we boarded the boat. What followed was a choppy, two-hour voyage that left many in the group feeling nauseous and unbalanced. Their relief in reaching land again was noticeable. 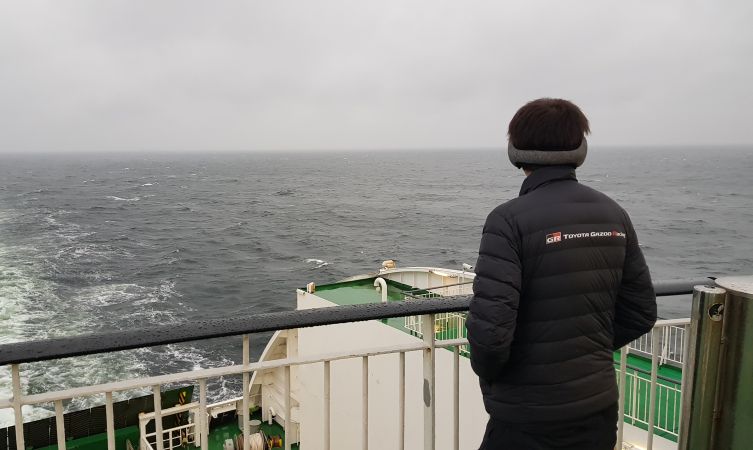 After disembarking, the convoy headed into the heart of Helsinki and deep into a blinding snow shower – our first taste of what we had come to Scandinavia for. Now partially sighted and contending with traffic signals, progress was slow as we used radios to maintain communication when separated from one another. 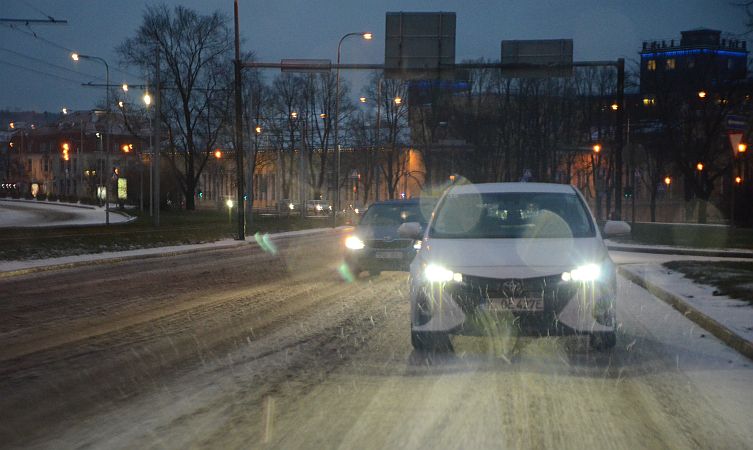 Eventually joining the E12, we discovered that the highway was blanketed in a white top-coat. The only indication of where the underlying lanes used to be were the tyre tread marks left behind by those who had already passed through. But these lines often proved to be false friends, meandering across the road with no sense of lane discipline. Without being able to use the Toyota Safety Sense features of Lane Keep Assist or Road Sign Assist, our pace slowed well below the regular highway limit. 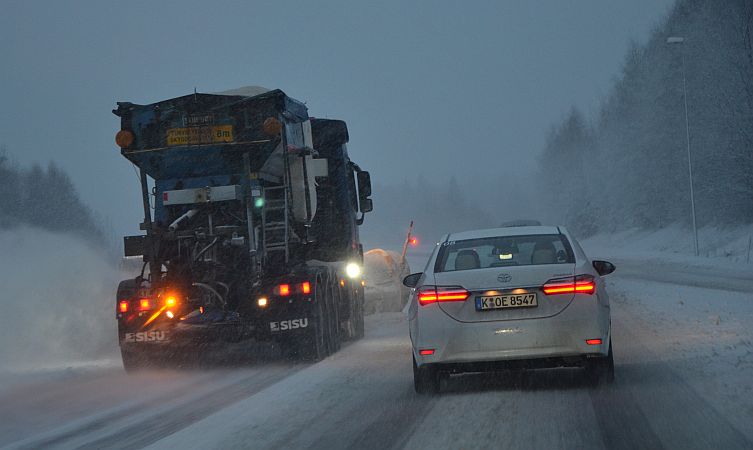 At our briefing in the hotel in Tampere, the snow-affected safety systems were discussed in detail. Fortunately, among the group was Hideo Osanai, a technical manager from Toyota Motor Corporation in Japan, who understood the importance of what had been experienced today. He went on to reveal some confidential plans already in motion to improve Toyota Safety Sense.

With the need to reach the port of Vassa by midday, today called for another early rise. Setting off in darkness, the passing of numerous cars the previous had compacted the frozen surface, leading to treacherously slippery conditions on the hilly route out of Tampere. 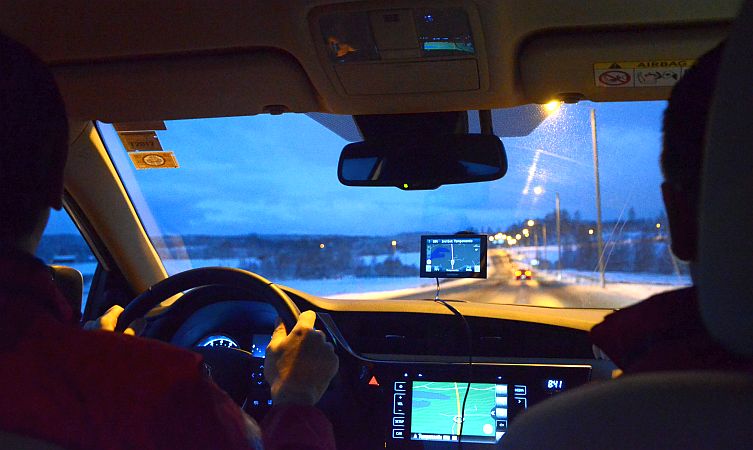 Emerging unscathed, we were treated to relatively clear highways, occasional slush, and a magnificent sunrise that gradually revealed the beauty of the Finnish countryside. While driving, the filthy cocktail of snow, dirt and gritting salt made airborne by tyre spray meant that the windscreen washers were in constant use. Which got us wondering how much fluid was left in the reservoir, and how nice it would be to have an indicator that warned you when the water supply was running low. Note to the team there… 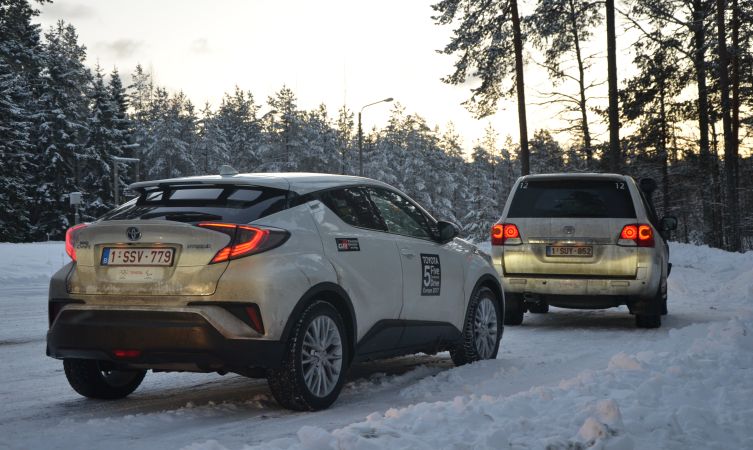 To the relief of the team, the sea conditions to Umeå were calm, so we took advantage of the four-hour crossing by bringing forward our daily team debriefing. During the meeting we were given a native insight by Christian Hallin, a brand manager from Toyota Sweden. He told us that Sweden is the home of two extremes: sweltering summers and bone-chilling winters. Interestingly, 38% of all vehicles sold are all-wheel drive, as they offer practicality and vital accessibility throughout the seasons. The RAV4 is therefore a popular choice, but the discussion also prompted the identifying of some vital learning points for future product development. 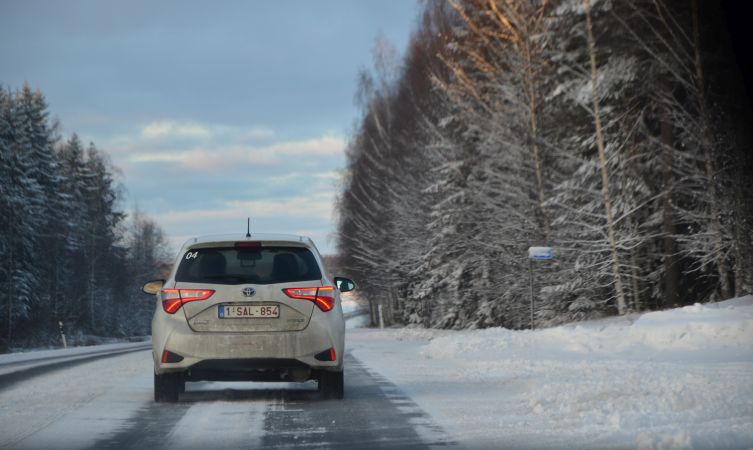 Before leaving the boat, a regular check of the Proace revealed that the oil level had dropped. So a call was made to request an investigation at the nearby Burlin Motor AB dealership in Umeå. Despite the workshop being full, Toyota’s one-team mentality shone through clearly as the technicians were unhesitant in offering their full assistance.

Having pulled the Andon cord yesterday due to an undetermined issue with the Proace, the team was delighted to hear from Burlin Motor that the oil leak had been traced to nothing more serious than a loose gasket on the sump plug. So with a new component fitted and a fresh oil change the van was ready to rejoin the convoy. 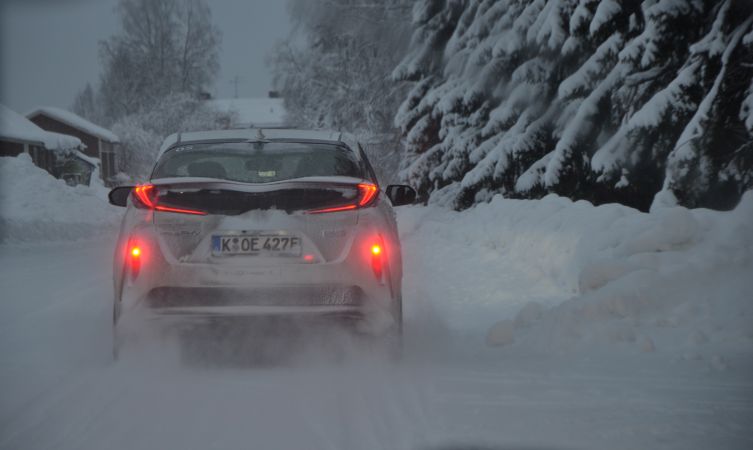 Today’s challenge was to venture deep into the Swedish countryside. Our briefing stressed the importance of focusing on the road, keeping a safe distance from one another, and to keep an eye out for roaming reindeer – a danger also indicated by red poles with black flags on the roadside.

Departing into a light snowfall, we took the R92 out of Umeå and experienced what is known as a whiteout – a situation when visibility becomes severely impaired by plumes of snow blinding forward vision. Under such circumstances we had been reminded not to panic, and that the fog usually clears in a few seconds. Nevertheless, by reducing our speed and anticipating the shape of the road ahead the majority of us had been able to pass through unscathed. Not so fortunate was the Proace and one of its competitor vehicles, both of which had been pulled into the roadside reservation after placing their nearside wheels on fresh snow. Fortunately, it was such a low-speed incident that nobody was hurt and no damage had been done to the vehicles, but it was not possible to extricate them from the ditch without help. A rescue team was therefore scrambled and the Land Cruiser deployed to pull them out – a recovery that ended up taking five hours. Though hidden by darkness, a thick blanket of snow and swirly, shape-disguising camouflage, we awoke to see a number of prototype vehicles in the hotel car park. We assumed that they, too, would be descending on the Bosch Winter Test Centre in nearby Vaitoudden. 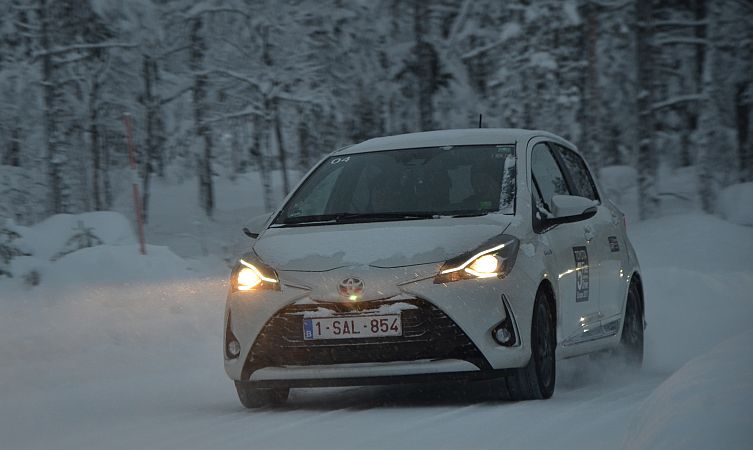 During the past 40 years, this centre has been instrumental in the development of safety innovations such as anti-lock braking and stability control systems. Toyota started using the facility in the winter of 1980 to examine these emerging technologies and has been collaborating with Bosch ever since. 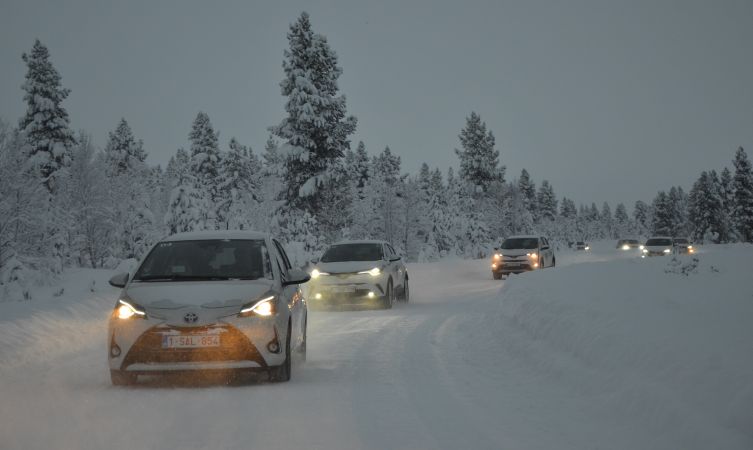 So it was fascinating for the Five Continents Drive team to be given a personal tour of this high-security operation, experiencing for themselves how severe natural conditions combine with technology and more than a dozen winter tracks to test the stability, reliability and responses of Toyota vehicles in real-life situations. Having gained priceless insight into the work that goes on here, we bid farewell with renewed confidence that our collaboration with Bosch is helping us create the future of mobility.