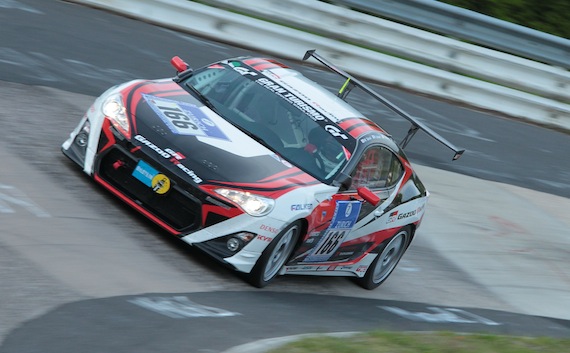 Toyota is celebrating success after class wins for the new GT86 sportscar in a race many consider to be the toughest in the world.

The new Toyota GT86 made its endurance racing debut at the 2012 ADAC 24 Hours Nürburgring across two classes for road going cars.

The GAZOO Racing prepared Toyota GT86 took the win in the SP3 class, completing 129 laps. In the overall standings, the car finished in 46th place overall.

Production of the GT86 for Europe started in April this year, and success in the car’s first 24-hour races bodes well for the future racing activity of small teams and individuals alike.

The next chance GT86 fans will have to see the Gazoo Racing car in action will be at the Goodwood Festival of Speed on June 29th.

After surviving a few minor incidents, and posting a quickest lap time of 8:44.636, the GAZOO Racing Lexus LFA ran reliably and consistently throughout the race, and 15th place in the overall standings.