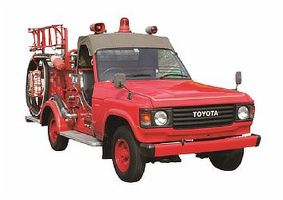 The Toyota Automobile Museum will hold a rare vehicle exhibition from July 19 to September 28 featuring special-purpose vehicles used in emergency and industrial roles to help celebrate the museum’s 25th birthday.

Special workbooks in Japanese and English have been prepared for attending children to present the roles and functions of the six exhibited vehicles and their users in a fun way. Demonstrations of the vehicles will also be held seven times between July 19 and September 13.

In keeping with the museum’s 25th anniversary slogan, ‘Becoming a museum that tells stories’, there will also be two special talks on heavy machinery.

There will also be a bus tour to see towing tractors working on-site at Chubu International Airport.

Vehicles on show include