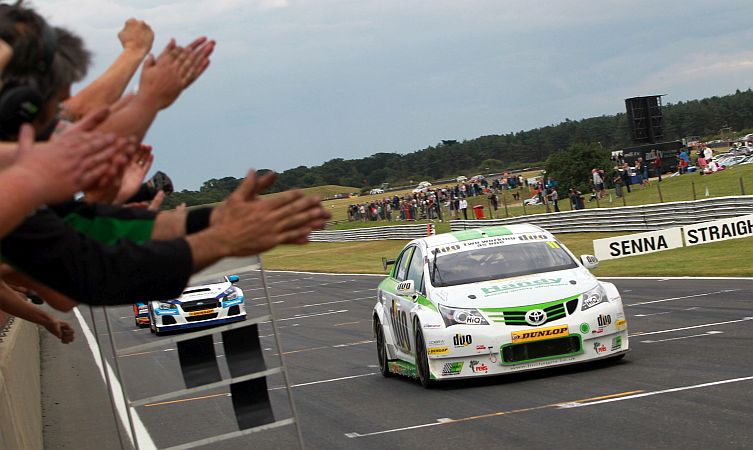 The sixth weekend of BTCC action at Snetterton – the longest circuit in the calendar and one that traditionally favours front-wheel drive cars – provided a dramatic return to form after the mid-season recess. The championship remains as unpredictable as ever, with ten different drivers topping the podium and six different manufacturers represented within the winners’ circle so far.

Fast-charging Avensis driver Tom Ingram had proved quickest during Dunlop’s summer testing event at Snetterton, so was hoping to consolidate that position during official Free Practice. During the first session, however, the one-lap specialist was almost a second behind the lead car, resulting in eighth position. 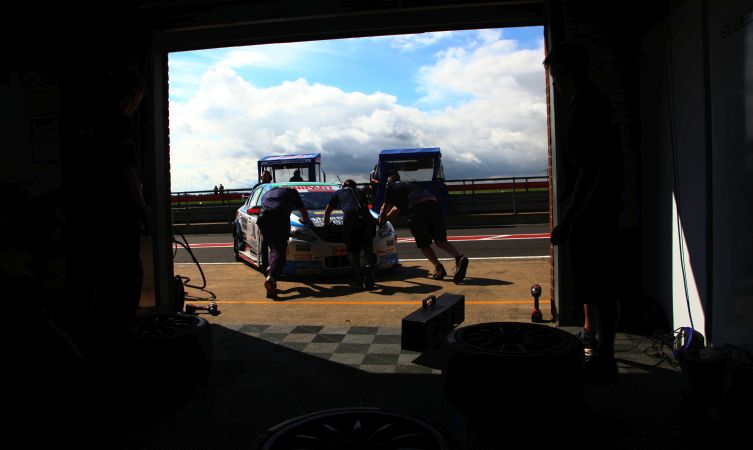 Improvements came in the second session, with the Speedworks Motorsport driver clinching the fourth fastest lap by the time the chequered flag fell. Fellow Toyota driver Rob Austin set the next fastest time for the Avensis in 14th position.

Snetterton was also the first event for returning driver Michael Caine (no, not that one), who was welcomed by Team Hard in the sixth Avensis in the championship. 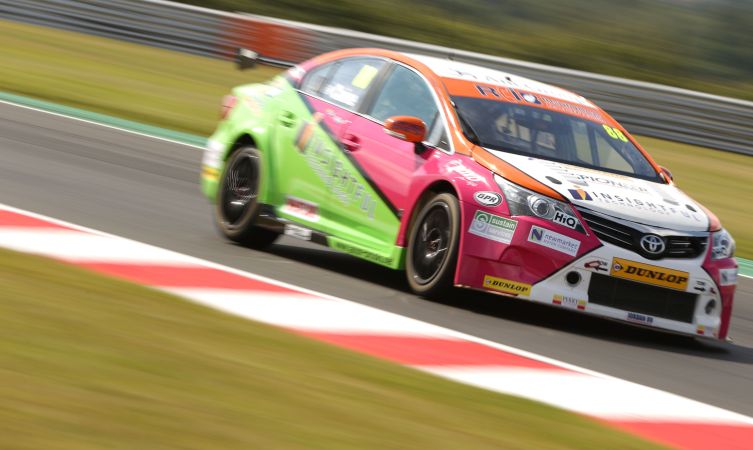 Considering the length of the Snetterton circuit, it was incredible that a little over half a second eventually separated the top ten finishers. The tussle among the top three was especially tough, with only a couple of hundredths of a second between them.

Speedworks driver Tom Ingram remained in fourth for much of the race, poised to capitalise on any mistakes, although he had tussles of his own to manage in fending off Mat Jackson and an impressive performance from Hunter Abbott. 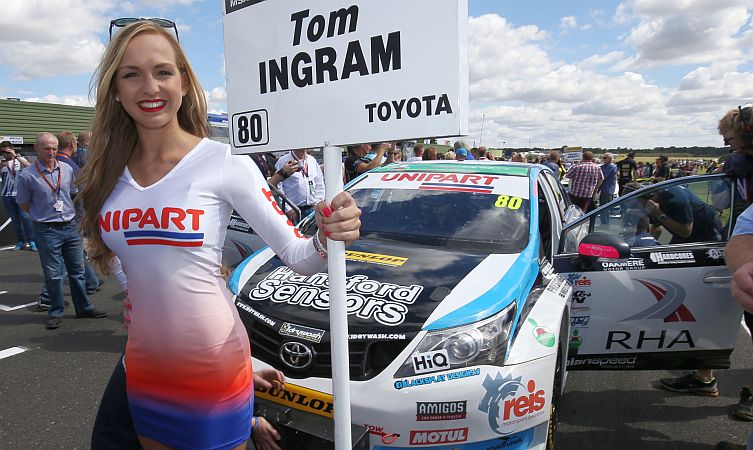 Following the race, Ingram commented: “We’re really happy with P4. We are ahead of the guys we’re competing against in the championship, and those in front of us are all carrying less ballast.

“We’re already in a strong position going into tomorrow and we’re going to try and hold station. Maybe we can pick up a podium… we should be in good shape. It’s going to be the same for us as every weekend – aiming for points, so we’ll take what we can get.” 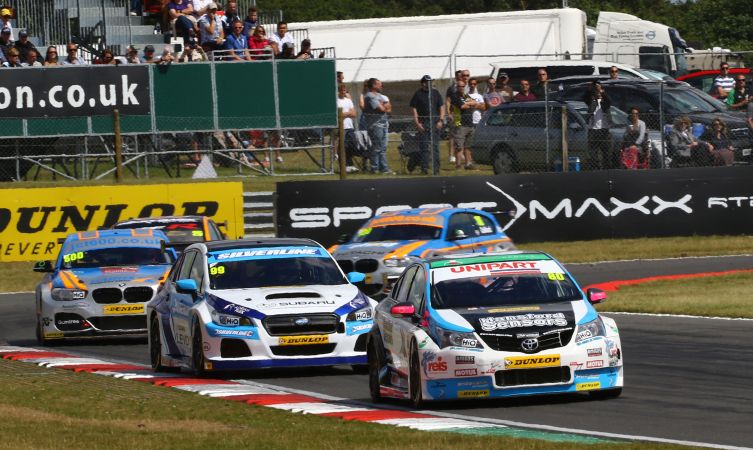 Having started race one down in 23rd position after suspension problems in qualifying, Handy Motorsport’s Rob Austin produced an impressive drive to climb through the pack and finish in 13th place. No places could be gained off the start line, so the Avensis driver had to gradually wear down his competitors during the course of the race. 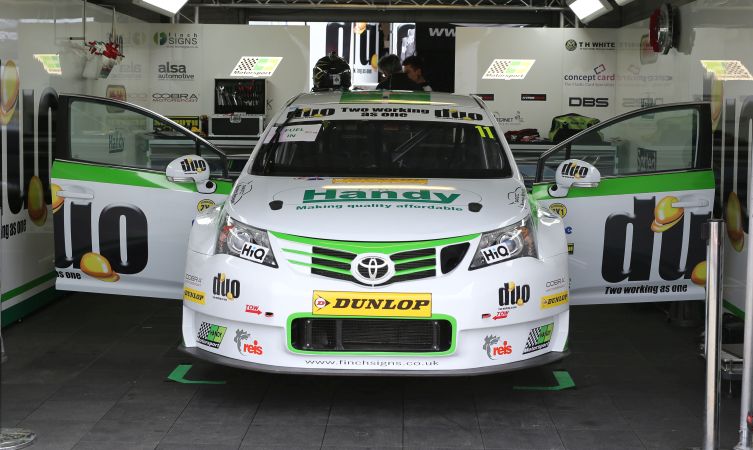 By lap three the Handy driver was in the top 15 and three seconds away from the next group of cars; which also gave him free space to concentrate on carving an efficient route around the circuit. Interestingly, Rob’s best lap during the race was just 0.1 seconds behind that of Gordon Shedden’s fastest in second place.

Further up the pack, Tom Ingram sank from fourth during fierce bumper-to-bumper squabbles. One particular tussle immediately ahead resulted in a puncture for Ashley Sutton, and the millisecond of confusion surrounding the incident allowed Jason Plato to leapfrog Ingram, forcing his Avensis into sixth place.

The weekend’s second race was red flagged on the opening lap after several collisions, which was unfortunate for Rob Austin as from the start line he had already been able to make up several places before the halt was called. 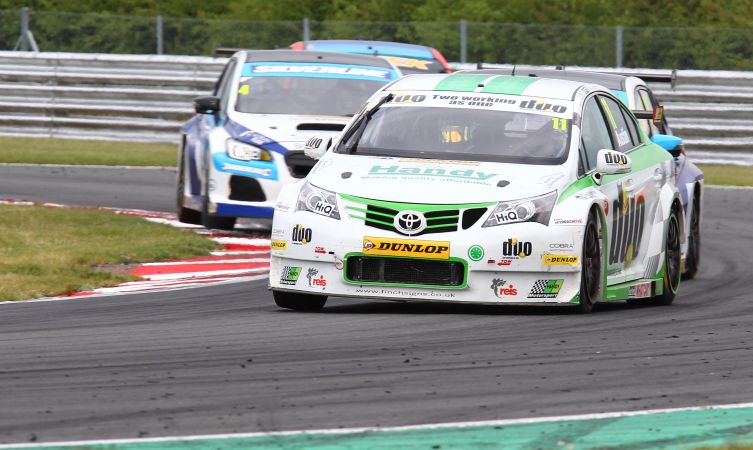 The restarted race ran over a reduced distance of ten laps, halfway through which Austin battled into the top ten and managed to maintain a strong ninth place despite pressure from reigning BTCC champ Shedden during the closing stages. Meanwhile, Ingram finished the race in seventh position.

Another red flag incident on race three set further shockwaves through the championship, this time after a four-way contact sent Hunter Abbott into a dramatic barrel roll that pirouetted his car over the barrier and into a television gantry. Though a cameraman and several drivers were shaken by the accident, all were thankfully unharmed. 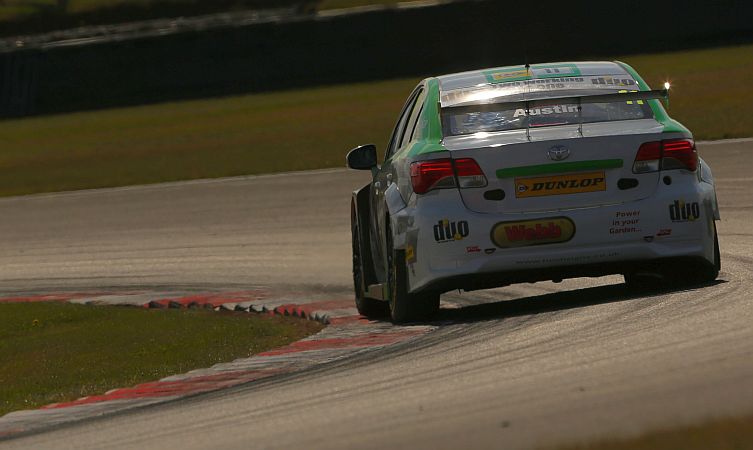 After a lengthy delay the race was restarted, with the drivers now let off their leashes to scavenge the best result and best points haul. Among these, Shedden put in an outstanding performance, at one point pushing Rob Austin down to fifth on lap three. But it was only a momentary set-back, the Avensis driver clawing his way back into third a few corners later in a battle for the final podium position.

During the latter stages of the race, Austin successfully defended his place against multiple BTCC champion Jason Plato, Andrew Jordan and Colin Turkington, securing the team its maiden podium finish as well as the first Independents Trophy class victory. 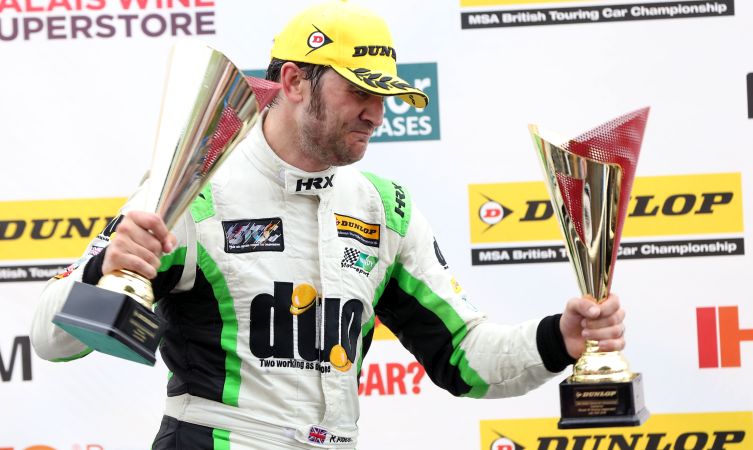 An ecstatic Rob Austin commented after the race: “That was great. It’s the best result for Handy Motorsport, so it’s fantastic. Thanks to the fans and everyone at the team.

“You’re always concerned when Jason Plato is behind you! I started to lose the rear tyres but I was quicker in the right places under braking, so I knew it’d be hard for him to get past me. Fortunately, he couldn’t get close enough and I held my own. It’s been a tough start to the year but we turned a corner at the test day.”

Rounds 19-21 take place on 13-14 August at Knockhill Circuit in Scotland. Return to the blog the following Monday for a full report on what is certain to be another exciting race weekend.