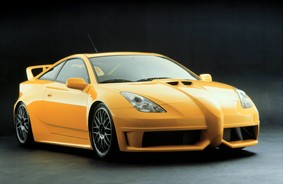 These are our #ThrowbackThursday posts from March 2014.

Although some missed the presence of a halo GT-Four model when the seventh-generation Toyota Celica range was launched in October 1999, fans didn’t have to wait long for something to tickle their motorsport fancy.

Powered by an updated version of the same engine used in Toyota’s championship-winning IMSA GTP race cars and Rod Millen’s record-setting Pikes Peak hill climb runners, it certainly had the performance and mechanical heritage to back-up its ‘Ultimate’ tag.

Is this your ultimate Celica? Or do you think that accolade should go to cars such as Jonny Milner’s supercar-trouncing GT-Four or Adrian Smith’s ‘GT4-X‘ sprint car?

Bookmark this page and come back here every Thursday for the following week’s instalment. Or search for #ThrowbackThursday on our  Facebook, Google+ and Twitter feeds.

The Toyota GT86 launched in the UK in June 2012 and was proclaimed to be the world’s only current sports car to feature a front-mounted, horizontally opposed engine and rear-wheel drive. But it could not claim to be the first.

That honour went to this little beauty – Toyota’s two-cylinder boxer-engined Sports 800, which the company began developing in 1962 as its first sports car and put into limited production (just over 3,000 were made) between 1965 and 1969.

Interestingly, the Sports 800 made an appearance at the 1979 Tokyo Motor Show as a prototype hybrid model, powered by a gas turbine engine feeding an electric motor via a generator. Just goes to show that the idea of a hybrid sports car is not so new after all…

#ThrowbackThursday: Hail the ‘King’!
The Toyota Celica Twin-Cam Turbo was the product of one of the most exciting phases of rallying, when the World Rally Championship adopted its Group B regulations between 1983-86. Though rival manufacturers had begun using four-wheel drive, the Celica’s 380bhp output was channelled through the rear wheels only.

Despite this seeming disadvantage, the Celica was phenomenally fast and incredibly strong, while its third attribute of reliability also led to its clean sweep of three consecutive Safari and Ivory Coast Rallies. It quickly earned the nickname ‘King of Africa’.

No, there hasn’t been a clerical error. As futuristic as it looks, this is indeed a valid candidate for #ThrowbackThursday

The radical Toyota Motor Triathlon Race Car (or MTRC for short) concept was revealed ten years ago at the 2004 Geneva Motor Show. Powered by four in-wheel electric motors, the MTRC was a tandem two-seater designed to compete off-road, on race tracks, and through city street circuits.

But when would a driver come across such varied surfaces, you might wonder? Quite frequently, as it happens… in the virtual world. That combination of tracks is common in video games, which explains why the MTRC was the first Toyota concept car that you could ‘drive’ in the popular Gran Turismo video game series.

This merging of real-life concepts with the virtual world is something Toyota has explored again with the exciting new FT-1 concept.

Toyota at the 2014 Geneva Motor Show