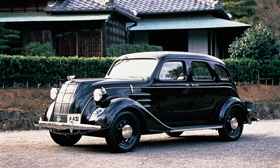 What better car for this week’s #ThrowbackThursday than the vehicle that kick-started it all for Toyota.

The Toyota Model AA may have been a simple four-door saloon powered by a six-cylinder engine, but it had the distinction of being the first home-built car for the Japanese market.

Its public debut prompted the Japanese government to give the Toyoda Automatic Loom Works permission to build vehicles, opening the way for the founding of Toyota and the immediate construction of its first car factory.

Click here for more information on the beginnings of Toyota’s most successful model line.

Let’s have some ‘Fun’ with this week’s #ThrowbackThursday…

Designed in Europe, the Toyota Funtime concept was one of a trio of models created under the so-called ‘Fun Project’ displayed at the 1997 Frankfurt Motor Show. The primary aim of the project was to explore the versatility of a shared platform, which later became a production reality in Toyota’s New Basic Car programme.

This platform underpinned the first-generation Yaris, however it soon became clear that the Funtime’s overall design was extremely influential in the overall styling of the new Yaris.

We’re being a little big cheeky with this week’s #ThrowbackThursday as this Toyota Coaster may look like the minibus that first introduced back in 1969, but in fact it’s bang up to date – a 2014 model.

A team of Toyota technicians scoured old storehouses and even scavenged scrap metal from around Japan to build this bus. Rusted panels were polished up and damaged parts were reproduced from original drawings to make this Coaster prototype.

The Coaster bus can be seen today all round the world, from Hong Kong and China to Bolivia and Panama, but the one in this picture is unique.

It’s #ThrowbackThursday – our weekly look through the Toyota archives and this week we’ve found this beautiful 1994 Toyota Celica Cabriolet.

It seems to have been raining for months now and we’re all yearning for some warm sunshine, an open road and a classic convertible with which to feel the wind in our hair without being battered by the elements. Oh, to be in a car like the Celica Cabriolet!

More on the History of the Toyota Celica