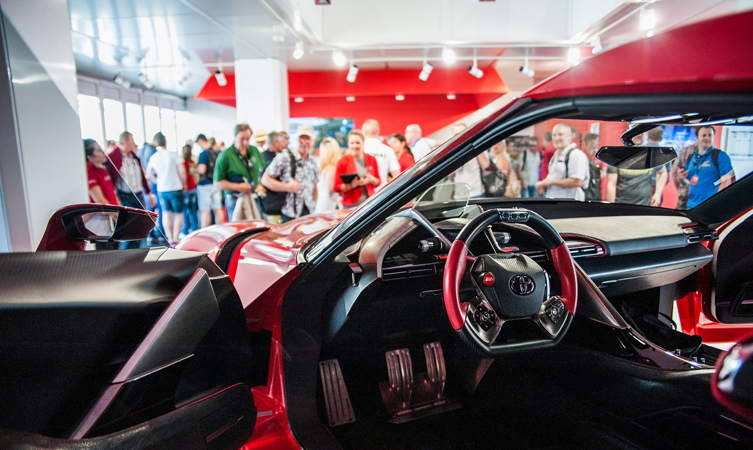 The fields surrounding Goodwood House are emptying after a dazzling, sun-drenched weekend of motoring at the Festival of Speed.

During the festival, we asked our followers to use the hashtag #ToyotaSpeed to share what got their engines revving throughout the weekend and we had a tremendous response.

@ToyotaGB I've had an excellent, very Toyota based couple of days at #FoS #toyotaspeed pic.twitter.com/cMAmW2vsGG

The Toyota stand was crammed with visitors throughout the weekend, many of whom were drawn to the stunning FT-1 concept, and artist Justin Fong’s four day-long mission to capture its beauty on canvas.

The FT-1 couldn’t have been positioned any better on the stand, as Toyota paid tribute to the heritage that inspired the concept with the ever-popular Supra and an exquisite Toyota 2000GT either side of the concept car.

Outside, Anthony Davidson and Mike Conway’s TS040 Hybrid LMP1 racer stood proud next to the Britcar GT86. With such exciting models surrounding it, one would expect the Aygo, decked out with its x-wave convertible roof, would be easy to miss. On the contrary, the little red runabout proved to be a big crowd pleaser.

#ToyotaSpeed #GFS The little Aygo seemed to be the most popular car every time I passed the @ToyotaGB stand today! pic.twitter.com/M863IAVEzr

Toyota had a strong showing at the traditional Hill Climb event, with Rod Millen on-hand to send the Celica Pikes Peak screaming up the hill in a time of 45.88 seconds, placing him third overall across the weekend.

Other racers included Mike Skinner in a NASCAR Toyota Tundra (50.22) and Anthony Reid, who set a time of 50.27 seconds in his NASCAR Camry.

Out on the Goodwood Motor Circuit, Toyota held its incredibly popular GT86 drift school, teaching drivers young and old the basics of spin and drift control in a trio of spectacular GT86 models. As the sun beat down on the tarmac throughout the weekend, the soaked skidpan was the coolest place to be found.

Of course, no highlights round-up would be complete without a mention of the six classic-liveried GT86s, which could be found all over the site throughout the weekend. Some even turned finding all six models into a game, as you can see below:

#Toyota #toyotaspeed two more to find got a catch em all!! pic.twitter.com/zgmyuzzy2G

What was your Festival of Speed highlight? Tweet us with the hashtag #ToyotaSpeed and let us know!