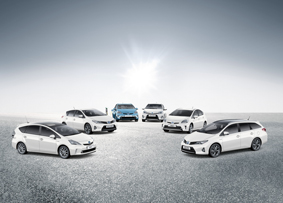 Though the Toyota Prius is synonymous with hybrid motoring, Toyota’s range of hybrid cars has expanded greatly over the past two years, and now includes small hybrid cars that are ideal for everyday life: the Yaris Hybrid supermini and family-oriented Auris Hybrid compact hatchback.

Launched in 2012, the Toyota Yaris Hybrid became the Europe’s first full hybrid supermini. By cleverly re-engineering the latest Hybrid Synergy Drive powertrain, Toyota engineers were able to downsize the hybrid system so that it would fit in the supermini without reducing available space in the cabin or rear boot.

The system uses a 1.5-litre petrol engine (reduced from 1.8-litres in other Toyota hybrids) and a more compact electric motor and battery pack to achieve this remarkable accomplishment in what is such a small car to begin with. The total system output of 98bhp results in the ideal urban hybrid – nippy and manoeuvrable in city and town driving, while also able to drive for up to 1.2 miles on electric power alone.

The obvious appeal of hybrid technology is its substantial improvements in fuel economy and significantly reduced carbon emissions. These advantages make the Yaris Hybrid the most efficient car in its class, achieving up to 80.7mpg on the combined test cycle and emitting such low levels of CO2 that it is exempt from annual road tax.

As Toyota’s history with hybrid cars dates all the way back to 1997, the technology is both tried-and-tested and becoming much more affordable; the Yaris Hybrid starts at just £15,495 and has the same confidence-inspiring five-year warranty as all non-hybrid Toyotas (and eight years’ peace of mind on hybrid components). Learn more about this supermini marvel in our Yaris Hybrid review.

If the Yaris Hybrid supermini isn’t quite big enough but you don’t need a large family car, the compact Toyota Auris Hybrid hatchback is the perfect choice. The Auris Hybrid has been built in the UK since its introduction in 2010, and the second-generation Auris Hybrid brought with it a number of improvements when it went on sale in January 2013.

With a dynamic new look, the Auris Hybrid is both lower and lighter than the original model, and uses the latest Hybrid Synergy Drive system – a 1.8-litre petrol engine and compact electric motor powered by a battery pack located beneath the rear seats. Similar to the Yaris Hybrid, the extra components in the hybrid powertrain are cleverly packaged so that the Auris Hybrid has the same luggage space as non-hybrid models.

Each generation of Toyota hybrids bring improvements in fuel economy and tailpipe emissions, and the Auris Hybrid is no different in that respect. The latest Auris Hybrid leads the competition with just 87g/km of carbon dioxide with virtually no NOx or particulate emissions, and returning 74.3mpg on the combined test cycle.