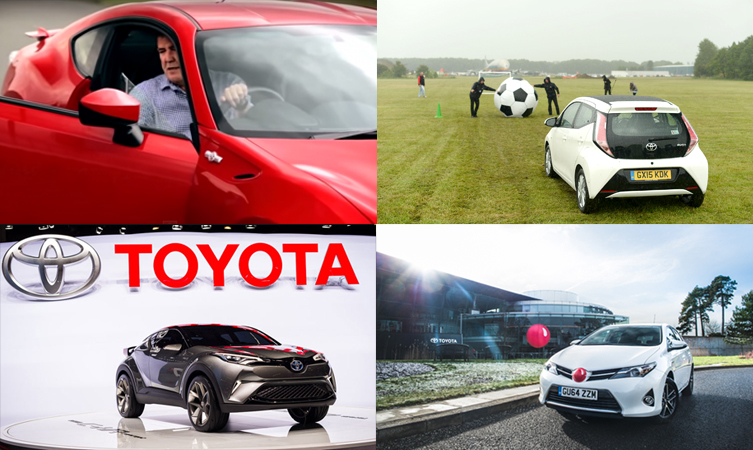 Whether it was a look inside a Toyota factory, a laugh-out-loud charity fundraising effort, a sports day with a difference or a glimpse at a new Toyota model, you can bet we had it on tape this year.

The Toyota UK YouTube channel has grown significantly over the past 12 months, as has our video content on Facebook and Twitter – so here’s a round-up of the most popular Toyota videos we’ve shared in 2015.

Sit back, relax, grab the popcorn and enjoy!

We love speaking to the Toyota fans and enthusiasts who get in contact with us via our Facebook, Twitter and Instagram channels, and wanted to come up with a way of saying thanks – so in June, we held the Toyota School Sports Day.

Packed with fun school-inspired sporting events including an egg and spoon race with a difference, the day went down a treat with the Toyota-loving competitors. Sadly we had typically wet sports day weather, as you’ll see in the video below!

The 2016 Toyota Proace has just been unveiled this month, and it’s a clear step forward for our mid-sized van, which will also be available in an MPV format.

Built in partnership with PSA Peugeot-Citroën, the car will share parts and technology with the French brands’ models, but have a design all of its own. Take a look at the video to get a detailed look at it.

Toyota GB became an official Red Nose Day partner this year, helping to raise £756,309 for the event. Our dealerships, and staff at our HQ, factory and affiliates like Toyota Material Handling sold red noses to raise funds for the charity.

We wanted to encourage as many people as possible to buy a nose and stick it on their car – as is explained in the video below.

This video shows what happens as the hydrogen-powered car is finished and perfected before leaving the plant.

Toyota is heading back to the World Rally Championship in 2017, supported by racing legend Tommi Mäkinen’s team. Here’s a look at the early testing and preparation work.

More action from the Mirai production line at Motomachi Plant in Japan, showing the installation of the fuel cell stack, hydrogen tanks and the important hydrogen leak test, which is performed using helium.

Our ‘Project Chuckle’ Comic Relief film features a sideways look at life at our headquarters, a ticklish car and a very special guest.

The Toyota C-HR concept appeared in public for a second time at the Frankfurt Motor Show in September – it’s is a design study for a stylish, lightweight and dynamic hybrid crossover that will stand out from the crowd and be faithful to Toyota President Akio Toyoda’s promise to build ever-better cars that put the fun back into driving.

No surprise it was a popular video then!

A look inside the new Toyota 1.2-litre turbo engine showed off all of the clever technology it’s brought to the Auris range. More power, responsiveness and better efficiency? Sign us up.

Our ‘Jeremy Clarkson does Toyota’ highlights reel was our most-watched video this year. Take a look below for some classic moments including the Polar Hilux, the Toyota that wouldn’t die, his stellar GT86 review and much more.

If you’ve enjoyed these videos as much as we did then don’t forget to subscribe to the ToyotaUKTV YouTube channel to get our latest videos as they’re published.