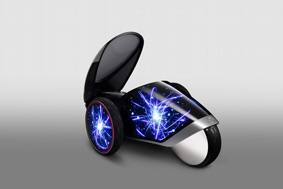 Did you catch the Toyota FV2 concept making its European debut at the 2014 Geneva motor show?

You can have a sneak preview of the FV2 in a free virtual concept car racing app. The app can be downloaded from either iTunes or Google Play.

In the app you can complete stages, collecting ‘Illuminations’ as you race and grow your FV2. There’s also a real-time championship, where you can compete against other FV2 racers online.