It’s the end of day three of our marathon trip, the first two days of which saw us stopping in Rochford (Essex), Norwich, Washington (Tyne & Wear), and Sunderland, before spending Saturday night in Hartlepool.

Despite yesterday’s 1.15 bedtime, this morning we were on the road just after 9am, backtracking south to Northallerton, North Yorkshire, and a meeting with Peter – a confirmed Prius fan. In glorious sunshine we spent a happy hour or so driving literally up hill and down dale with Peter and wife Caroline, managing to spook a crowd of walkers by lapping the quiet square of a market town in the car’s almost silent EV mode. After a while, it was back into town for a rendevous with local centre RMB Toyota (Northallerton), who know Peter well. 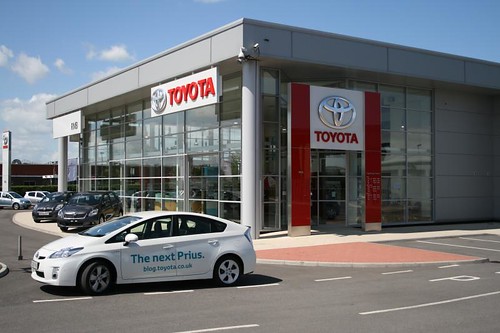 I’ll leave it to Peter to tell you what he thought of the Prius, but among the highlights for him were the car’s head-up display and Smart Entry systems. 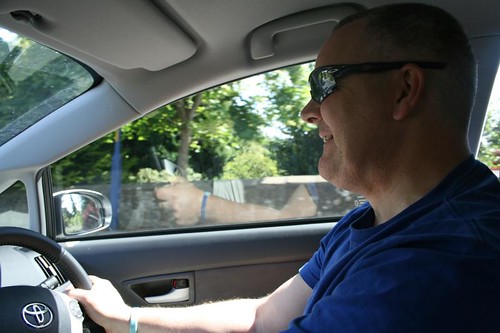 Next up was another backtrack, this time north to RMB Toyota (Teesside) who we weren’t able to fit in as planned yesterday. There we met business manager Paul Roots, Martin Allen and Michael, and were able to oblige with a spontaneous test drive for a couple who just happened to arrive at the right time. After a quick call on the neighbouring Lexus dealer, Alex was behind the wheel for our trip to Glasgow. 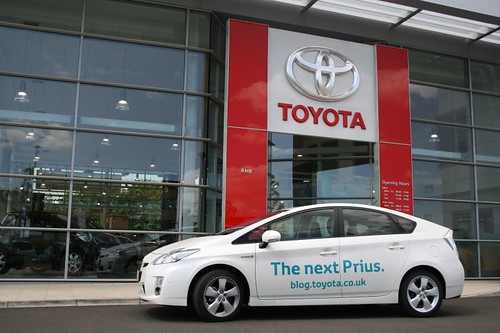 With Alex due to return to Toyota head office tomorrow, I thought he might appreciate the chance to stay at the Prius’ wheel for all of the 187.9 miles we were about to tackle, but it turned out to be the most challenging stint to date. As we drove the A66 east, the country gathered itself into the Pennines, and the clouds gathered into slight, steady and then epic rain. While the Prius wasn’t bothered, the standing water and spray made economical driving a bigger challenge. At least it also made for some fantastic photos. 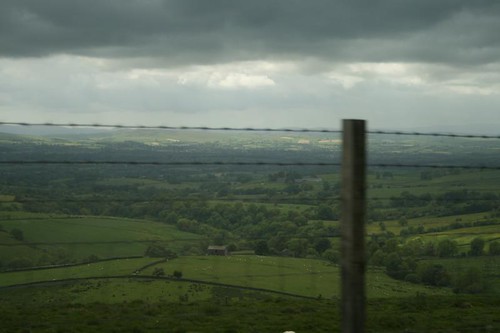 Things had cleared up by the time we turned onto the A6 and headed north, and picked up further when we managed to stop for a late lunch – before we could get it, Alex amused himself with the reverse Parking Assist. 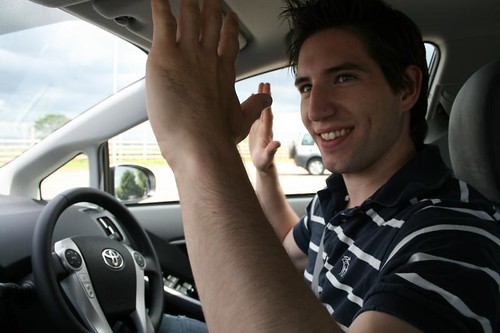 The next 50 miles or so passed with nothing more remarkable than an oft-swerving lorry to look out for, before – now on the A74(M), north of Lockerbie – we begun a relentless climb, and the heavens opened again. At one point, wondering when the climb would ever stop, we realised our average economy for the stint had dropped to ‘just’ 66.4mpg. By the time we rolled into Glasgow, after a shorter and much less tiring day, Alex had managed 69.3mpg and an average speed of 47mph. 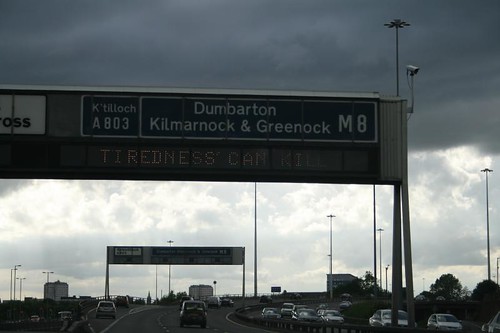 Yesterday, the scale of what we’re doing began to dawn on me. Tonight the Prius’ mileage since leaving Brighton just ticked past the 1,000 mark – having reached 1,000.6 miles by the time we’d parked for the night.

The two of us, and the seven other drivers who’ve taken the wheel, have averaged 36mph and 71.6mpg so far. With Liverpool and south west Wales still to go, I think we may have another 1,000 miles before our journey ends – it’s a good job we’re having fun.