We’ve completed day one of our marathon drive around the UK in the new Prius, and after repairing to the hotel for food and a brief rest, it’s time for a proper update.

We’ve had a fantastic day. It started in Brighton on the south coast, where I had to park our third-generation Prius – one of perhaps 20 or so in the country – in the same space where I managed to hurt the second-generation car we had recently. Fortunately, manoeuvres before and after Paul applied graphics to the car passed without incident. 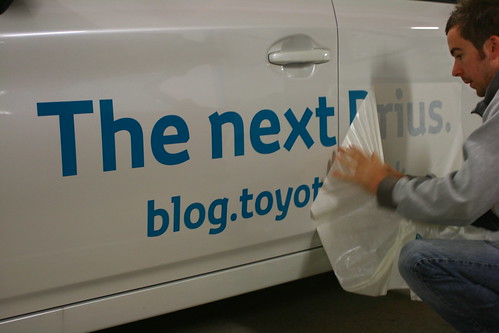 With the Prius looking better than ever, it was off to collect Alex from Toyota GB HQ in Epsom so our trip could get properly underway. There, a small crowd of eager onlookers quickly gathered to see the Prius and wave us off on the way to our first rendezvous. Some 60.4 miles from Epsom, and with a trip average of an amazing 83.7mpg on the computer, we arrived at the house of Lionel and Elizabeth Pryor. 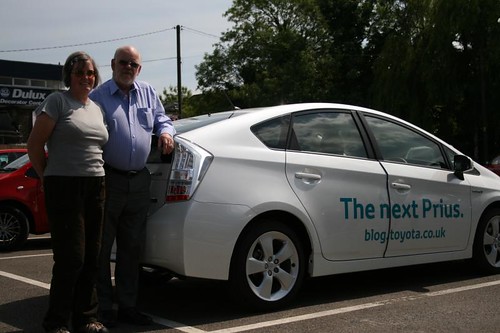 Lionel, pictured here with Elizabeth on the forecourt at Lookers Toyota Rayleigh, bought his current T-Spirit about a year ago, and has left us several comments over the past couple of weeks. As we talked over the controls in the hot afternoon sun, I was glad of one of the Prius’ many party tricks – running the air conditioning from the hybrid battery without the engine having to start. Once on the move, we chatted about his current car and his impresions of the new one while we explored the Prius’ driving modes, but before long we had to leave Essex for our next appointment in Norwich. Over 14.2 miles, Lionel averaged 19 mph, with fuel economy of 60.2 mpg.

Taking the wheel for the first time as we headed off to Norwich, Alex soon became worried that he wasn’t driving efficiently enough – with the Prius reporting ‘only’ 55mpg or so after his first few miles. 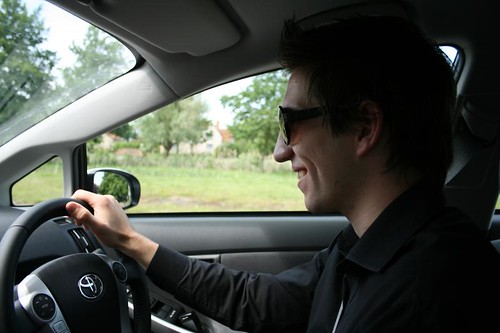 I pointed out that the hills and bends as we left Rochford made it tricky to drive efficiently, and sure enough Alex needn’t have worried. By the time we were approaching Norwich to meet up with Hamza, Tony, their friends and the kind staff of Dingles Toyota, Alex was well above 70mpg. By this point, we had other things to worry about, though. Traffic, diversions and our own over-optimism when planning the route had us arriving almost an hour late at Dingles.

While the patient crowd got their first look at the car, I noted down the figures for Alex’s first ever drive of the new Prius: he’d managed 74.9 in some rotten traffic – a great job. 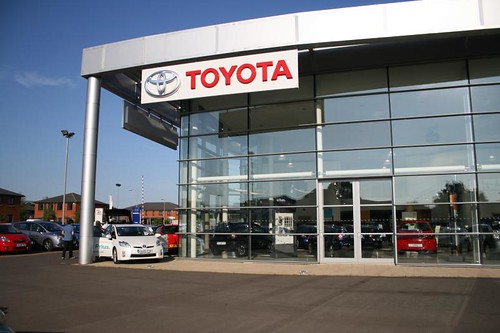 Although the day had already been long, we weren’t in too much of a rush to leave. While Alex accompanied Tony, Hamza and friend on a drive in the car, I stayed behind with Dingles sales director Simon Brydon – as excited about the car as the rest of us. Though the hotel beckoned, I tentatively offered him a blast in the Prius. I didn’t need to ask twice.

Tomorrow we set out early for one of the longest single legs we’ll be attempting; the five-hour, 250-mile journey from Norwich to Washington, Tyne and Wear. With that in mind, and with a long day behind us, it’s time to get some sleep.