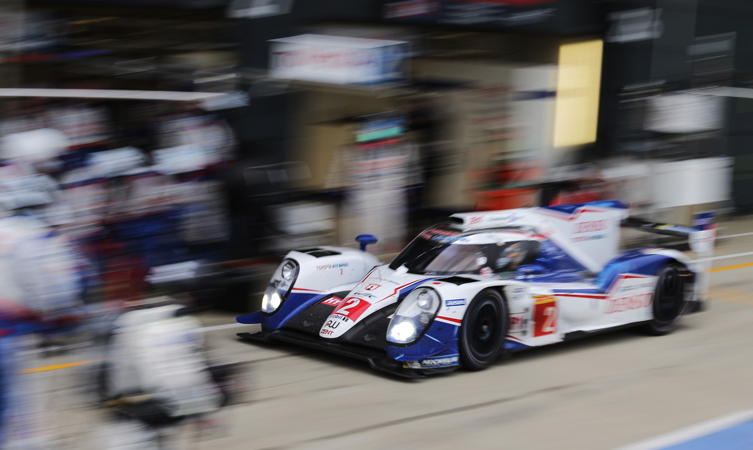 The 2014 World Champions faced tougher competition that in last year’s race, where they raced to a one-two victory, but with both cars making the top four the scene is set for an exciting season ahead.

The No1 TS040 Hybrid of Anthony Davidson (GB). Sébastien Buemi (CH) and Kazuki Nakajima (J) was in contention for a race win throughout, but was ultimately placed third behind the winning Audi. The No2 car of car of Alex Wurz (A), Stéphane Sarrazin (F) and Mike Conway (GB) put in a similarly battling performance to finish fourth, adding to a satisfying points haul for the team.

The early stages of the race were action-packed and after the first half hour the No1 Toyota held a narrow advantage in third. The second car was further down the road in sixth. After the second of two yellow flag caution periods, Buemi fell to fifth, struggling with lack of grip, but an incident between the No17 Porsche and No8 Audi elevated the Toyotas to third and fourth.

Davidson took the wheel at a quarter distance and was able to close the gap on the leaders, moving ahead at the next round of pit stops. The Toyotas ran 1-2 until Davidson had to cede to the No7 Audi after a wheel-to-wheel battle.

Both cars were still in the mix with two hours to run: the No1 car was in a fight for second with the No18 Porsche, while the No7 Audi pulled out a clear lead. The No2 Toyota was running fourth.

Buemi and Wurz drove the final hour, the Swiss pushing hard in pursuit of the Porsche. Ultimately, the No1 car just fell short, but Davidson was rewarded with the Richard Lloyd Trophy for the second year running, presented for the best performance by a member of the British Racing Drivers’ Club.

Davidson said: “It is great to win the Richard Lloyd Trophy and particularly nice to have won something today. This is never a circuit which plays to the strengths of our car and we usually struggle a bit here; last year’s one-two was helped a bit by the weather. I’m looking forward to the next races when I think we will be stronger. Hopefully as we get to circuits where tyre wear is a bigger factor, this will play to our strengths.”

Conway added: “It was a tough race. I picked up a bollard on the front of the car and it wrecked my first stint. I lost a lot of downforce and it was really unpredictable for the rest of my drive. When it was removed during the pit stop everything came back to normal and I tried to push to regain some time. At that point fourth was the best we could do so we brought it home and got some good points.”

Toyota Racing will be action again on 2 May at the Six Hours of Spa-Francorchamps in Belgium.