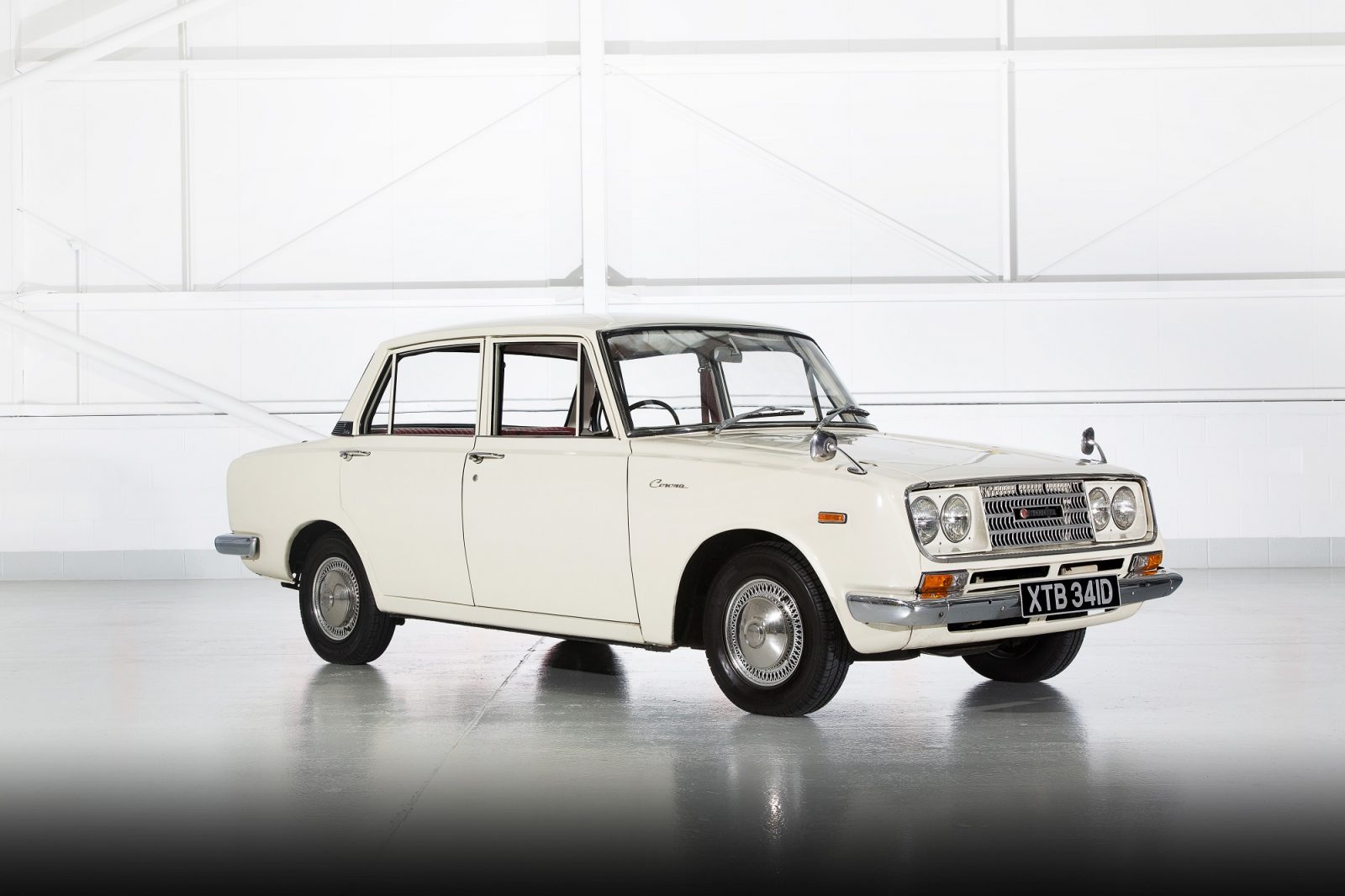 This year, Toyota celebrates its 50th anniversary in the UK. Over the years there’s been a host of cars that have played an extra special part in Toyota’s history and we’ve sought out prime examples to showcase in our heritage fleet here at Toyota GB.

In a series of posts showing you the vehicles that make up the our fleet, we’ll go into the history and provenance of each car, and the reasons why the cars have earned their place on our fleet. Here, we examine the 1966 Corona, the model that first introduced Britain to Toyota.

The Corona is a medium-sized family saloon and estate car that was launched at the 1965 Earls Court London Motor Show. The model was imported to the UK by vehicle dealer Pride And Clark, the company which would later grow and become Toyota (GB) PLC.

Measuring 4,089 mm – 139mm longer than the current Yaris – the Corona saloon was rival to the big-selling Ford Cortina and Vauxhall Victor models.

The model’s range comprised three model grades – 1200, Standard and Deluxe. Deluxe models were equipped with period luxuries such as a radio, two speed wipers and a heated rear window. A neat range-wide feature was a hinged rear registration plate that covered the petrol filler point.

Complementing the three-strong grade line-up was a choice of two engines. Both were four-cylinder overhead valve (OHV) units offering 55 and 74bhp. Standard and Deluxe variants were equipped with the higher output engine, good for a 90mph top speed and a 17.2 second 0-62mph sprint time.

While 1965 represented the first time that the Corona name had appeared in the UK, it was a different story in Japan. The Corona unveiled at Earls Court was in fact a third-generation model, code-named RT40. This name was a reference to the model’s 2R powertrain, the second in Toyota’s now legendary ‘R’ family of engines.

Sales of the RT40 were wound-up in 1970, by which time it had become the first single model ever to sell more than one million units in Japan. In total, 1.8m RT40 Coronas were sold globally.

The car remains tremendously important to Toyota as it was the first Toyota model and one of the first Japanese cars in general to find acceptance in the West. In fact the car was so well-received stateside that it was named Imported Car of the Year 1969.

In spring 2006, a Toyota dealership contacted the press office at Toyota GB informing us that it selling an immaculate Corona Deluxe.

Registered XTB 341D in 1966, the Corona had been on static display at the centre for some time, its purpose to attract passing trade onto the sales floor.

After some internal discussion, a decision was taken to purchase the vehicle and add it to the Toyota GB heritage fleet. XTB 341D officially became the property of Toyota GB in May 2006, just in time for its 40th birthday.

Our Corona is one of only two models of the RT40 vintage currently taxed in the UK. Virtually all of its mechanical components are original, testament to the reliability for which Toyota is famous. A new carburetor was fitted in 2008 and the semi-elliptic rear leaf springs were replaced last year, but these are the only major new parts that have been fitted to the model during our ownership.

The car’s solid white paintwork was resprayed 10 years ago and looks factory fresh, showing no signs of rust or wear and tear. The steel wheels are new, but the hubcaps are original and have been refurbished.

Inside, a Bluetooth® single DIN stereo has been fitted to make long journeys a little easier, but the analogue clock is original and still in working order.

Driving the car today, glorious though it is, provides a reminder of how far cars have developed dynamically and technologically. Stopping takes a great deal more planning than in a modern car, thanks to the fitment of rudimentary drum brakes, and the steering requires far more driver input than most of us are accustomed to.

The gearbox has a conventional shift action however, and the clutch is relatively light. The model’s ace is its sumptuous seats. Sprung heavily, they help take the strain out of potholed roads and uneven surfaces. The four-cylinder OHV engine has a raspy soundtrack that will be familiar to drivers of three-cylinder cars, a reminder of the advances in sound deadening that have taken place since the car rolled off of the line and England last held the world cup trophy.

When new, our Corona would have cost £790 and today it is worth between £6500 and £7000 depending on the strength of the classics market. The car is used for press events, company engagements and regularly attends historic car shows and hill climbs. The model will feature heavily in our golden jubilee activities, which will be announced shortly.