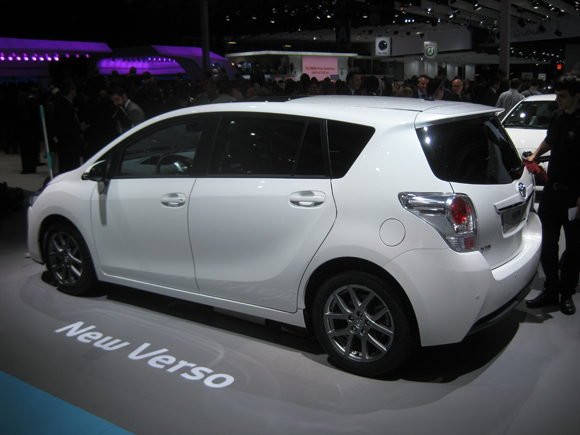 Toyota has taken the wraps off the new Verso at the 2012 Paris Motor Show. On sale early in 2013, the seven-seat model gets a smart new look and more upmarket interior to reflect Toyota’s new family identity.

Inside, there are new instruments and controls, while the Verso’s revised chassis promises  improved handling. An updated range of engines – including 2.0 diesel, and 1.6 and 1.8-litre petrol engines completes the package of upgrades.

Speaking at the car’s launch at the Paris Motor Show, Didier Leroy, President of Toyota Motor Europe said; “Toyota can be defined by one word… Better. At Toyota we’re dedicated to better”.

He promised that the new car will build on the established versatility, practicality and roominess of the current model, with more style and comfort, and a better driving experience.

“The car will set new standards for quality”, he said; “This car is a clear demonstration to Toyota’s pursuit of quality, durability and reliability”

Verso remains as roomy as ever and retains its best-in-class 975mm distance between the first and second row of seats.

Toyota’s Easy Flat-7 seating system delivers excellent flexibility, with 32 possible seating combinations. Individual seats are fitted in the second and third rows and those in the second row have a 195mm sliding adjustment range.

When all the rear seats are folded, new Verso has a flat load floor that is 1,575mm and 1,430 mm wide. With all seats in place the luggage volume is 155 litres; when the third row is folded, the figure rises to 440 litres.

There is a boot management system under the floor where items can be stored out of sight.

Verso’s 2.0-litre D-4D diesel engine has been revised to be quieter and have better low-speed power delivery. At the same time its CO2 emissions have been reduced by 10g/km to fall below 130g/km.

The towing capacity for all diesel-powered Verso has been increased by 200kg to 1,500kg.

The 1.6 and 1.8-litre Valvematic petrol engines will remain available. Both are matched to a six-speed manual gearbox, with the 1.8 optionally available with a revised Multidrive CVT that has been tuned to give more of a stepped gear shift feel, with engine revs more closely linked to vehicle acceleration.