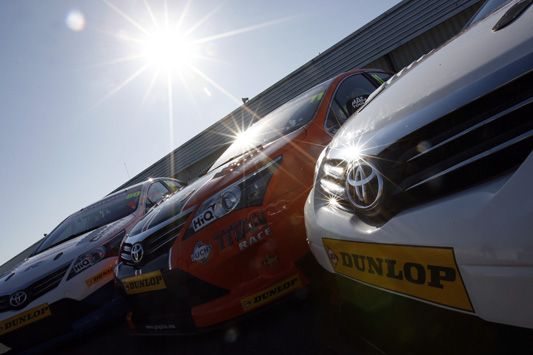 With a little over a week to go before the start of another action-fuelled season of the Dunlop MSA British Touring Car Championship, the new-look Toyota Avensis BTCC car made its public debut today. Toyota’s independent racers Frank Wrathall, Tony Hughes and Adam Morgan lined up their Burnaston-built contenders in the Silverstone pit lane during the championship media preview.

With its restyled and re-engineered front end, the new Avensis looks very different to the car which made its BTCC debut last season as one of the first of the ‘Next Generation Touring Cars’. The redesign has allowed the engineers of Dynojet Racing and Speedworks Motorsport to take a fresh look at engine installation and cooling, and has also helped them improve chassis stiffness.

Dynojet’s Wrathall is hoping to build on the dramatic late-season form he showed in 2011 and believes the off-season works carried out in the team’s Lancashire workshops will make all the difference. “The developments we have made will allow us to move on to the next level,” said the 25-year-old from Garstang, last season’s Rookie of the Year. “The installation of the engine is better, the cooling is better and all around the car we have made improvements based on what we learned during our first year.

“I hope it will mean that we can be regularly fighting for the podium. That is my aim, but of course the opposition will be strong and everyone else will be out to do the same thing.”

Wrathall’s first taste of his re-engineered Avensis and its X CTech R-developed 2.0-litre turbocharged Toyota power unit will come next week, a few days ahead of the 1 April BTCC opener at Brands Hatch. Frank scored four podium results in 2011, the best of them a second, and three Independents Trophy wins on his way to championship 12th. His sterling efforts were this month recognised by the British Racing Drivers’ Club, which has awarded him SuperStar status for the coming year.

The newest recruit to the Toyota ranks is 23-year-old Adam Morgan, who won his place on the BTCC grid thanks to his victory in the Ginetta Supercup – the richest prize in British motorsport, worth in excess of £200,000.

Adam’s Avensis is a completely new chassis, fresh from the Stockport workshops of Speedworks Motorsport, and was given its tentative first shakedown laps today. But the Ribchester racer has been fortunate to be able to borrow the Toyota of his team-mate Tony Hughes with which to practise in recent weeks. “I have had three good days of testing,” says Adam, pictured above left alongside Hughes and Wrathall, “working with the engineer and trying different set-ups, and it has all gone pretty well.

“I have been getting used to the feel, the need to warm up the tyres, which is crucial, and the way the car is set up, particularly at the rear. I struggled a bit at first but the more miles I have covered the more used to it I have become. Now I just can’t wait to get out there and race.”

Hughes is raring to go also and, despite selflessly giving up seat time to help Adam, has covered many useful laps himself. “By the beginning of the season I should have had about five days of testing,” said the 54-year-old from Alderley Edge, Cheshire. “It has all helped immensely and we are able now to put together all the pieces of the puzzle, and I think the car will work well this year. My target is to try to finish as many races as possible and to try to get a top-10 finish – that would be like a win for me.”

Both the Speedworks Toyotas are powered by the 2-litre ‘spec’ engine developed by BTCC organiser TOCA.

TOCA is expecting 24 cars on the grid at the start of the season, with 14 teams representing nine different manufacturers. This year’s Dunlop MSA British Touring Car Championship starts and finishes at the historic Brands Hatch circuit in Kent, and between those 1 April and 21 October events will visit the Donington Park, Thruxton, Oulton Park, Croft, Snetterton, Knockhill, Rockingham and Silverstone circuits on its round-Britain tour. All 30 races will be screened live, with a minimum of six hours on ITV4 and ITV4 HD from each meeting, simultaneously broadcast on the itv.com website.