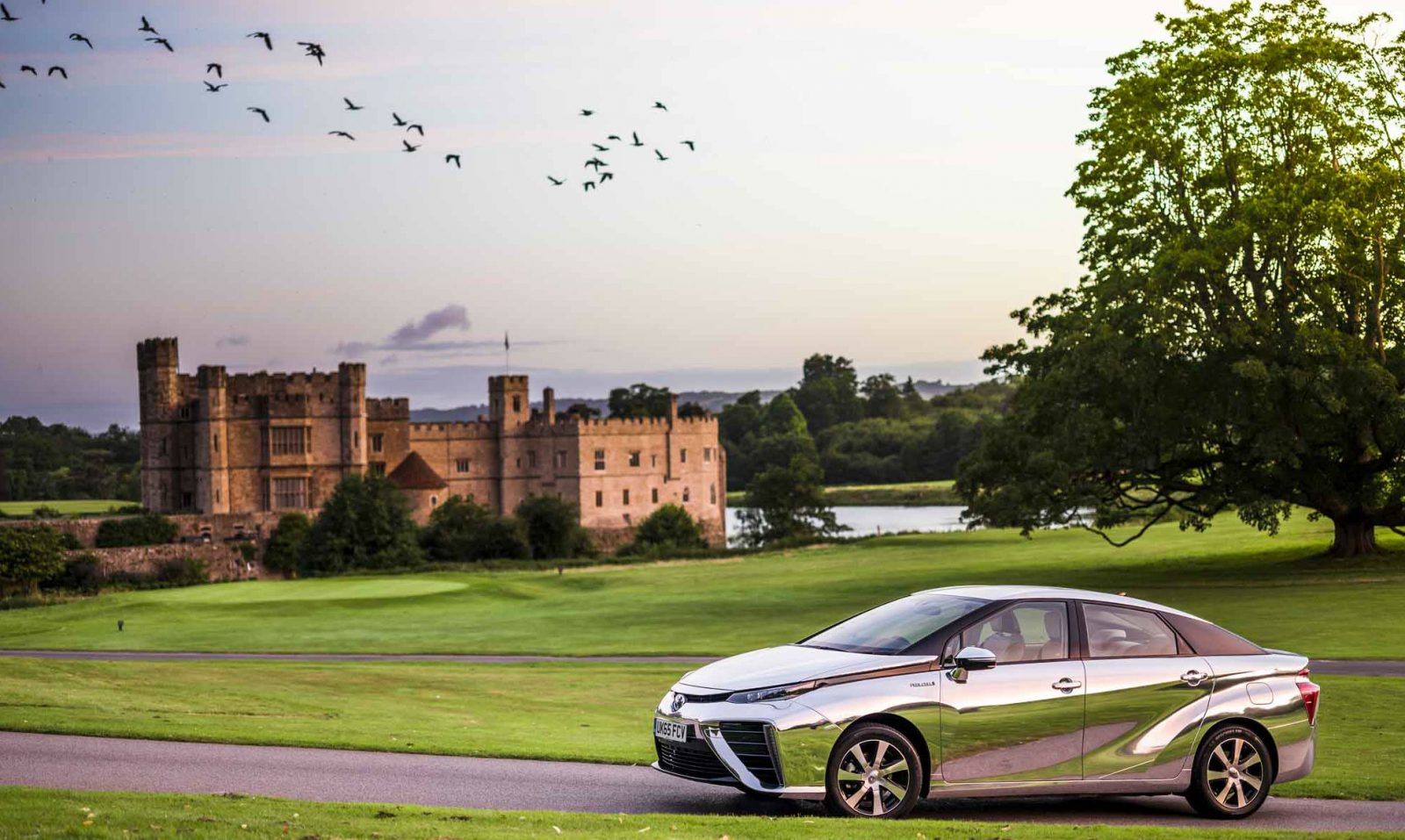 We wanted to make a bold statement. So we covered our Toyota Mirai in a chrome wrap and decided to photograph it in front of one of the most beautiful castles in England.

This is the story of our Mirror Mirai photoshoot. 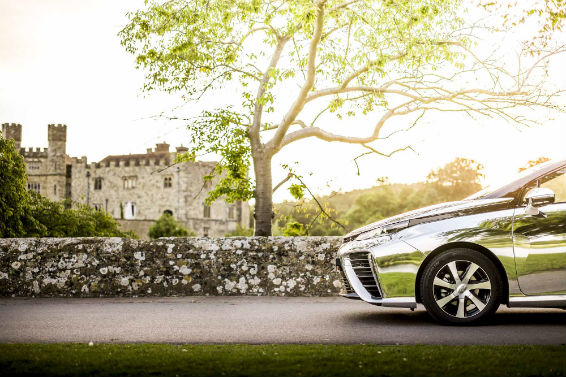 The Toyota Mirai is one of the most innovative cars on the planet. Designed and engineered from the ground up, the car is powered by hydrogen. And water vapor is its only emission.

When the Mirai was to make its UK motorsport debut at Gurston Down Hillclimb earlier this year, we covered the car in a chrome wrap to highlight its uniqueness and make it stand out from the crowd.

The mirror-like surface caught the public’s attention at Gurston and during its next public outing, at Goodwood Festival of Speed.

So when it came to commissioning a set of pictures of the chrome-wrapped Mirai, that word ‘mirror’ stood out. We had our theme: Mirror Mirai, an alliteration and a pun on the question the evil queen asked her magic mirror in Snow White.

Thoughts turned next to a location for our photo shoot – we needed a fairytale-like location to show off our shiny Mirai and the idea for that came quickly too.

Leeds Castle in Kent is known as “the loveliest castle in the world”. Take in the view of the castle surrounded by the lake, and it’s easy to see why. With a 1000 years of history, the former home of Henry VIII was the ideal place to juxtapose the past with the future – Mirai means future in Japanese. 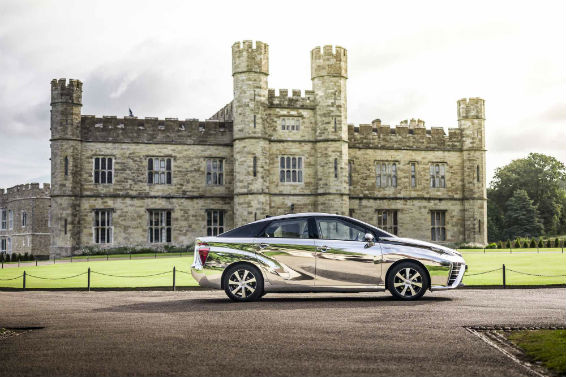 After a scout around the the castle and a chat through the project with our photographer Phil Steinhardt, we had our location, our brief and our date. We wanted to catch the sunrise over the eastern walls of the castle – hoping the dawn light would make the Mirai look even more magical in the fairytale setting.

Leeds castle is around 70 miles from where our Mirai is garaged so, the night before the shoot, we took the car to be refuelled at the Air Products station on the edge of Heathrow Airport.

Filling the car with hydrogen is not so different to filling a normal car with petrol or diesel. The filler cap is on the left rear of the car. After keying in the PIN code on the fuel rig, you insert the nozzle on to the car, lock it in place and pull the trigger on the nozzle like you would at a normal petrol station. A few minutes later, the car had its full tank of 5kg of hydrogen and we were ready to go.

The alarm was set for 3.30am and the only cloud on the horizon was literally that – cloud. The forecast indicated cloudy skies at dawn, which would scupper our plans of using the idyllic sunrise light. Fingers crossed.

We needn’t have worried though, as the photographs show, we couldn’t have hoped for better as Leeds Castle was bathed in pinky, orangey light at dawn. 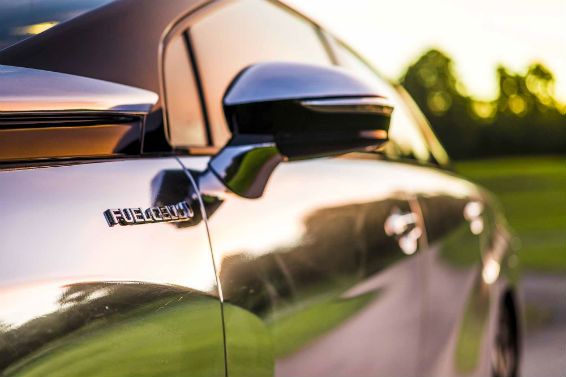 However, this dreamy light doesn’t hang around for long and so Phil was working double-time to get the shots we needed. There were a couple of locations around the eastern edges of the castle that we wanted to capture before it got too light. 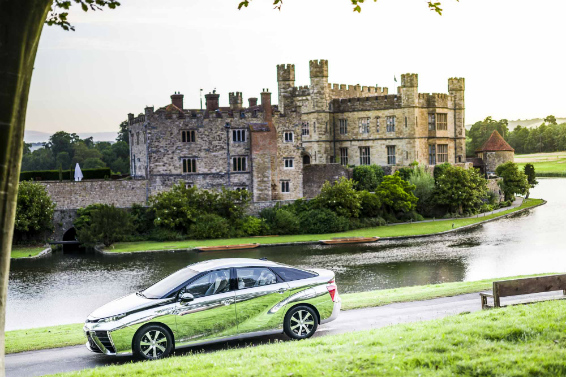 It’s not easy photographing a chrome car as you don’t want the crew to be in the reflections, so we were standing well back from the car while Phil was taking his pictures, then sprinting back and moving the car onto the next location. 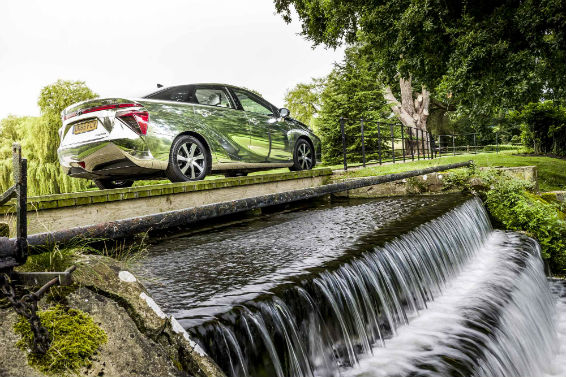 Ian Humphreys from Leeds Castle was excellent, taking us from location to location, suggesting alternative locations and giving us a running commentary on the castle’s wildlife – kingfishers darting among the reeds, the carp coming to the surface of the lake and the habits of the geese, which as though on cue rose up from the water and gave us a flyover on one of Phil’s shots. 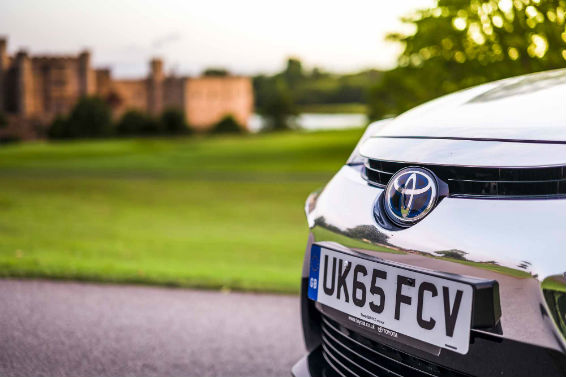 Before long, it was time for a well-earned bacon sarnie break in the castle’s restaurant ahead of the final locations over the bridge and into the castle grounds. Sam, from the castle’s PR team, took us into the area in front of the castle where the staff got to have a good look at the car. 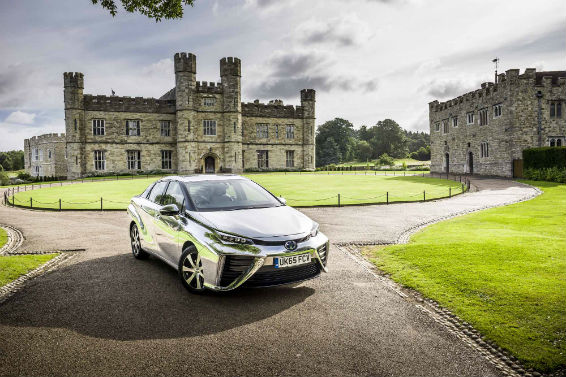 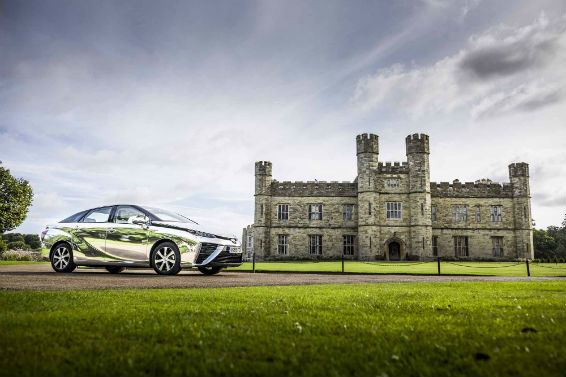 Reflecting on the car of the future

With the final few shots done, our Mirror Mirai shoot was finished. Leeds Castle had looked stunning, the weather had held and Phil felt he had a good selection of shots .

The thing about this though that despite the fairytale setting, the Mirai is no make-believe car. Take Green Tomato Cars, for example. It has two hydrogen cars on its fleet. The drivers ferry passengers around the capital every day in quiet, emission-free luxury.

Follow the likes of Theo The Mirai driver on Twitter, and you can see that living with a hydrogen car right now is a real, practical, every day reality for some people – not a fairytale.

We love this set of pictures, let us know what you think in the comments section below.