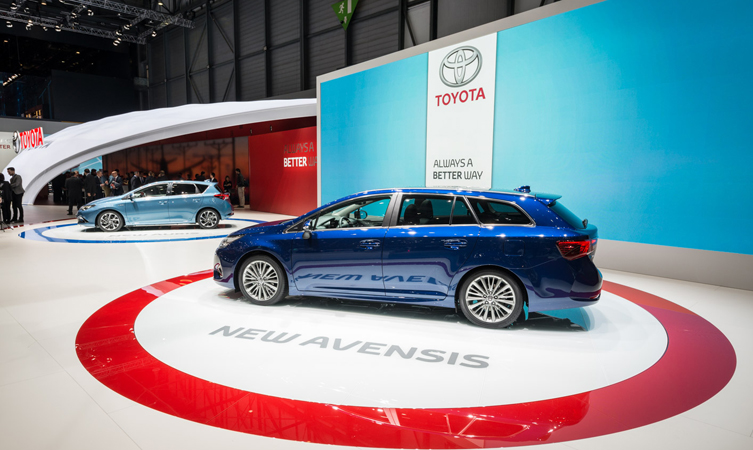 Our team from the Toyota blog has been reporting from the 2015 Geneva motor show, supplying the latest news, announcements and pictures from the show floor. Scroll down through this post to catch up on all the news from the Toyota stand.

16:05 We love this. Toyota’s story of the Geneva motor show is summed up in a single picture by @scriberian.

15:16 The Toyota Auris has a smart new look but there are some important changes underneath the bonnet too. There is a new 1.2-litre turbocharged petrol engine that is part of a range of new Toyota engines being introduced in the near future.
Get the lowdown on the new engine: New Toyota 1.2T engine in detail

14:02 The 2015 Toyota Avensis will be built in Britain at the Burnaston plant in Derbyshire. There’s a lot of interest in the new car – it’s one of the most popular stories here on the blog at the moment. But in case you’ve missed it our photographer snapped the car as it was being unveiled.

You can see the full gallery of pictures here: 2015 Toyota Avensis revealed

11:25 Karl Schlicht, Toyota Executive Vice President says: “Our customers can trust Toyota, but Toyota can also be trusted to create a couple of shockwaves, we did it last month with the new Mirai. The world’s first fuel cell production car, here on show for the first time in Europe at Geneva.”

Demand has already pushed us to increase production, but the technology really is incredible.

Mirai will shape the future of the car, just like Prius. It will join electric cars and hybrids to form a key element of our future mobility road map.”

11:20 The Toyota Press conference is about to begin.

10:15 Our photographer has been busy already snapping the range of cars on show at the Toyota stand. Have a look in the gallery below. If you have a question for us, get in touch with us on Twitter or Facebook.

08:41 There have been significant changes under the bonnet to the Toyota Auris. Changes include the introduction of a new 1.2T turbocharged petrol engine, a new 1.6 D-4D diesel and the 1.4 D-4D diesel has been heavily updated.
Read more: Toyota Auris 2015: engine line up explained

08:03 At the Geneva motor show, Toyota introduced Toyota Safety Sense, new set of active safety technologies designed to help prevent accidents, or mitigate their consequences. All cars equipped with it will feature a Pre-Collision System (PCS) with an “urban” function and Lane Departure Alert (LDA).
Read more: Toyota Safety Sense: a new level of active safety for the Toyota range

07:15 Good morning from Geneva. There’s been news from the show already, with full details announced on the new Toyota Auris and Avensis.

The new Toyota Avensis aims to make things easy for the customer, with new style, new engines and innovative technology. Regardless of version or equipment grade, it is designed to be a prestigious, trustworthy, safe and comfortable companion.
Read full story: 2015 Toyota Avensis revealed