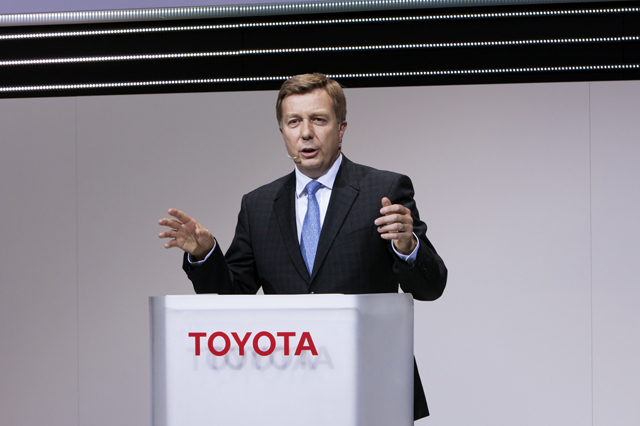 Didier Leroy, President of Toyota Motor Europe, looks his usual relaxed self when we catch up with him on the second day of the 2014 Geneva Motor Show, writes Andrew English.

The annual car show is not yet open to the general public, and Leroy, like many of his fellow senior managers, has spent the last 48 hours sitting in a hot, windowless interview booth, answering a bewildering and sometimes surreal array of questions from hundreds of journalists

You get the impression that it’s all in a days work for this affable 56-year old Frenchman – whose personable introduction quickly reveals that he collects new jobs, but doesn’t seem to drop his old ones.

According to the business card, he’s not just Toyota Motor Europe’s president, but also its chief executive. He’s a chief quality officer for Europe and was appointed a Senior Managing Officer for the Toyota Motor Corporation in Japan in 2012. And as if that weren’t enough, he is also chief executive of the Europe Region and managing director at TMG – Toyota’s European Motorsport division.

But is his toughest test still ahead of him? Having been appointed president of TME in 2010, Leroy and his team have fought to get the company back into shape and making sustainable profits.

Now he faces a new task, that of making Toyota cars better to drive, and more exciting… As decreed by Toyota Motor Corporation President Akio Toyoda in 2010.

Leroy admits that Toyota cars, while perceived as reliable, well-built and durable, might not be the world’s most exciting. “World-wide, Toyota is seen as a successful company,” he says, “but probably a little bit too rational – not enough fun, not enough emotion.”

He says that this is something he is committed to changing: “Akio Toyoda has now requested that Toyota in Europe becomes the world-wide competency centre for interior quality and driving pleasure.”

“We know that European customers are some of the world’s most demanding, and part of that is already been worked on with unannounced improvements to the driving characteristics of existing models (such as Auris) through better suspension tuning and more spot welds in the body to improve rigidity.”

“We didn’t make a big noise about this, but it’s been done.” he says confidently.

He also says that Toyota’s hybrid program has also been changed to include “Fun to drive, as well as low CO², and low cost of ownership.”

“So now is the time for us to deliver some fantastic product,” he says, “with more emotion and more fun, and we are starting with the new AYGO.”

…And who is to disagree. When the red and blue AYGO cars drove on stage for their big Geneva reveal there was a genuinely positive reaction from a normally skeptical press corps.

Created as part of a joint venture with PSA Peugeot Citroën and built at the alliance’s Czech Republic factory, Didier Leroy is delighted with the new model, which he says has a powerful design that marks the AYGO out from the other cars in the joint venture.

“Believe me, this will be perceived as a different car and the design selection is just what we requested. So we can’t say; ‘this isn’t what we want,’ we got exactly what we requested… It is 100 per cent our responsibility.”

He also says the joint venture is the only way to profitably produce the 65,000 AYGOs Toyota sold last year. “I cannot produce 65,000 AYGOs in one factory profitably,” he says, “If we were alone, I would have to stop the car.”

And finally, it’s time to talk fuel cell cars. Toyota announced that it will have a commercially available fuel cell vehicle in Europe within 18 months. You could wonder if that will affect its hybrid sales – that grew in Europe by 43 per cent last year to 156,000 units.

Didier Leroy doesn’t see it that way, and points out that Hybrid sales are on track to eventually occupy half of all Toyota sales in Europe, and in any case – fuel-cell cars use Hybrid technology.

He lays out his vision, which sees electric vehicles as having a key role in urban areas but limited use outside of cities, meantime fuel cell sales grow slowly as society tackles the issues of cost and infrastructure.

“Fuel-cell technology will take time before it takes off,” he says. “To help that happen we will bring a reasonable number of cars to Europe, limited in volume, but visible on the streets.”

And with that my tape recorder clicks off; time’s up. Didier Leroy jokingly slumps, “Now, I am off, just like your recorder” he grins.

He’s talked virtually non-stop for half an hour and with his next interviewer waiting outside, shows no sign of lagging. But then did you really expect him to?