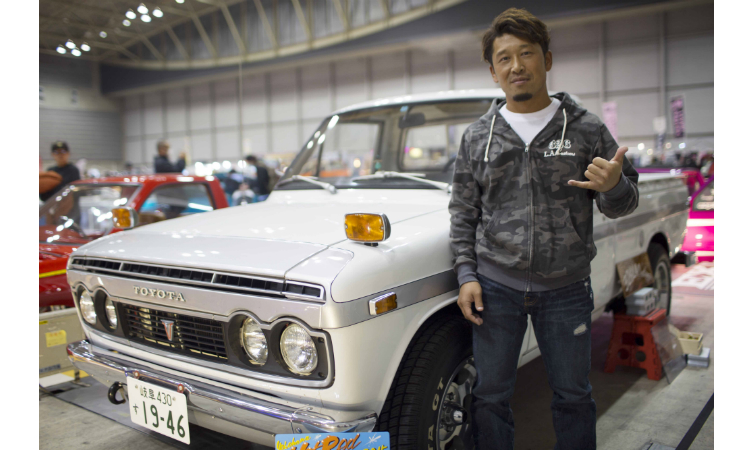 Think you know Hilux? It’s bombproof. It’s perennial. It’s a workhorse. Check all of the above. But there’s so much more. In fact, even if you’re a wool-dyed aficionado of the Toyota totem, unless you’ve been to Mooneyes, you don’t really know Hilux at all.

The Mooneyes Hot Rod and Custom Show is in many people’s opinion the greatest car and bike show on the planet. Every December for the past 24 years it has gathered the cream of custom culture from all over the world and brought them together, for the last few years in the gigantic Pacifico Hall in Yokohama – the historic port city at the heart of Tokyo Bay. And this year Mooneyes featured a special selection of Japanese trucks – at the heart of which featured a handful of stunning custom Hilux. 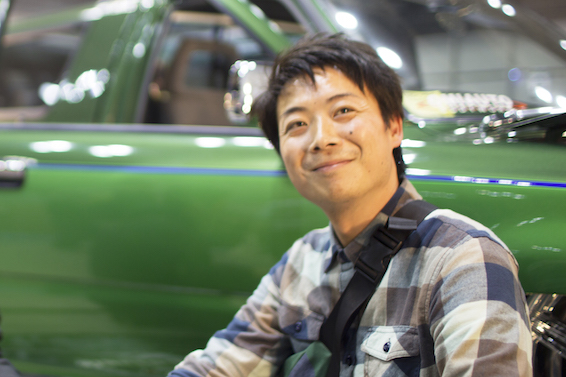 Tadomi’s Omitama-City based company is responsible for one of the most stunning entries in the show this year. It is a 1992 Japanese-Spec Hilux in an intense ‘Granny Smith’ green and is rendered with metal flaked blue flames. It has a hopped-up, remapped chromed and tweaked 2-litre MR2 phase two engine in the rear. The front engine compartment now houses an equally chrome clad fuel tank, and surrounding the motor there is the most intricate and beautifully finished air suspension system you have ever seen.

“The car took over 10 years to finish, he says. We are very proud of what we have achieved.” You can see the justified excitement in Tadomi-san’s eyes. 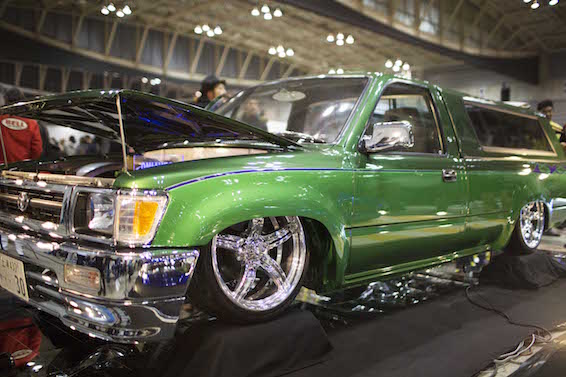 Most of the trucks featured in this year’s show are slammers – fitted with air suspension that drops the body of the truck right down on the deck – and is lifted once you’re ready to roll. The inspiration is of course from SoCal’s low rider scene.

Just how and why the cult-within-a cult of slammed Japanese trucks rose out of this cultural exchange remains lost to time and memory. You could come up with theories to do with hip hop music, the ‘gangsta’ aesthetic and the dissemination of these things via MTV in the eighties but I’ll spare you. It’s obvious and simple. Mid-nineties Hilux look particularly badass when you dose them up with all that engineering and artistry.

The Mooneyes show is a kaleidoscopic kind of trans-pacific cultural fusion in itself. It brings classic Americana together with a distinctly Japanese aesthetic.

The attention to detail brought to bear on the machines on show here borders on the obsessive. Fuse this passionate commitment to the small things, chuck in that bonkers Japanese sense of humour – mix with more than a heavy dose of reverence for the American masters of the custom craft and you have a candy-appled, metal flaked, chrome clad crucible like no other. If you’re into cars and motorbikes, you have to go to Mooneyes before you die. 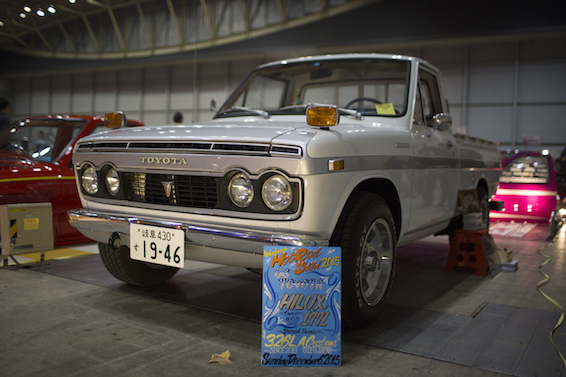 Dean Moon, the founder of the Moon brand, was part of the post war generation of Californians who created custom culture in its own image. This was a coterie of highly skilled and thrill-saturated young men with plenty of dollars and their discharge papers in their pockets. Hot-rodding and the custom scene was the creative outlet that focussed all that pent-up energy.

The boom time dreams of late forties and fifties America smelled of V8 engines at full rumble. The Moon brand soon became synonymous with this scene. Moon manufactured and marketed various products that would become talismanic in the world of drag racing and hot-rodding. But it wasn’t only the pressure gauges; the fuel tanks and the gear levers;  the Go Pedals and the Moon Discs that became essential elements of the Hot Rod ethos. Moon was a genius branding specialist way ahead of his time, even in commerce obsessed fifties America. Moon collaborated with artists and graphic designers that were creating the look and feel out there on the So-Cal boulevards. Soon the ‘Moon Eyes’ logo and Ed ‘Big Daddy’ Roth’s ‘Rat Fink’ were absolute analogues of the irreverence and attitude of all things custom. 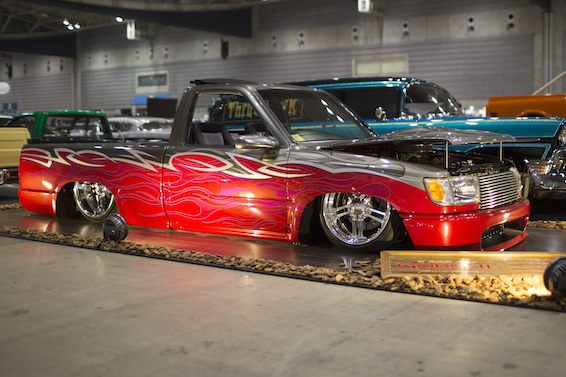 The Japanese have an amazing way of taking a cultural form and remaking it – often more intensely and with more detail than the original. And so it’s no surprise that once they picked up on hot-rodding and custom culture they would go nuts. They infused the way of looking at the world via the GIs that occupied Japan after the war – the vast majority of whom came and went out of the Yokohama port. Just as the local kids would dig the Americans’ high quality Military Surplus clothing – as well as the T-Shirts, the denim and the Rock’n’Roll records they would trade and sell – they also picked up on the cars they shipped over and hopped-up.

With the economic miracle of the sixties and seventies custom culture in Japan accelerated and spread all over the country.

Dean Moon died in 1987 and his wife kept Moon Equipment alive until she too passed away. In 1992 longtime Japanese Moon Equipment dealers Shige Suganuma and Chico Kodama bought the business and the new Mooneyes was born. They kept the original shop in Santa Fe Springs and opened a new one along with The Moon Café in Yokohama. The place soon became a focus for a worldwide culture. 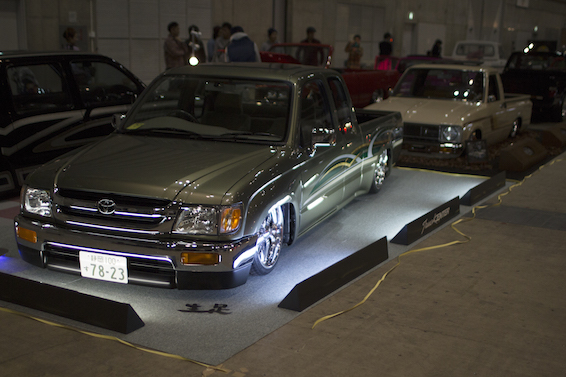 If it wasn’t for the Japanese lettering on the signage, Shizuoka, an industrial town a couple of hours south of Tokyo, could be Pasadena. There are broad boulevards; a gridded layout. Strip malls adorn the peripheries and every other light industrial space that line the highways seems to house an automotive workshops.

“I have been customising trucks for 25 years,” says Hisao Horiguchi. Hisao-San runs The Truck Center, which is housed in one of Shizuoka’s highways. Hisao is one of the stalwarts of the custom truck scene. He was responsible for the design and build of the Addams Family-like Hilux crew cab that stuck out of the crowd at Mooneyes.

This car was the dark counterpoint to the Omiauto’s Green Monster and was all the more appealing for its oblique references to all things mid-century American Gothic.

Genius of curators that the Mooneyes crew are, this amazing wagon was a bookend at the opposite side of the truck exhibit. Hisao was one of the earliest proponents of the noble slam in Japan, and is responsible especially for innovative ways of presenting air suspension. As a certified Moon dealer, his workshop is replete with rat fink references and homages to the Moon way of looking at the world. “I have been to California seven or eight times,” he tells me. “I love California”, he says. The cars are very special…”

We’ve got a secret for you Hisao-San. Your cars are pretty special too!

Read our other posts on Hilux here.

Get all the details on the current Toyota Hilux at toyota.co.uk. 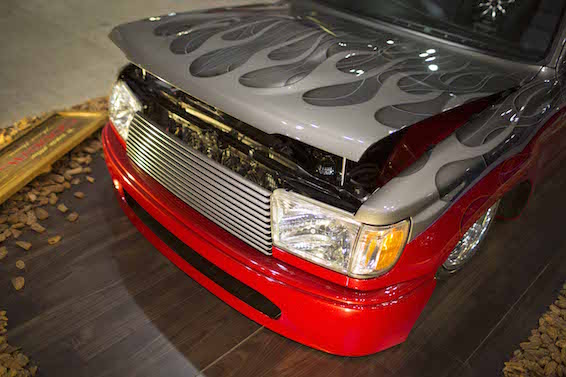 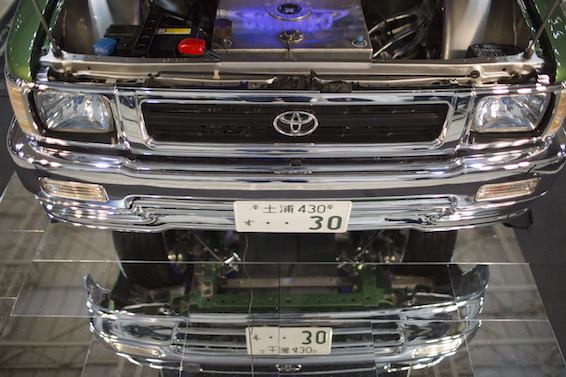 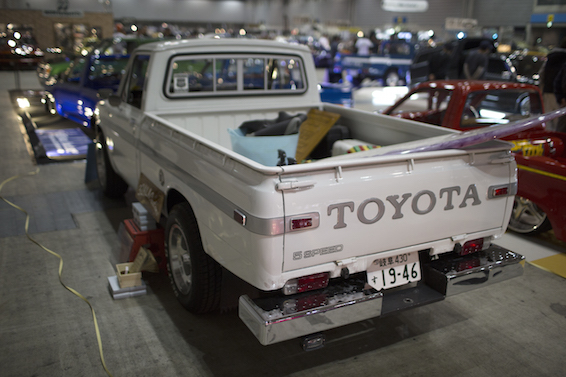 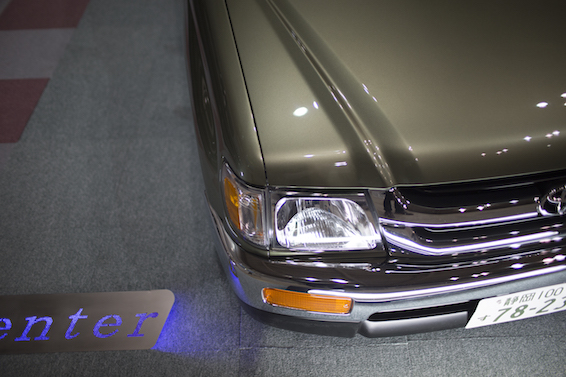 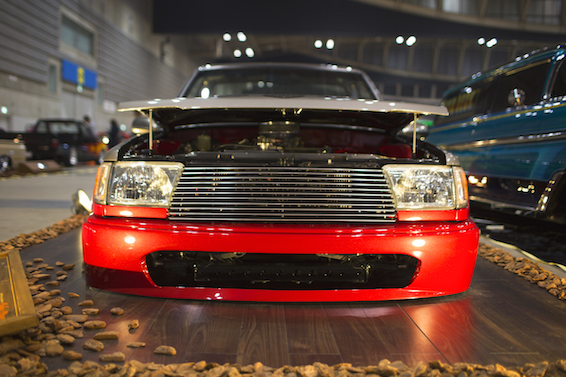 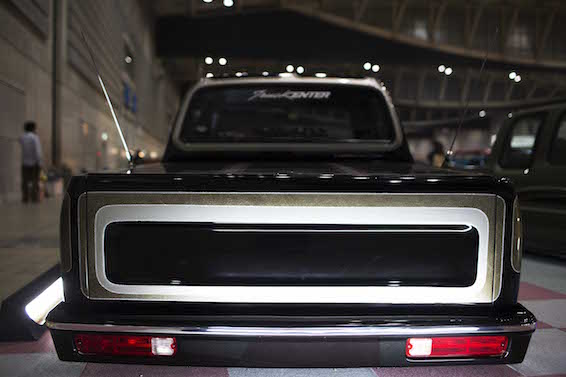 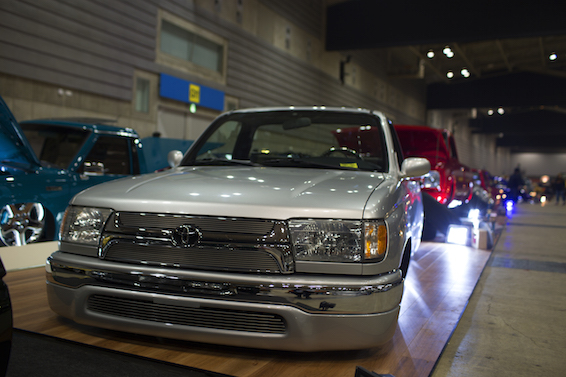 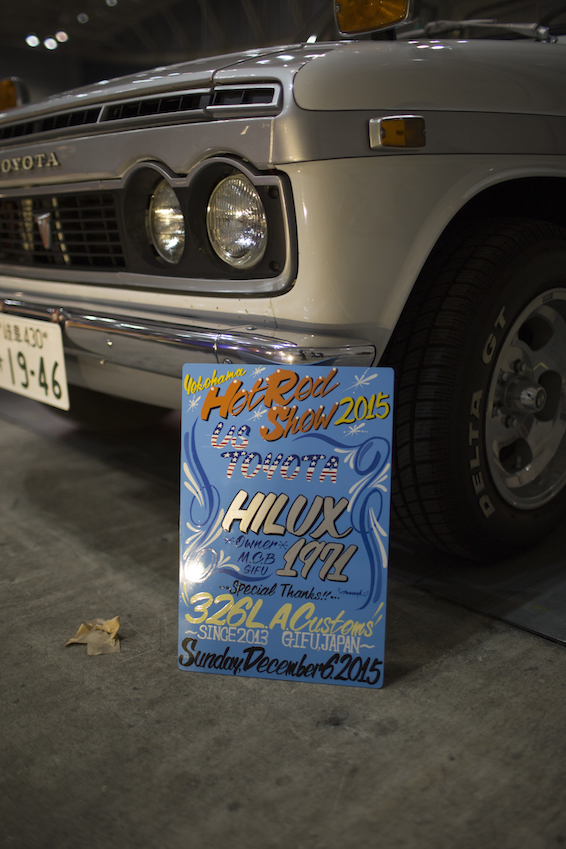