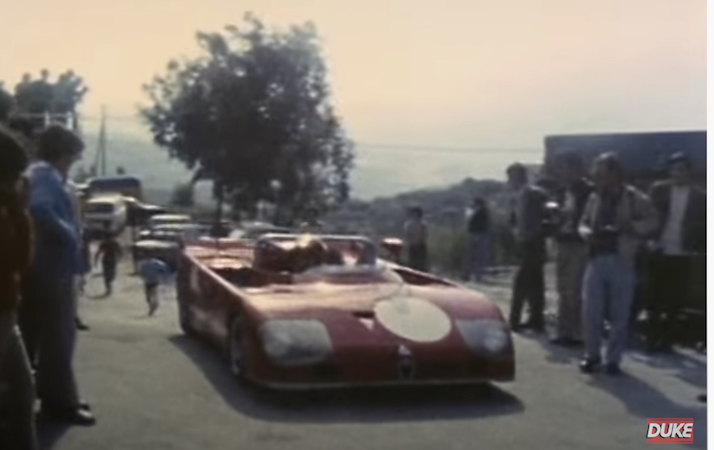 Naturally Toyota GB’s PR and Social Media team has to keep its finger on the pulse of the wider motoring world, which is why we enjoy settling down and watching films and videos featuring cars and bikes. Please understand this is purely in the interests of research…

In the current challenging global environment, we’ve increasingly found ourselves trading film recommendations across our virtual office. Which is why we thought we’d bring you our suggestions of quality motoring movies during this bank holiday weekend.

We’d love to hear your views on our selections and learn about your favourite car movie or video in the comments box below this article.

“The main problem with the Targa on practice days is sheep, and locals out for a joyride.”

When I hear certain F1 drivers moaning about things these days I’m often tempted to think they could do with listening to ‘Quick’ Vic Elford’s words from this magical film.

“Come on,” says Vic, almost certainly stubbing out a cigarette, “I’ll take you for a ride.” And does he; a lap of the infamous 45-mile Sicilian ‘circuit’ in the 3-litre Afla 33TT3, basically a fire-spitting V8 with a small seat attached to the front of it.

“This is the section where I usually have my practice accidents,” Vic explains, amid the sounds of that howling V8 as we watch him fly from hairpin to hairpin. “Two years ago in a Porsche I hit an Alfa Romero service car and last year [Vic chuckles], last year I hit a local.”

The Speed Merchants isn’t just about the Targa though – although as my favourite race of all time it would be fine by me if it was.

Narrated by Elford (perhaps the most effortlessly and accidentally cool racing driver of them all) and Mario Andretti, it’s a fly-on-the-wall documentary of their 1972 seasons. Back then a driver made his living by racing what he could get paid to race, and we watch the two of them compete at, amongst others, Daytona, Sebring, the Targa, the Nurburgring, Le Mans and Watkins Glen, in a vast array of machinery from F1 to rallying.

The film-makers’ access is incredible – behind the scenes everywhere, even inside the Alfa and Ferrari race HQs in Italy, and at home with the driver’s families (and given the attrition rate of drivers at this time those are particularly poignant scenes, as they get calls at home from team managers trying to put them in cars at a week’s notice – which they say yes to of course). “Sometimes it doesn’t come cheap,” drawls Andretti. “Sometimes you get away with it.”

The cars are fabulous, the racing is breathtaking, but it is the vibe that makes this one of the greatest of motor racing films. Seventies hair, glorious chronographs, chain-smoking, beer, sunglasses worn unironically and beach parties the night before race day; and some of the bravest and best drivers of all time.

And not one of them had a personal stylist.

Mad Max, which combines my enthusiasm for post-apocalyptic sci-fi with cars, feels like too obvious a choice, likewise Spielberg’s Duel, which draws some vague parallel with Mad Max through the loneliness and isolation. Maybe I like driving long distances. On my own…

So, for that reason, I’m choosing Alex Cox’s Repo Man. I watched it when I was about 14. I had no idea what it was in the trunk of the Chevrolet Malibu then. Still not sure now.

You could have guessed that it would be a motorbike film from me but don’t let this put you off. The World’s Fastest Indian is a real heart warmer, made all the more loveable because it’s based on a true story. I forgive all embellishments, proven and probable, because they only serve to enhance the romance of the tale – the transgender motel receptionist, the urinating on the lemon tree, the depiction and result of the record itself.

Watching the story of motorcycle mad New Zealander, Burt Munro, unfold is simply charming. In a nutshell, Burt worked, ate and slept in a flat-roofed, self-built garage – his Indian and Velocette motorcycles occupying the only dry corner. He constructed a salt flats racer from a 1919-designed Indian Scout, taking decades to hand-make both internals and bodywork that would withstand a top speed of 205mph.

From the humble beginnings of an 18hp motorcycle which would have maxed out at 55mph, Burt spent more than 40 years perfecting his Indian. He entered local races and speed trials along Oreti Beach near his Invercargill home and went on to take several national records (actually glossed over in the film) before landing the sub-1000cc land speed record at Bonneville.  Nobody has since ridden an Indian motorcycle faster.

Obsessing slightly over the film, I’ve ticked off a few of its notable sights. I’ve driven along Oreti Beach (Land Cruiser, naturally), seen the parts of Burt’s bikes that are on display at E Hayes hardware store. Yes, a hardware store! I’ve had my picture taken with Burt’s statue in Invercargill and I’ve set foot on the legendary salt flats of Bonneville (Camaro SS)… actually, on that American West trip, I also visited Folsom Prison but that’s a whole other obsessive pursuit!

The anti-hero of this gripping crime-flick (ultra-suave Alain Delon) chooses to cruise around in a look-at-me ’66 Plymouth Fury, bouncing (literally) over the cobbled boulevards on his way to pull off a daring jewel heist. Perhaps not the wisest choice of wheels when you want to keep les flics off your trail. Cars or no cars, this is a cracking movie from the godfather of the French New Wave cinema. Melville even gets his own beloved Mustang into one of the shots.

For those who want to test their I-Spy skills, a list of cars from the film can be found on the addictive Internet Movie Cars Database (IMCDB.com).

That man James Clark appealed for us to choose a film or documentary for this selection, but I’m breaking the rules and recommending an entire YouTube channel. You’ll thank me, because VHS Rallies is enough to send any self-respecting rally enthusiast down an online wormhole from which they will likely only emerge, bleary-eyed, many days later.

Unofficial and unapproved, this online resource of rally films sprung up just a year ago and specialises in rare archive footage from some of rallying’s golden years. The dedicated individual running the channel describes themselves as an ‘OCD rally fan, converting old footage from VHS to digital, before it deteriorates beyond the point of no return’. That’s right: somewhere out there is a devout bobble-hatter who is painstakingly converting tattered old video tapes (young’uns, ask your Dads to explain what they are) to a modern, easy-to-access format that can be enjoyed by thousands.

It’s an incredible labour of love and has quickly become one of the best sources of historical rally material out there, even more so during the lockdown. It’s impossible to pick a channel highlight and much better to dive in to one of the 150-plus films at random. Pleasingly, Toyotas feature heavily; check out this clip of the 1990 Rally du Condroz featuring Patrick Snijers and his utterly gorgeous Bastos-liveried Celica GT-4.