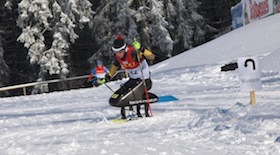 Paralympian Andrea Eskau, whose sit-ski sled was co-developed by Toyota Motorsport GmbH, has won her first gold medal at the Paralympic Winter Games in Sochi.

Eskau topped the podium in the women’s 6km biathlon (sitting) on Saturday, ahead of Russia’s Svetlana Konovalova and Ukranian Olena Iurkovska. The gold is her first in the winter games, adding to the two she won in cycling at London 2012 and the silver and bronze she took home from Vancouver in 2010.

She completed the biathlon course in a time of 20:26 with no missed shots, giving her the win by a margin of almost 20 seconds.

There was a reversal of fortune the following morning, as Andrea failed to finish in the women’s 12km cross-country skiing.

However, she still has plenty of chances to add to the German medal tally as she will compete in the women’s 1km sprint and 5km cross-country skiing and the 10km and 12.5km biathlon this week.