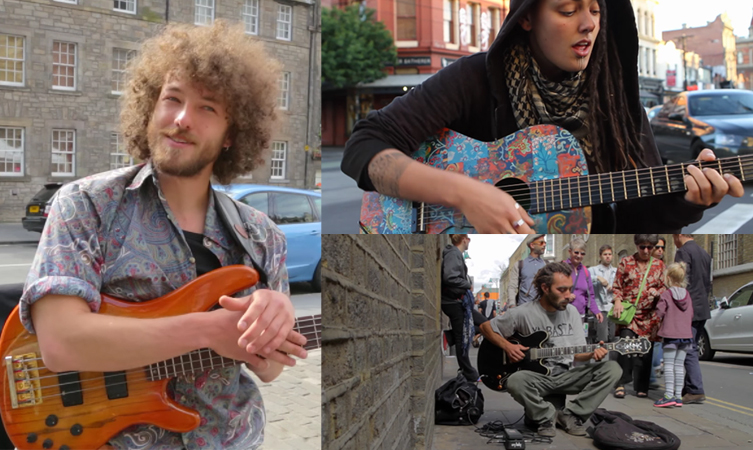 Edinburgh-based blues artist and busker Wojtek Gasiorowski has won a place in the ‘Global Sreet Band’, a six-piece comprised of the world’s best buskers which was formed as part of a Toyota-backed contest called ‘Feeling the Street‘.

Launched in March,  Feeling the Street was an online competition designed to find the world’s best buskers and merge them together to form a band for a tour across New Zealand.

Hundreds of musicians from around the globe entered by uploading a video of themselves playing an original song live in a street location. A global online audience then voted for their favourite by throwing virtual money in the hats of the musicians whom they liked best.

Wojtek describes his style as “Bass supported with beatbox and looper to create unique compositions and live performances with a core element of improvisation.”

Three other UK-based artists narrowly missed out on a place in the band. They were: London-based beatboxer ABH Beatbox, blues artist Ill Chippo and singer/songwriter Megan Hope.

You can see all three in action below.

22-year-old ABH Beatbox has been performing professionally for the past four years and according to his Twitter account he is ranked in the top 40 beatboxers in the UK. ABH says: “Winning this competition would be amazing for me.”

Originally from Portugal, Ill Chippo arrived in London in 2012 and describes himself as ‘a blues man’.

“I started performing on the streets shortly after my arrival here in London,” Ill explains.

He adds: “I have been playing my guitar for about 20 years and I try to be creative every time I play it. My main influences are early blues and psychedelic rock.”

Megan and her guitar have been travelling the world for several years – in fact she’s known as the ‘Dub Princess’ in Australia. Megan describes her style as a combination of soulful Reggae, Jazz, dubstep and hip-hop.

Meg says: “Travelling presents a brilliant way to hear different types of music. People experiment so much on the streets. There are people who just travel the world busking which opens up doors and opportunities to play at different places, meet new people and learn about yourself.”