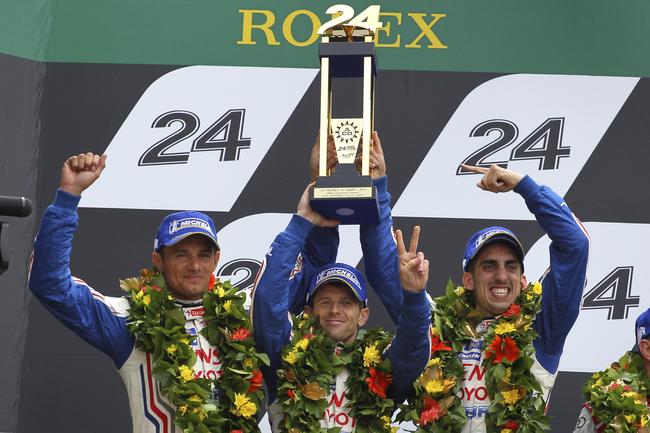 It’s arguably the greatest motor race of all: the Le Mans 24 Hours… The French twice-around-the-clock race is one of the most watched sporting events on the planet, and this year, there could be an upset of historic proportion, writes Charles Bradley, Editor of Autosport Magazine.

Don’t tell the bookies, but there’s a new favourite for victory in the 2014 French sportscar classic – and, for once in recent times, it’s not Audi. It’s Toyota.

Audi has won every Le Mans 24 Hours race since the turn of the millennium, bar two (sister firm Bentley prevailed in 2003; Peugeot pulled out all the stops to win in ’09). That’s a dozen victories, an amazing 60,247kms worth of success, have been earned by the German giant. “Vorsprung durch Technik,”; or “Advancement through technology” as they love to say at Audi HQ in Ingolstadt…

By comparison, Toyota’s Le Mans record isn’t quite so sprightly. In fact, it’s non-existent in terms of victories despite some promising efforts.

Although past form is no guarantee of future performance, you only have to look at the Toyota TS040 HYBRID’s results in this year’s World Endurance Championship for evidence of a seismic shift in form.

This year’s LMP1 prototypes, the fastest sportscars on the planet, have undergone a transformation for 2014. Hybrid technology has been a part of this class for the past couple of years, but now it is utterly intrinsic in its make-up and key to the pecking order. When you consider that category ‘newcomer’ Porsche has built a tiny V4 engine, turbocharged to 500bhp, you can see why its 250bhp-worth of energy recovery systems is key to its speed.

But neither Porsche, which is returning to Le Mans in the top class as a works team for the first time since it last won overall in 1998, or Audi has been able to hold a candle to Toyota in the two WEC races this year.

At the Silverstone opener, Audi made some dreadful decisions to leave its cars out on slicks in wet weather – both its cars were subsequently written-off in huge accidents. Meanwhile, Toyota cruised to an easy 1-2.

At the wondrous Spa-Francorchamps circuit in Belgium, Toyota won again. This time, and Audi made it to the finish but in second place, 1m13s behind Toyota #8 (crewed by Anthony Davidson, Sebastien Buemi and Nico Lapierre), but just a few seconds ahead of the Toyota #7 (Alex Wurz, Kazuki Nakajima and Stephane Sarrazin), which was blighted by handling issues.

Of course, Le Mans is very different proposition to those six-hour races. Four times the duration on an ultra-low downforce track featuring a grid of 56 cars – there are plenty of pitfalls to trip over, such as Anthony Davidson’s spine-fracturing flip in 2012.

Last year’s race was run under the safety car for five and a half hours, and was marred by the death of Aston Martin racer Allan Simonsen.

Toyota finished second and fourth last year to Audi’s first and third. But this year’s Le Mans is likely to be focused on the technology war, as much as the driver line-ups, and it’s here where Toyota packs its real punch. Having raced with hybrid technology since 2007 in Japan, this car is unique in using supercapacitors (as opposed to batteries or flywheels) to store its electrical power.

With all the energy-retrieval systems deployed – 50 per cent more than last year’s car – the V8 petrol-powered TS040 HYBRID has almost 1000bhp on tap. And four-wheel drive. No wonder then that top driver Wurz, a Formula 1 veteran no less, says: “It feels like a rocketship!”

As I mentioned earlier, ‘Advancement through technology’ is a phrase well used in the native German tongue when referring to Audi, especially its revolutionary Quattro technology of the 1980s.

But, with Toyota basing its motorsport operation in Cologne, is Audi about to get beaten at its own game in more ways that one?

We don’t have long to wait  until we find out…