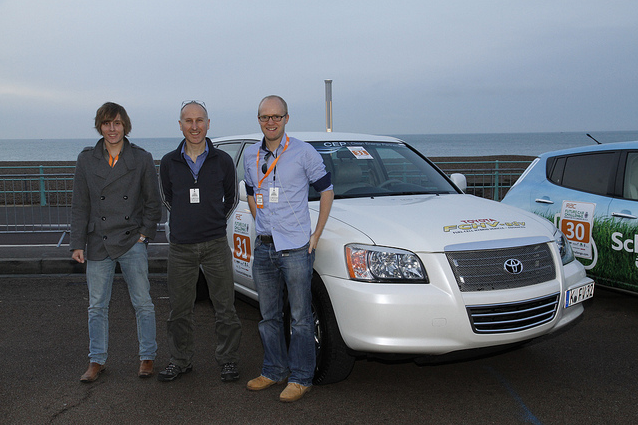 Toyota’s Prius Plug-in Hybrid has wasted no time in demonstrating its fuel-frugal character, carrying off a class win in the 2011 RAC Future Car Challenge on 5 November.

Piloted by The Telegraph’s Andrew English and thegreencarwebsite’s Faye Sunderland, it was the first outing for the production-ready car on British roads ahead of its launch in the UK next year. The team marked the event with a best-in-class 94.2mpg average fuel consumption over the 60-mile route from Brighton to London.

Prius Plug-in Hybrid delivers the “best of both worlds” in terms of fuel efficiency and low emissions, and an uncompromised driving range thanks to a powertrain that features a high-capacity, rechargeable lithium-ion battery and an ultra-efficient 1.8-litre petrol engine with intelligent valve timing (VVT-i).

The advanced battery technology allows the car to be driven for around 14 miles on its electric power alone – with no tailpipe emissions and zero fuel consumption. Once Prius Plug-in Hybrid has reached the limits of its electric range, it switches seamlessly to its full hybrid system, bringing the petrol engine into play. This means the driver can avoid the range anxiety associated with all-electric vehicles.

Recharging the battery is quick and simple, taking about 1.5 hours for a full charge. Toyota demonstration programmes for the plug-in hybrid technology, including one in progress in London with EDF Energy and fleet operators from the public and private sector, have already produced real-world data that show the benefits it can deliver in terms of reduced emissions and lower fuel consumption. Toyota anticipates CO2 emissions below 50g/km and combined cycle fuel economy of 134.5mpg for the production version.

The RAC Future Car Challenge also gave Toyota the opportunity to once again show its FCHV-adv hydrogen fuel cell vehicle on the road, driven by the Press Association’s Matt Kimberley, Ben Lane from nextgreencar and iCar’s Jeremy Laird (pictured above). Producing no other emissions than water from its power system, the vehicle demonstrated technology of the near-future: Toyota is due to bring its fuel cell hybrid technology to the market in 2015.

The technology of today was also showcased by the British-built Auris Hybrid, driven by Don Wales, the world land speed record holder for a steam powered vehicle, and his son Joe. For more pictures of all the Toyota vehicles at the 2011 RAC Future Car Challenge, click here.