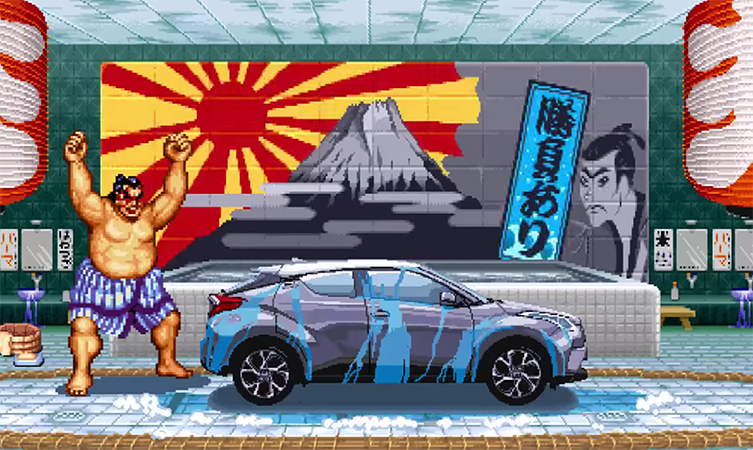 We now have the answer to a question we never thought we’d ask: How would the Toyota C-HR get on if it was a character in Street Fighter II?

The answer, courtesy of a new video from Toyota Japan, is flawless.

The pixel-tastic short sees iconic fighter Ken get behind the wheel of the compact crossover for a tour of the Street Fighter world.

On his journey he gets a car wash courtesy of E Honda, pops a wheelie in front of Zangief and even goes head-to-head with series supervillain M Bison. Laser eyes, however, are not a feature available on the C-HR in our universe.

The video is part of a series of Crossover the World films by Toyota Japan, which embed C-HR into the worlds of some of Japan’s most loved games, toys and animations.

Another film sees the C-HR shrunk down to Tomica size, where the compact crossover is made even more compact as three models shoot through a huge toy car playset.

Tomica has been making die-cast car models since 1970, and has paid tribute to plenty of Toyota models in its time. The C-HR joins prestigious company like the 2000GT, GT86 and even the Crown as a Tomica model.

Two other films added to the series also cover major Japanese cultural landmarks. The third short places the C-HR into the Fist of the North Star manga universe.

The fourth film is set in the world of Neo Tokyo, a classic 1987 anime which depicts a futuristic Japanese capital city.

What do you think of the Toyota Japan films? Let us know in the comments below.