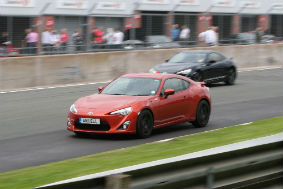 What better way to mark the second anniversary of the Toyota GT86’s UK launch than to bring together a bunch of enthusiastic GT86 owners and let them explore their cars’ abilities on track? Sounds like the perfect waku-doki experience to us!

Around 50 GT86 owners from around the country were invited by Toyota to attend a special GT86-only track day, held at MotorSport Vision’s fantastic Oulton Park circuit in Cheshire. Unlike some other UK circuits that are built on the flat locations of former air bases, Oulton Park is a purpose-built race track that winds through the undulating Cheshire landscape, providing drivers with plenty of elevation changes, low and high-speed corners, and long straights to really open up the throttle. The ideal playground for the fun and dynamically gifted GT86, in fact.

The day got underway with a safety briefing at 8.30am, meaning an early start for some of the enthusiastic owners – one couple travelled all the way from Bristol to join in the action – but it was worth the effort as a full day of track time lay ahead, split into two four-hour sessions either side of the hour-long lunch break.

The Toyotas had the pit lane all to themselves for the entire day, and with the cars parked up in classic Le Mans-style formation, it was fascinating to see the variety amongst the assembled GT86s. All seven colour options were represented, with the pearlescent 37J GT86 White and metallic D45 GT86 Black seemingly the most popular. A lot of owners had also chosen to personalise their cars, many selecting optionally available accessories and upgrades from the official TRD range.

Yet the focus of the day was on the driving, and with MSV instructors on hand to help the GT86 owners get the most out of their cars, it was a rare moment when you couldn’t hear the distinctive burbling engine note of at least one GT86’s 2.0-litre D4-S boxer engine singing its way around the circuit. Chatting with the owners, it was clear that the sporty coupe’s exploitable on-road performance and fantastic handling shone through even more brightly on track, with a number of owners noting that their own driving ability would be found lacking before reaching the GT86’s limit. “The car proves itself to be more than capable,” explains owner Shaun Kent, “I’ve never had any moments where I’ve felt like I wasn’t sure of my surroundings or sure of what I was doing. I have complete confidence in the [GT86].”

As a special treat Toyota also brought along a GT86 CS-V3 race car, built by Toyota Motorsport GmbH (TMG). It is a dedicated race car designed and built for the TMG GT86 Cup that runs alongside the VLN endurance racing series held at Germany’s Nürburgring race circuit. The GT86 CS-V3 is closely related to its road-going sibling, albeit with stiffer suspension, slick tyres and extra safety measures like a roll cage. Still, the engine and gearbox remain virtually the same as found in a standard Toyota GT86.

The GT86 CS-V3 was on hand to let the owners experience what it was like to push the GT86 to its limits on track – from the passenger seat, of course! Behind the wheel was racing driver Jolyon Palmer, a man clearly accustomed to going fast as he currently leads the 2014 GP2 championship, the feeder series for Formula One.

Good fun day at Oulton Park with @ToyotaGB. Doing hot rides in the GT86 – the perfect car for the job! pic.twitter.com/NPu7bfvsma

Palmer isn’t only fast, but he’s also a man of discerning tastes, having chosen a GT86 as his daily-driven road car. He was quick to praise the GT86’s excellent chassis control and brilliant balance of power and agility, qualities enhanced in the GT86 CS-V3. It was high praise indeed, proving that Toyota’s award-winning sports car is accessible and thrilling for normal drivers, and can still entertain and reward a genuine racer.

Away from the Fosters Circuit, there was also the opportunity for owners to explore the responsiveness of the GT86’s steering and throttle control on Oulton Park’s low-grip handling track.

With the track surface kept artificially wet and the safety net of the GT86’s traction control disabled, owners learned how to react to and control a slide using deft throttle inputs and counter-steering methods. Like the circuit action, it was conducted in complete safety under controlled conditions, emphasising the benefit of the track day experience for anyone wishing to push their GT86 beyond the bounds of what is safe and legal on the road. GT86 owner David Gracie, who brought his eight-week old, 14-plate GT86 along for its second track day in two weeks, remarked on another aspect of the GT86’s appeal: “I like the fact that [Toyota] put non-performance tyres on it on purpose, just so you can have more fun in it and the limits are more accessible.”

As Toyota’s second GT86 track day drew to a close, the waku-doki-induced smiles up and down the pitlane were evidence enough that all the owners had a fantastic day. For many of them, their very first encounter with the GT86 had convinced them to buy one, and the longer they were exposed to the sports car’s charms and abilities, the stronger the bond between owner and car became.

The opportunity to get out on track at Oulton Park and experience the GT86’s impressive abilities in even greater depth was one that none of them regretted, and was the perfect way to begin a weekend of celebrating Toyota’s sporting heritage.

As one of the guests put it…

Finally home after an awesome day, big thanks to @ToyotaGB for the #GT86OwnersDay. Same time next year…?

Read more about the Toyota GT86 on the Toyota blog, or find out greater detail at the designated section of the Toyota GB website.