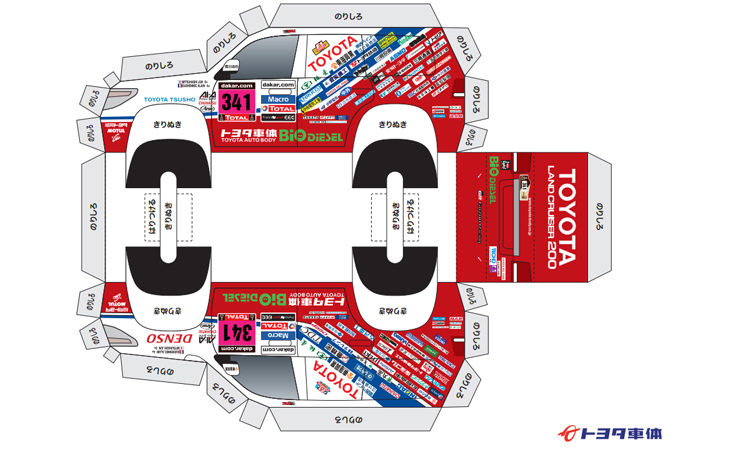 Toyota subsidiary Toyota Auto Body Co has produced a paper version of its biodiesel-fueled Land Cruiser for you to cut-out and build.

Toyota Auto Body entered the real car into the 2014 Dakar Rally in January, and it is notable for emitting 60 percent less carbon dioxide than regular diesel Dakar competitors. The bio-diesel upon which the four-wheel drive Land Cruiser runs is made of used cooking oil, further strengthening its green credentials and in-keeping with Toyota’s environmental leadership.

The Land Cruiser has a long history of success at Dakar, first competing in the rally in 1979. Until 1984, the model was driven privately, and not officially affiliated to Toyota. That same year, a then current-generation Land Cruiser FJ60 finished in 3rd place, while an earlier FJ45 model took 2nd.

In 1995, Team Araco (Now TLC) raced a single, unmodified Land Cruiser 80 at Dakar to commemorate the production of 2.5 million units.

The following year was a triumphant one for the car when Team Araco entered two vehicles, and took the top two podium positions in their class (Unmodified Diesel).

2001 was a special year for Land Cruiser, as the car celebrated its 50th anniversary. It was also the year that the rally duration was extended to 21 days and a new restriction of no air mechanic support introduced. Araco returned, and successfully toasted the car’s half century by winning the class championship in the second of its two entered cars.

It wasn’t until 2005 that the decals on the Dakar Land Cruiser began to resemble those of the Toyota Auto Body cut-out. That’s because this was the first year that the car competed as Team Land Cruiser Toyota Auto Body, as apposed to Araco. Another first for 2005 was the rankings of the three Land Cruisers that Auto Body entered; each occupied the podium positions in the unmodified production group – a Dakar first.

The Land Cruiser’s mixture of peerless reliability, comfort, and monumental toughness ensure that Toyota Auto Body continues to race the cars in the Dakar today, and while we can’t promise that your version will be capable of taking on the grueling 5,280 mile rally; it will look great on your desk!