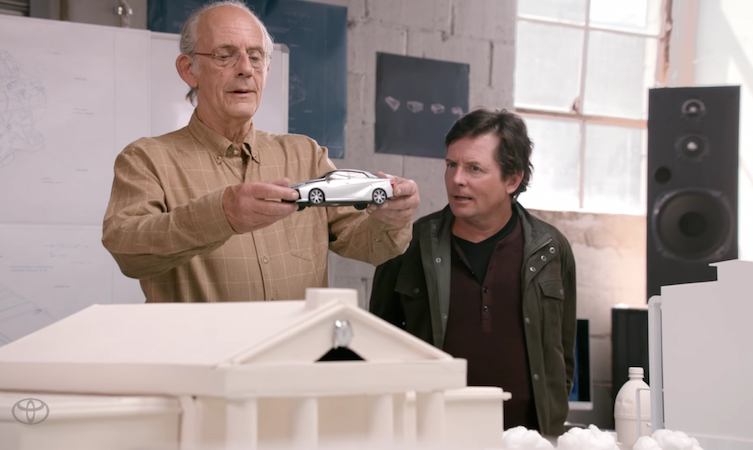 As fans around the world mark the occasion, Michael J. Fox and Christopher Lloyd – who play Marty McFly and Doc Brown in the trilogy – have appeared in the latest ‘Fuelled by Everything‘ film created by Toyota USA to mark the official on-sale date of the Toyota Mirai in the country.

Watch ‘Fuelled by the Future’ below.

The film explains that the Mirai is a little bit like Doc Brown’s DeLorean – not because it can hover, or travel through time when it hits 88mph – but because it can be fuelled by household rubbish.

Michael J. Fox said: “Over the years we’ve had a lot of fun predicting which Back to the Future fictional 2015 technology would arrive by the real year. I think fans are going to have a good time with what Toyota sees as a true possibility for transportation. It’s actually really cool.”

As Toyota’s ongoing Fuelled by Everything campaign has demonstrated, hydrogen fuel has the potential to be produced from renewable energy sources like solar, wind and biogas. The vehicle’s only tailpipe emission is water.

“This Back to the Future inspired milestone has taken 30 years to arrive, and Toyota has been developing hydrogen fuel cell technology almost that long,” said Bill Fay, Toyota division group vice president and general manager.  “There’s no better way to generate excitement for a turning point in automotive history than with a film that celebrated the possibilities of the future.”

“While there are a lot of brands that are celebrating the Back to the Future milestone, Toyota stands apart for their nod to the future and the past with the auto technology depicted in the movies,” said Bob Gale, Back to the Future co-creator and producer. “When Toyota approached us about helping tell a bigger story about the future and innovation with the Mirai, we loved the direction – and who can resist Marty’s retro Toyota truck?”

Find out more by visiting toyota.com/outatime.