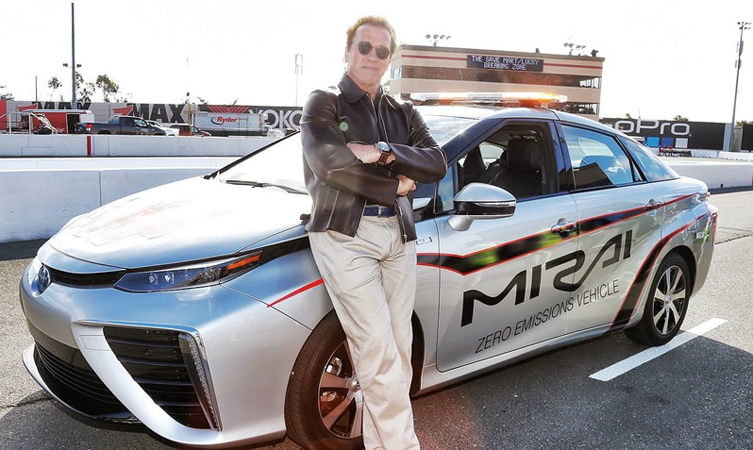 Not only was the Toyota Mirai the pace car at the NASCAR sprint cup race in Sonoma, California last weekend, but the driver behind the wheel of the hydrogen fuel cell car was none other than Arnold Schwarzenegger.

The actor lead the field in the Mirai at the start of the Toyota/Save Mart 350 race.

The #TSM350 field led by @KyleBusch is waiting behind the #ToyotaMirai pace car at Turn 3 at @RaceSonoma! #NASCAR pic.twitter.com/7HIhftiJ7O

“It will be an honour to lead these fantastic athletes and champions around the raceway, and on top of it, I get to drive a car that is both powerful and green,” said Schwarzenegger ahead of the race.

Come with me… In the @NASCAR pace car. The iPhone didn’t handle the acceleration too well. #TerminatorGenisys pic.twitter.com/a4OiHzvqNV

It proved to be a good day for Toyota, as Kyle Busch, in the Toyota Camry, went on to win the race.

The Toyota Mirai will be launched in the UK later this year. It uses the Toyota Fuel Cell System (TFCS), which features both fuel cell and hybrid technologies and which makes use of Toyota’s new fuel cell stack and high-pressure hydrogen tanks. The TFCS is more energy efficient than internal combustion engines and emits no CO2 or pollutants when driven.