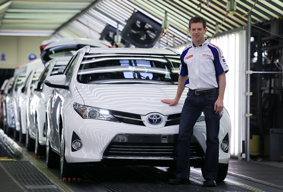 Toyota Racing driver Anthony Davidson took time out from his preparations for the World Endurance Championship season to take delivery of a new set of wheels for life away from the race track.

The 34-year-old British driver called in at Toyota’s Burnaston factory near Derby to pick up a new Auris Hybrid Touring Sports. The top-of-the-range Excel model, finished in Pearl White and kitted out with a Skyview panoramic roof, is his second Auris wagon – a model that’s built exclusively in the UK.

It may not be able to match the impressive horsepower and pin-sharp handling of his new Toyota TS040 Hybrid race car – set to undergo pre-season track testing later this week – but it’s ideal transport for Davidson’s young family. Anthony and wife Carrie have two young children, plus a family dog, all of whom can be carried in comfort and safety in the Touring Sports’ spacious and comfortable interior.

Davidson and Toyota Racing will embark on their new season at Silverstone on 20 April, aiming to sustain the performance that saw the team take victory in the closing round of the 2013 championship in Bahrain.

British fans will have a further chance to see Davidson and Toyota TS040 Hybrid at the Goodwood Festival of Speed at the end of June.

To find out more about the Auris Touring Sports range, or to arrange a test drive, visit the designated section of the Toyota website.