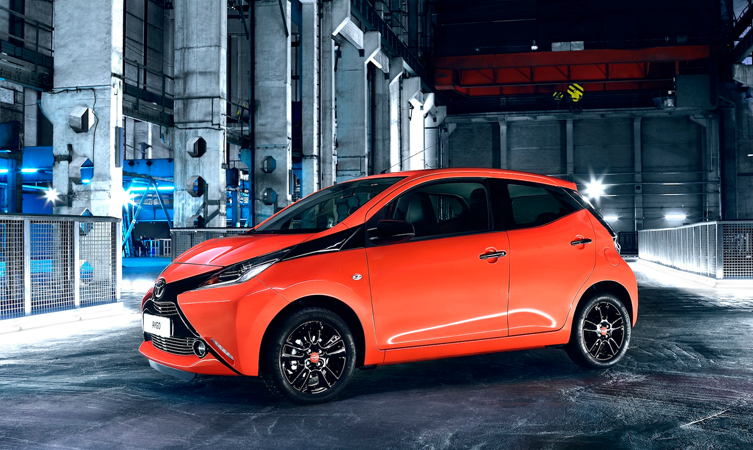 The fun starts here! The all-new Toyota Aygo has finally been revealed, and these are the first official pictures.

Two versions of Aygo are unveiled at Geneva motor show, the standard Aygo, and the Aygo ‘X-Wave’, which is fitted with a power operated canvas top.

Daniele Schillaci, Senior Vice President Sales and Marketing of Toyota Motor Europe said at the launch of the car at the 2014 Geneva Motor Show: ‘When it came to developing the new Aygo, we had a strong foundation from which to work… But we wanted to do more.

‘For inspiration we turned to Japanese youth culture, we wanted a car that meant owners could customise each and every part to their own personal taste…

‘Welcome to the changing face of Toyota. We want to put smiles on the faces of owners. We want to enable them to have fun.’

From the bold new ‘X’ design that’s splashed across the front of the car, to the huge range of customisation options available, new Aygo builds on the strengths of its popular predecessor with the same playful focus on design and drivability.

At present , exact plans for the UK line up are still being finalised, however, what is confirmed is that the car will set new standards for personalisation – at the core of which is the ability for owners to change the look of their cars.

New Aygo is fitted with a series of interchangeable parts, which allow owners to modify key elements of the design.

On the exterior, it’s possible to change the colours of the X-shaped front grille, rear bumper insert, front fender garnish and alloy wheels.

Inside, it’s possible to do the same with the instrument panel, centre console, air vents, gear shift knob and lever surround.

Changes are simple and quick to make, on the basis that some owners might want to adjust the look of their car more than once.

A wide selection of compatible apps allows the driver to access navigation and social media channels.

Toyota x-touch uses a 7” full-colour touch screen fully integrated within the instrument panel. It is the first system in any city car to have a rear view camera fitted as standard.

The main menu has a simple, five icon structure, offering at-a-glance identification of all functions for an intuitive user experience.

The ‘Audio Source’ menu groups together AM/FM radio, optional DAB reception, music streaming via Bluetooth, and audio via AUX and USB, with the facility to display album cover art.

When the audio system is turned off, a large digital clock featuring retro, ‘flip-over’ numerals is displayed, adding a playful touch to the system design.

Via the ‘Phone’ function, the driver can access contacts, make phone calls and use an on-screen send/receive function for text messages.

A new MirrorLink function can be activated through the ‘Connect’ menu. Once a compatible smartphone is connected, MirrorLink will replicate the phone’s screen and compatible apps on the x-touch display. Smartphone functions can then be easily accessed via the system touch-screen itself.

One of the lightest engines in its class, the popular powerplant features numerous improvements that enhance performance and help deliver class-leading fuel efficiency and CO2 emissions.

The compression ratio has been increased from 11.0:1 to 11.5:1. The combustion chamber now benefits from better cooling, and a high tumble intake port ensures an optimal air/fuel mix in the cylinder. The Variable Valve Timing programme has also been optimised.

Next, friction losses were reduced through the adoption of a low friction timing chain with an auto-tensioner. Diamond-like Carbon (DLC) valve lifters and a twin-tank oil pan further contribute to reduced internal resistance.

And finally, what was already one of the lightest engines of its type was made even lighter by fitting a cylinder head with a built-in exhaust manifold.

New x-shift transmission is available as an option on new AYGO.

This improved automated manual transmission has a fully automatic shift mode and no clutch pedal, using computer control to synchronize engine, clutch and gears for quick and precise shifting.

The gear ratios have been revised for a better balance of driving pleasure and fuel economy, and there are new modes to help the driver tune the car to their liking.

Selecting E (Easy Mode), M (Manual) or R (Reverse) allows the car to ‘creep’ like a conventional automatic. In E mode, the system selects a suitable gear according to the accelerator pedal, vehicle speed and driving conditions.

New Aygo’s x-shift is equipped with the kick-down function standard to automatic transmissions. Moreover, it is possible to override the system temporarily by using the steering wheel-mounted paddles.

Selecting M mode allows the driver to manually change gear via either the shift lever itself or with the paddle switches.